The officers on the bridge are not having an easy time. The nice weather with the relative high temperatures creates prolonged periods of reduced visibility and thus the ships whistle kept going all through the night. Only when entering the bay of Qaqortoq did the curtain suddenly open up and was it clear again. Less cold water enters the bay, the rocks maintaining the warmth overnight and the mountain ridges shelter the area from the cold wind. In the bay it was as clear as a whistle but outside the white wall remained all day long. 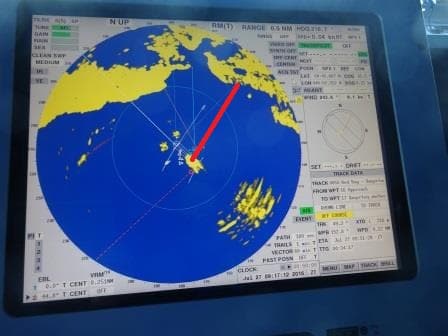 This time a shot of the Radar without a chart which shows the area. The red line is the tender route to the dock.

Greenland has not been much in the picture of the maritime world yet as the area has still not been digitized as far as the sea charts are concerned. We can now sail over most of the globe with the chart on the Radar, so the radar picture overlays the chart (and hopefully merge exactly) but not in Greenland’s waters. To go onto the Radar, the charts have to be digitized and also verified for the correct standard of digitization. Greenland is not there yet and thus for the coming days, we have to pull out the paper charts and do it the old fashioned way with ruler and pencil. But we also had the two local pilots on board who ensured we stayed on the dotted line. 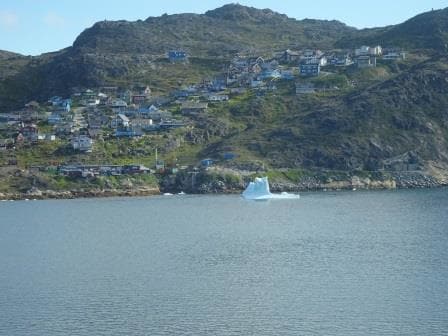 This is as close as we have come to an ice berg thus far. A poor lonely boy which has ran aground and is now melting away.

We were supposed to see Ice bergs, but as it was a small white world, we did not. Luckily with the modern radars the larger ones do show up on the Radar and also the pilots have the ice forecasts and they know where the big boys are drifting to. We had no big boys and only saw a few smaller ones which had run aground in the bay and were slowly melting away. The more north you go, the more you see them and on occasion they can block off the complete harbor of a town. Some towns have a tugboat available to pull the Bergs that want to get into the harbor, back to open waters again and then hope for the current to push them away. And maybe to the next town. 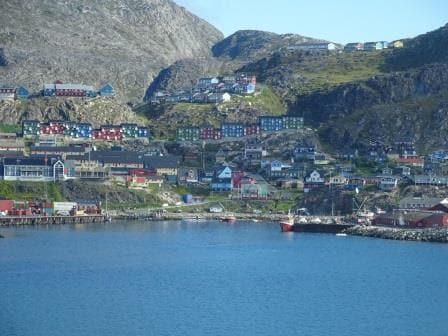 The whole village is built against the mountain range so getting anywhere is good exercise.

We had a beautiful day here, with the ship being in port from 10 am until 18.00 hrs. As is with most villages and towns in Greenland, Qaqortoq is very isolated. There is an air strip but nearly all traffic along the coast is by means of three ferries which run all the way from Qaqortoq up the coast, via Nuuk the capital, to  IIulissat the most northern harbor which can be reached all year around. We cannot do any tours in Qaqortoq as there is nothing outside the town, unless you want to make a 9 hour trek to a sheep farm further inland. A lot of people do this, but this not a ships shore-excursion you can do.

In true Scandinavian style, the houses and apartment buildings are multi colored. The only color I could not find was Orange. (Very disappointing for a Dutchman)

Thus the guests had to make do with the town itself. But that is also the attraction here. Greenland is completely different again than Newfoundland, as the houses are more in the Scandinavian style, there is a strong presence of native culture hence the name Qaqortoq, as the Danish name is: Julianehab.(Which means Juliana harbor).The Inuit name for the town means “White” which refers to the white granite of the mountains and hills.

Qaqortoq is the fourth largest town in Greenland with 3,200 in habitants. Nuuk the capital is the largest with 17,000. I find Sissimut (2nd largest city with 6,000) personally the most fascinating one as it manages to have a Coffee museum which might not be the most northern museum in the world but it is certainly one of the most difficult ones to reach. The Danish and as a result the Greenlanders as well, are great Coffee aficionado’s and thus is there a lot of coffee history, folklore and memorabilia to find everywhere. Enough for a Museum, even for a remote place like this.

We will sail at 18.00 tonight and then tomorrow we are to transit Prince Christian Sund. So we have to wait and see if we make it. There are normally three challenges to overcome: one: very bad weather, two no visibility, or an iceberg blocking the entrance or exit. Holland America had it all through the years, so we find out tomorrow how lucky we are going to be. We are not expecting bad weather so we are already up to 33% of going in.