After leaving yesterday afternoon we saw a few whales and in the distance a few small icebergs. It looked as if they had stranded on the shore. The ice forecast had given a count of 3 icebergs on it and thus we had all the excitement that was predicted. And then the reduced visibility came in again, in all its variations. Large White banks of them interspersed with clear open areas or what came later in the day a sort of sea haze which made it hard to say whether you could see into the distance or not. The bridge took no chances and instigated watches for reduced visibility and thus the Whistle was engaged again and every two minutes we were reminded about the fact that the captain was hard at work.

By lunch time the ship was out of the official ice berg area and now it will be ice free until we come to the Danish coast line. As for the ice, we will see, what and will be generated by icebergs which are calved off tide water glaciers, in the same way as we see in Alaska. As it now high summer and not sailing far enough to the north, we will not see sea-ice.  Also the amount of glaciers calving cannot be predicted. Most – real large- icebergs come from the Disko Bay area up north and are then pushed southwards by the current.  Local ice will come from the Glaciers around Qaqortoq and thus we have to wait until our approach tomorrow morning to see what is really out there. 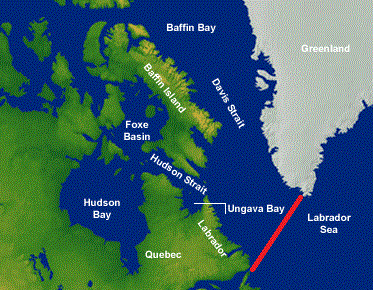 Thus today we had a sea day, crossing the southern part of the Labrador Sea with very little to see due to all this restricted visibility. As it is a long cruise, we have a large number of Lecturers on board ranging from Volcano’s and Ice, to Beavers and Eagles and stories about travelling all around the world. We also have a dance team on board for those who want to spruce up their skills (or show them off………….) and then of course all the regular items which are standard staple of a Holland America Line cruise.

My quest today apart from continuing my ship inspection, to do some refresher training with the crew. We call this First Response Training and it teaches the crew what to do until the real emergency teams arrive. Initial actions have the biggest impact on the eventual control of a situation and is thus of extreme importance. We give these trainings to all groups on board who are in locations where there is a heightened chance of something to happen or where there are larger numbers of crowds around which need support to ensure all remain safe. 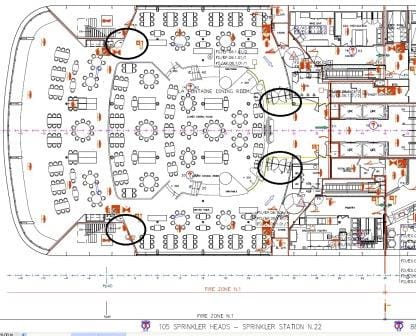 Two exits aft, one regular entrance forward and we can also guide an evacuation through the galley if needed.

For the latter, the dining room is the largest area of concern. The lower level of the Rotterdam dining room has 384 seats and all these people are sitting down, eating, drinking and enjoying themselves, and are hard to move if something would happen. It is not easy to convince a guest there is something going on and they have to move, while have just starting to tuck into their main course. If there would be an evacuation from both dining room levels (due to smoke, collision, water pipe burst on anything else that can happen on a ship) we have about 90 dining room staff available. That looks like a lot but it is not. Each dining room level has 4 emergency escapes and if you thus divide 90 by 8 you have 11 crew per escape for guidance. Then they also need to help Guests with Special Needs and that means the crew has to know exactly what to do and how to do it, to work efficiently.  If we could use all four exits, then on the lower level each exit would accommodate 384/4 = 91 per exit. They do not all fit through the door at the same time and thus the line – Conga Line- will have to be regulated. Plus people with Rollators, scooters wheelchairs, sticks and oxygen trolleys have to get out as well, while at the same time they should not block and delay the flow of the more ambulant guests. And thus we train and exercise.

For the galley we have different issues. There only the kitchen brigade have to evacuate themselves but as the galley is a dangerous area  due to all the cooking and frying, here the accent is more on instant action to control the issue at hand. For that we give refreshers in using extinguishers and rigging hoses, using fire blankets and being familiar with were all the equipment is located. I never find any issue with the knowledge of the crew, what needs sometimes to be emphasized to them is that they can really take action and do not have to wait for a supervisor to give directions.  So this morning we exercised with fire hoses and one of the new Lady Cooks managed to aim the nozzle straight at the Exe Chef and almost got him drenched. Unfortunately I did not have my camera with me. The Exe. Chef who is a company old-timer (started in 1978) and has a good sense of humor and thought it was very funny. “Attempt for promotion by using a fire hose”. (Pronounced with an Austrian Accent)

So tomorrow we are in Qaqortoq from 10 am until 6 pm. It looks that it is going to be a very nice day. No wind and a lot of sunshine. Temperatures 53oF / 12 oC. The town has two super markets and thus I expect large numbers of crew ashore to stock up on personal goodies as they did not have the chance to go shopping in Boston as we had USCG inspection there. And of course we will then find out if Greenland is really green.