When you arrive at Red Bay, you really think, why is this place here? As from the seaside there is nothing but just an outcropping of rocks.  Hardly any trees, just moss and shrubbery so it looks very desolate. Especially as we are arrived on an overcast day. But it did not rain, so it was a good day, or a Grand day as the Irish say, when they have a dry day.  But when you come to the anchorage you start to realize why the whaling ships choose Red Bay as a port of operation and refuge. There is a very nice bay with good shelter tucked away behind the shore line. 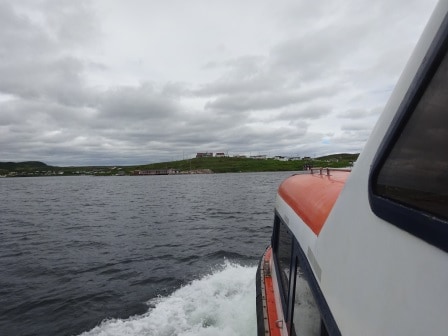 Tender sailing into the bay.

We of course were much too large and are having too much draft to go in there so we had to rely on good weather to make the call. Anchoring in 100 feet deep water and no shelter from the elements, you need a good day to call here. And we were lucky. No more than force 3 in wind and from the right direction not causing too much waves and we were in business. 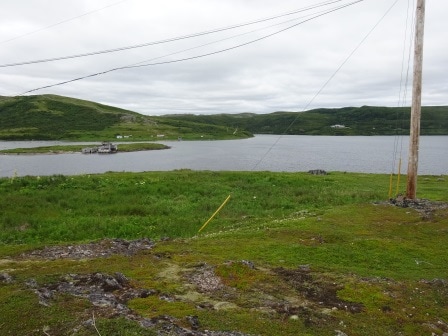 The sheltered bay with the (wooden) ruins still in the middle of the Island.

Red Bay is not a dynamic town for elaborate shopping (it has just one souvenir shop just out of town and another small one tacked onto the harbor restaurant) but if you want to immerse yourself in the whaling history then it is very interesting as it is one of the most unspoilt whaling villages which has survived into the current day. On the island (Saddle Island) in the bay are the ruins of the processing sheds still visible. Right above on the main land overlooking the bay is a nice interpretation centre which explains what is there to see while you can see it through the windows at the same time. 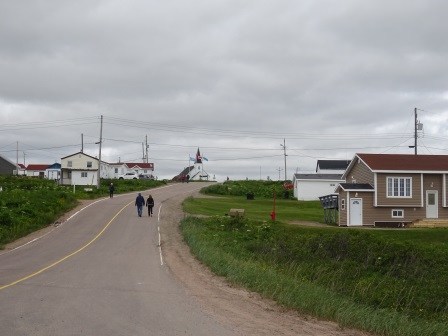 As apropriate, the church is standing on the top of the hill.

Because I could hop ashore my input was required for a medical drill. In the archives you can find examples of the large drills that I conduct on board with 25 or 30 casualties which stretch the capabilities of our medical staff to the limit. But we also do smaller drills, with three or four casualties so the Medical Team can hone their teams skills, do triage and exercise how to cope with a full medical center. 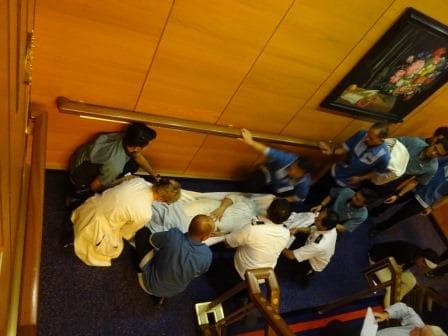 Casualty nbr 3, broken leg and shock, being prepared for transport.

Today we had four crew who acted as casualties; and they simulated having fallen down the stairs together after boatdrill, as one of them one stepped on the strap of the lifejacket. (A very real life scenario and that is why we ask the guests during boat drill not to bring their lifejackets anymore to the drill) The sequence is then; a passerby calls 911, which alerts the front desk who calls medical. The medical officer on Standby (First Call) goes with the first response backpack to the scene. Once they see that it is too much to cope with only one person, they call for back-up by means of a Brightstar announcement. Now a large number of crew is alerted, including the whole medical team, and they all descend on the scene. If they still cannot cope, then we can raise it to another level which brings out all the officers, in deck, engine and hotel and a lot more crew. If needed we can then even ask for practicing medical people among the guests.

Today we stayed with the small alarm and three medical officers had to do the work. While the ships doctor was the assessor.  I was asked to be the 2nd assessor and look at the non medical side of the whole happening. Things went well and it was all followed by an extensive debriefing. Still we always learn something and those details and observations we will then train on during the next drill. The most complicated part is always to make the guests, who are passing by, aware that it is a drill. Nowadays everybody wants to put their photos on Facebook and that is fine but not with the wrong information. So I had to do my P.R thing a few times to inform all who passed by. Even when you train in a remote part of the ship, on a cruise ship there is always somebody around. 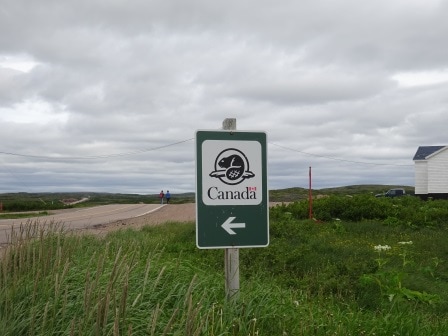 I always thought that Labrador was a part of Canada. But obviously it is not, otherwise why would you have a sign here indicating how to get to Canada ?

At 15.00 hrs. we sailed again, and our next port of call is Qaqortoq at the South West tip of Greenland where we will be the day after tomorrow.  Was it worthwhile to go there, I think  it is the only way (unless you like a very long car ride) to see how these whaling towns looked liked in the days of Moby Dick.

I will leave you with a few photos from Red Bay. 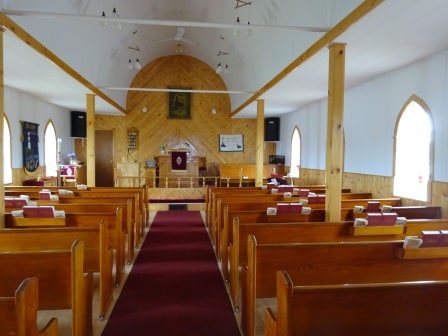 The church was open for visitors and this is what it looked from the inside. 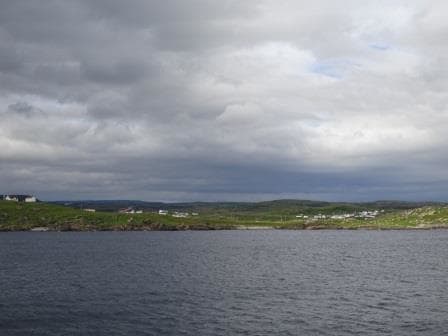 While sailing out. The part on the left is the harbour with the historic Exhibitions, the part to the right is the main town.