After safely surviving the 30 minutes forward, the good ship ms Rotterdam approached Corner Brook.  After leaving Sydney we sailed through Cabot Strait (Mr. Cabot discovered the area for the French) and then into the Eastern Fringe of the St. Lawrence Bay. From there the ship entered a fjord, where deep inside Corner Brook is located. It is not really a fjord the area is called the Bay of Islands and it is also the estuary of the river Humber.

A wide screen of Corner Brook with the ever smoking pulp mill in the foreground. The dock is right behind the plum of smoke. (Courtesy Wikipedia)

Again it started out as a gloomy day but turned very quickly into a sunny but very windy day. This area is very similar to the Inside Passage between Vancouver and Ketchikan. Same Pine tree forests, same industry (lumber related) and some sort of docks. When I saw the dock I thought for a moment that we were arriving in Ketchikan, but it is a lot less commercial in a tourist way of speaking.  The town of Corner Brook is about 10 to 15 minutes away from the dock itself, nicely sheltered between some mountain ridges. Which of course indicates at once that it must be windy and cold here, otherwise the town could have been on the water front. A large pulp and paper mill takes up most of the area near the water line. 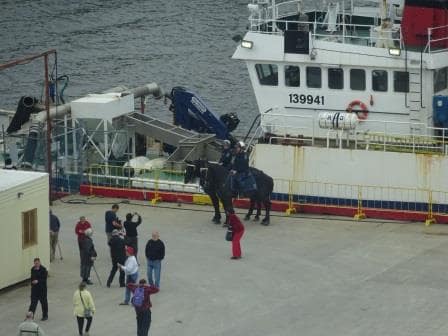 Police like to stand on corners, so they did not come to the gangway.

We were the event of the day for the town, and they had arranged a person who provided music during the going ashore period. Once he was finished, the entertainment was provided by two mounted police officers who were most willing to provide a good photo opportunity with the guests. They can now proudly go home and show their selfie with a police horse from Newfoundland.  I love these sort of gestures as it indicates a town where policing is still “been seen and being present” and does not entail racing around with sirens solving problems everywhere. 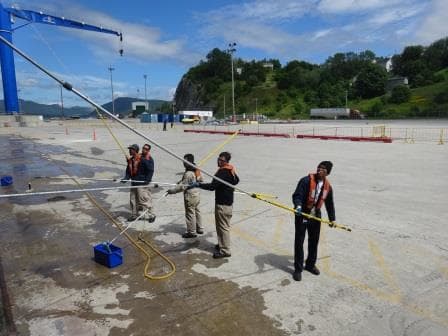 Plenty of Fresh water in Corner Brook, so a good chance to hose down the ship.

The weather turned out sunny and warm but windy. For the Bo ‘sun there was the luck that the wind was from the sea side and thus he could setup his sailors to wash down the hull and then paint the cleaned area. For the painting the staff captain had organized a cherry picker to work high up the hull. From now on it will be some time before the gets the next chance. 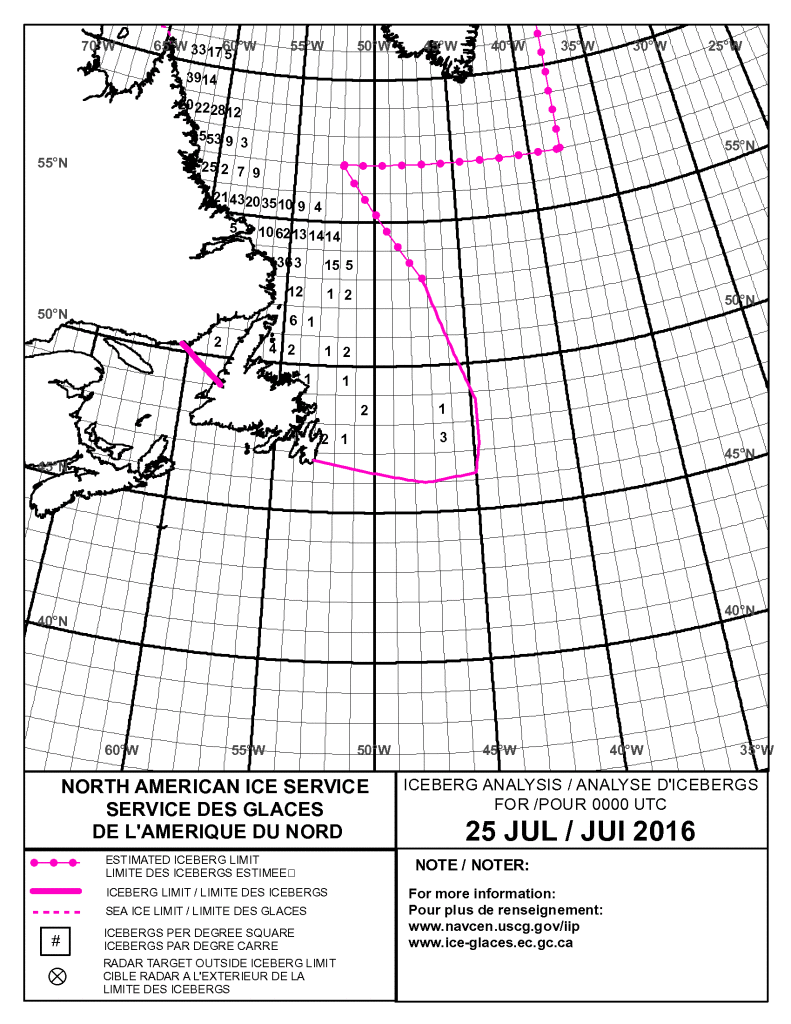 Ice chart of the area for today. Two icebergs have been counted in the bay. (Chart courtesy, Canadian Coastguard)

We are now officially in the ice area but so far nothing has been seen. According to the Ice forecast there are 2 ice bergs that made it into the area and maybe we will see them tomorrow morning. It is not usual for icebergs to block the entrance to Red Bay and sit  where the ships normally anchor but with only two around the chance is very small. But you never know.

Red Bay is a tender port as it is much smaller than Corner Brook. As explained yesterday it went back to obscurity once whaling became less important and thus there was never the need for a large dock. Corner Brook has several as it needs the pulps and paper ships to come alongside on a regular basis. Hence it has a large crane on the docks side for those ships that do not have their own loading gear.

Today we also embarked our Greenland Ice pilots who will be with us until we are passed Prinz Christians Sund. They had to board here as there is no pilot station at any of the small Greenland ports except Nuuk the capital. Then they will stay with us until Reykjavik and either take a ship back the other way or fly back home. There are two of them, as the stretch through the Sund is too long for one pilot. 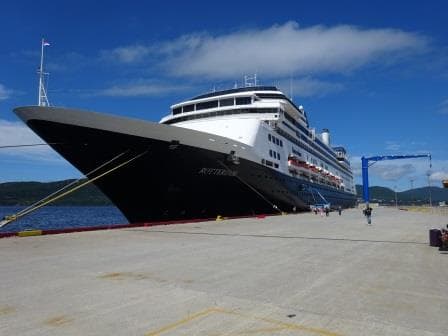 The ms Rotterdam basking in the Corner Brook sun. The blue contraption in the back is the local cargo crane.

While the Bo’ sun enjoyed the sun and the wind from the sea side, the captain was less happy as the strong wind of 20+ knots kept the Rotterdam firmly glued against the dock. Departure and with that I mean, getting off the dock, was going to be a challenge. Luckily by 17.00 hrs. the wind just decreased a touch and with all available horse power on the thrusters the ship could just get off the dock.

Tomorrow we are in Red Bay located in Labrador. Weather forecast calls for mainly overcast skies but dry and not too much wind. We are supposed to drop the anchor around 06.30 and be fully in business by 08.00 hrs.  I think I feel the need to inspect the proficiency of the Tender operation so I might hop ashore for a while.