I was on the bridge by 05.00 to be present while going through the Pentland Firth. This passage is located between the Scottish Mainland and the Orkneys, with Scapa Flow just being to the North of it. As it is a fairly narrow passage, the flood and ebb is really pushed through it at great velocity. There is a note in the chart saying that in one particular island passage the current can reach a momentum of up to 16 knots. That means that if your ships speed is 16 knots, which is not unusual for tankers going through, then the ship is basically standing still until the currents gets less. With the current against you, you loose speed and that might make you arrive late. That does not work for a cruise ship with tours leaving shortly after arrival and thus you have to plan for it. In our case the current was going to be with us anyway and that only helped with being early. The issue that made me be present on the bridge was that the current pushed the ship off the intended track even while it was a following current. You normally correct for this but then the ship is lined up in a different direction than it is moving over the ground in reality. The “aspect” of the ship is different in relation to the real movement over the ground as we call it. That means that when looking at a ship you might think, it is heading in a certain direction, so it will go clear of me. The angle shows the ship heading away, showing the right aspect but the current is setting that ship right into your direction. If you have two ships under different angles and under current influence and you could end up having a collision.

Hence my presence on the bridge, but all was quiet except for a few fishing boats who were going in the same direction and were thus exposed to the same current. So they were being set of the course in the same way as we were. We came through about two hours after high water and the maximum current that we noticed was 7 knots. That meant that for today the max. current was probably going to be around 9 knots an hour after our passing. Still considerable. If you were in a canoe, you would not be able to paddle against it. 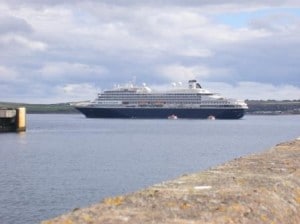 The Prinsendam at Scrabster roads.

So with a nice push from the current in the back, we arrived timely at Scrabster pilot station and this time the weather was nice. Just a very little breeze from the West and no rain in sight. I had secretly hoped that I might have been able to dock but it was not to be. The tide (dictating the depth alongside the dock) was such that the Prinsendam would be sticking out from the pier by about 35 meters and I could not set any head lines as there was a ferry coming in around lunch time. There might be a chance that the ferry service will be reduced to two calls a day, one in the morning and one in the evening next year, and then I can do it. Weather depending of course. The Prinsendam would be the biggest ship ever to dock in Scrabster and both the port and I would like to set that record. Thus we had to anchor about a 2,000 feet from the port entrance and shuttle our guests ashore with the tenders. As the water was flat calm there was really not any hardship involved with doing that. 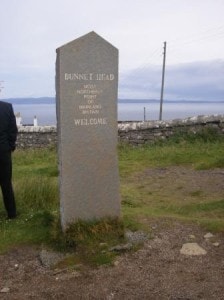 One of the ships tours went to the most Northern point of Scotland. Across the Pentland Firth, the Orkneys are clearly visible.

This was then the real maiden call of the Prinsendam. Last year I had to abort as the wind suddenly turned north and breezed up to wind force 8 by the time I had the ship safely back to open water again. Not today, it was nice and it remained nice, with just a wee…… bit of rain half an hour before departure. 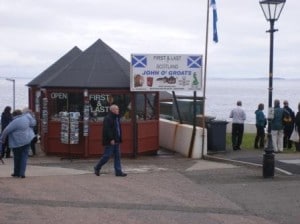 Another point of interest John O’Groats. Named after a Dutchman called Jan de Groot who in 1496 established a ferry service there.

Throughout the day the feedback of the guests was very positive. The tours were good but just walking about during a very pleasant Scottish summers day was much appreciated as well. The Dining room manager reported that a lot of guests stayed away for the whole day and that is not something we can say of each port. So definitely a winner. We will be back again in four weeks during our around England cruise but it will be good to return here in general. If the weather gods are with us of course.

While the last tours came back, the junior Pipe and Drum band came out, to play for our returning guests. I love bagpipe music but I was glad that I was standing on the bridge 2,000 feet, as they could be clearly heard all the way over the water. Nice music, very well played and with a lot of enthusiasm which was clearly noticeable in the number of decibels produced.

Tonight we will start crossing part of the North Atlantic and we will notice a low ocean swell rolling in that will make the ship pitch a little bit. Then tomorrow we are in Runavik in the Faroer islands. Another maiden call for the ship and we are looking at good weather as well.