With a 05.00 pilot time, I poked my nose through the bridge door at 4 am and saw that the weather looked very good. As the Firth of Forth basically runs West to East, it can be a big blow hole that funnels the wind up to a high Beaufort rate, which makes it a very unpleasant place. In the archives you can find a blog describing the cancellation of Leith due to wind force 11 in September 2009 and with those winds the Firth is not a good place to be. However today looked good and we happily progressed towards the pilot station. Edinburgh does not have a port itself but there are three options: Leith to the East where you dock, South Queensferry in the middle where you have to anchor and Rosyth to the West where you dock as well. We were destined for Rosyth, West of the bridges. Leith is closer to town but it is tide dependent, as you need high water to get over the bar in front of the locks. Rosyth is an all day port; the only hurdle is the clearance under the bridges when going there. It means that you can arrive and leave whenever the cruise schedule says it is best, instead of arriving at an awkward time and having to leave at an even more in-convenient time, dictated by the tides. Nothing of that today we went straight for the dock.

We were not the only ship at the dock and as I also wanted to dock portside alongside, nose out, I had to swing in close quarters and then go sideways to the pier. Not difficult but time consuming as there was not much water under the keel and then you really have to push the water aside. Normally when there is not too much water, you try to wedge the water away but that means going forward along the dock and then backing up while in line with the pier. With a ship already docked there, that was not possible this time. So I had to go the slow way. When we were finally in position and were just ringing finished with engines, the man in charge ashore had a brain wave and suddenly remembered that there was another ship coming in, which was scheduled to dock in between. So I had to move 75 feet astern. Engine back on line again for thruster power, gangway hooked out again, shifting the ropes to one bollard more aft and then slide the ship along the berth to the new position. It made me late instead of being ahead of time. Later in the morning a little coaster came in carrying wings for windmills. Rosyth is a storage point for windmills and from here the components are transported to open sea for installation. 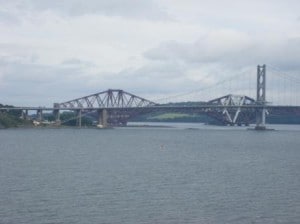 The Forth bridges from the Rosyth side. The front one is the new car bridge, the one behind the old train bridge. The white stuff around the pillars is scaffolding as the bridge is currently being repainted. An estimated 10 year project.

Rosyth’s claim to fame is being a navy dockyard and here the new aircraft carriers for the Royal British Navy are assembled. The hulls come in modules from various places and are assembled here as a sort of giant jigsaw. We saw one of the aircraft carriers currently in service being refurbished but from the new ships there was still little to see. Sailing down the Firth is quite scenic. First going under the bridges, then passing South Queensferry with the Crown Princess at anchor and then Edinburgh on the Southside with various villages and hamlets on the North side. Also the centre of the Firth has several islands which are full of ruins from old military establishments. 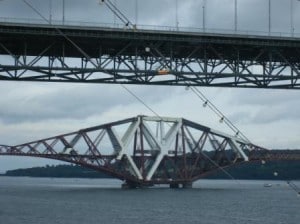 As long as you are under the mark, you are in good shape.

For this departure I lowered the radar mast, to increase our clearance height by 6 meters. We left just at the start of the ebb and that meant that the water was still quite high under the bridges. Not a problem if you go straight under the centre, but if the current sets you over and away from the centre line, it might be. So a bit of spare clearance is never a bad thing to have. 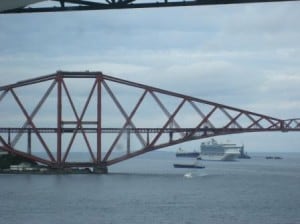 The Forth railway bridge, with just behind it the Crown Princess at the Queensferry anchorage. Note the tugboat at the stern. Compulsory to ensure that the ship does not hit anything when it swings around on the tide. There is a pilot on the bridge all day long, to direct the tugboat to take appropriate action when needed.

As soon as the pilot was off, I cranked the ship up to full sea speed as it is a high speed run to Scrabster our next port of call. We should have the current with us when we go through the Pentland Firth but the currents there do not run on the exact schedule, so I do no want to rely on it too much. The weather for Scrabster looks very good so we should have a good day there.

Note: I mentioned in my Tilbury blog the visit of the Ocean Liner Society. One of its members, “Captain Martini” has just posted the photos that he took during the visit. Enjoy. 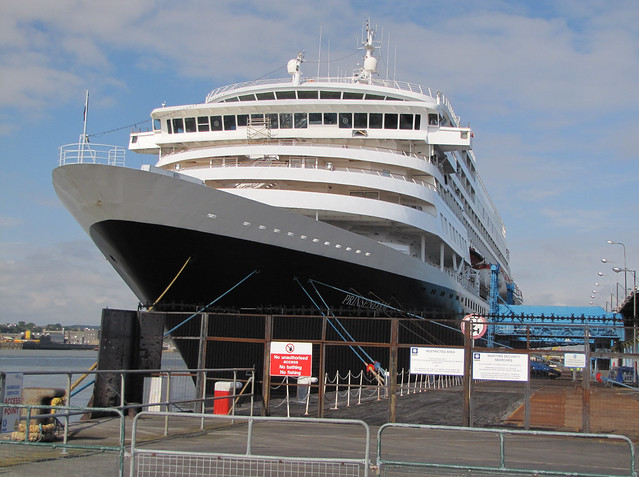