This was a maiden call for the Prinsendam and subsequently for Holland America. The normal call is at Torshavn but that was out of the question today. It was a national holiday and that is celebrated with a sailing regatta and other water fun. So the whole port was reserved for them. Hence the “Albatros” and the “Mein Schiff”, calling at Torshavn, had to anchor and ferry their guests ashore. Runavik is located ”one fjord north” of Torshavn, in a fairly sheltered bay. It has a small dock and that meant we were sticking out about 50 meters on each side but it has good fendering so you can really pull the ship tightly alongside. Strong bollards are located on the mainland and they keep the ship very well in position. All reasons for me to be happy. The only confusing bit was how to find the pilot. Pilotage is not compulsory in Runavik but if you have never been there, it is better to have one for the first time to find out about the local way of doing things. Also in the age of the cell phone, the pilot can talk to all the locals on the dock assigned to pull the mooring ropes ashore and that reduces delays. As pilotage is therefore a bit of a voluntary affair, we found several different locations in our nautical paperwork of where the pilot boarding area was supposedly located. . When we called the pilot on the VHF, he gave yet another location. It turned out that it depends a bit how early the pilot boat makes its way out to the ship. Where the meeting point of the day is, is where the pilot station is located. Near the entrance of the bay was only one (fishing) boat floating around so that should then be the pilot and it was. With that issue out of the way, we happily progressed to the dock. 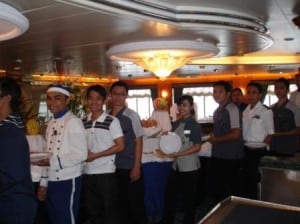 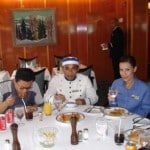 Today we had something special going on again. While the guests were discovering Runavik and surrounding area, the ship hosted a luncheon for our newest crewmembers. It is Holland America policy to invite the new, new (new to the ship and new to the company) crewmembers to a luncheon/ get together so they really feel that they are becoming part of the team. With a smaller crew such as the Prinsendam has, it may take a while before we have enough new, new crew together to arrange a luncheon. The group of 18 crew of today were those who had joined the company in the last two months.

The whole happening is organized by the Human Resources Manager, who is a sort of party planner, crew confidant and mother hen rolled into one. The luncheon is normally attended by the ships staff and after a few wise words from the captain a buffet is opened for everybody to enjoy. The great advantage is that most crew starts climbing the totem pole from the bottom and now they can find out that the ships staff are normal human beings as well and do not live in an ivory tower. That understanding breaks the ice a little bit and gives them all the feeling that we are a “Club Prinsendam” that works and lives together.

For departure I had something special in mind, namely to go sightseeing through the islands. The sun was peeping out during the day and that burned away all the haziness we encountered during the morning arrival. Sailing between the islands is something special as there are strong currents everywhere. There is hardly any difference between high and low water, as there are no estuaries that act as pockets that “collect the water” and causes it to rise and fall. Now the water races straight through, through the passage between two islands into the North Atlantic Ocean again. As the passages are quite narrow, most of them less than a mile wide, the velocity can be considerable. As our departure was in the middle of half tide, the current was at its worst. Hence I did not dare to take the narrowest of all as it involved a sharp turn through an opening of twice the ships length with about 8 knots of current on the beam. However the best one available was just under a mile wide, and as spectacular for its scenery. Stark cliffs and green lush mountain sides made for an unforgettable experience. Still the current give us nearly 7 knots of extra speed, while going through. 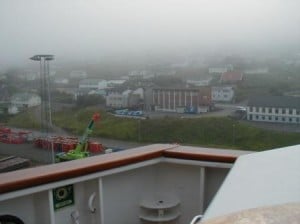 The town of Runavik seen through the early morning fog.

Runavik, is not the most wildest of places as far as city live goes, but the nature is impressive and 804 guests were part of a HAL maiden voyage call. We did not have any official presentations, as anybody who was somebody was partying in Torshavn.
Tomorrow we will have a sea day while we sail westwards towards Reykjavik.