The good ship Koningsdam is weaving its way southbound again back to Amsterdam after a 14 day “flat circle” cruise curving around Scotland to Iceland and then back via Norway.  Today the word “weaving” is correct as we are on far from a straight course. Going between the various Oil Rigs you can easily do on a safe and straight course but what you meet on the way can make a difference. Between the Oil Rigs you can come across Fishermen as they are convinced that fish will hide as close to a rig as is possible and you also come across watch ships which are there to protect the oil rigs. Fishermen will claim that we are going where they need to be, that the uncomprehending outside world build Oil Rigs, windmill parks and other structures on their exclusive fishing grounds and that the rest of the floating world (including us) is just a nuisance in principle. They are not always wrong nor are they always right but the rules which cause these structures to be there come out of a democratic consulting system where every stakeholder had the chance to give input somewhere during the decision process. And the final decision making policies resulted in what we have now.

The space between oil rigs is free to everybody as long as you do not endanger the rigs or its working capacity. And this means that fishermen are in between. Nothing against that, probably very good fishing, but when they move towards you from out of the rig area and they are still fishing then the navigational situation can become a bit complicated. We have the Rules of the Road which clearly define how to deal with fishing boats when fishing. However the rules have no allowances for: if a whole slew of oil rigs make it impossible to change course. What do you do then? Such a situation is then covered under a general rule, stop the ship or at least slow down. And slowing down if you really do not have to is some- thing we try to avoid as it costs time and fuel. So we always hope that the fisherman recognizes its own and the others situation timely, so a small action from one or both sides can prevent a major course or speed change. 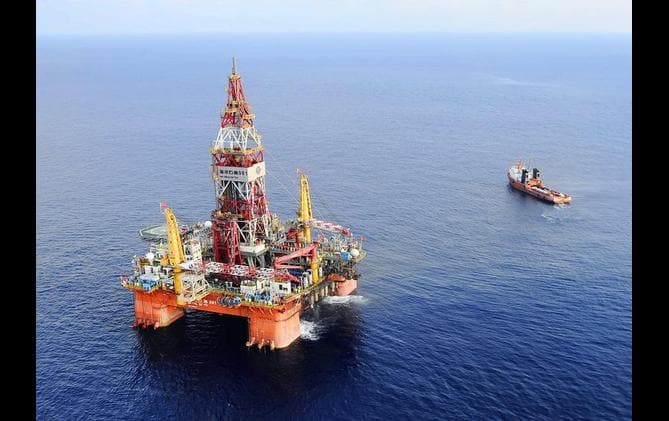 A Supply boat keeps watch over an oil rig. In this case a drilling platform, making a new well. (Photo Courtesy, somewhere off the Internet)

Then there are the watch ships around the oil rigs. A number of years ago it was decided to put watch ships on station near the oil rigs after a calamity during which a cargo ship ploughed into a Rig. And thus we see everywhere converted Fisherman Trawlers, Supply Vessels or other craft sitting a short distance from a rig with the duty to call & challenge anybody who comes too close; and if it is because of a power failure to tow the vessel to safety and away from the oil rig. Many an ignorant sailing boat has had the scare of its life when suddenly one of these station ships bore down on them. We have normally little dealing with them as they know we stick to the steamer tracks but sometimes we get a call with the advice about something or the other which might be going on or near our route.

Today we had something like this, where an Oceanic Survey Vessel (most likely looking for more oil) asked us to give it a wide berth. A wide berth of several miles around itself. It was accompanied by 4 watch ships sitting in quadrant around the ship and moving in formation, while going very slow. Sometimes they ask for a wide berth because they are towing a sonar probe but often it is that coming closer will affect the readings they are taking. We always try to comply but going 3 to 4 miles out of the way might bring you close to an oil rig and that upsets the watch ships again. Today the Navigation Team could solve the issue by veering off the course and by crossing at a large distance in front of this little convoy.

Tomorrow we will be back in our home port Amsterdam and getting ready for the next cruise. The weather will be a bit uncertain; warm 75oF /24oC but with a chance of showers and drizzle in the early morning and maybe during the day.

I will be going home as my time on the Koningsdam has come to an end. Now I will have a short leave and then will return to sea for the next series of ship visits.  I will keep my plans updated on: http://www.hollandamerica.com/blog/my-sailing-schedule/

As it is never certain where I will end up next. If nothing changes my next ship will be the Veendam starting on 15 October.  Thank you for reading my blog and I will continue with updating my history part of the blog. I managed a number of captain’s bio’s last time and that will now continue.