In Norway people say, “There is Norway and then There is Bergen”. As the people from Bergen seem to consider themselves sort of outside Norway or think that Norway is part of Bergen and not the other way around. The real deep meaning behind it was once explained to be by a Norwegian in a pub in Amsterdam and after several beers it made great sense but the next morning it was hard to remember the exact context. So I cannot explain why Bergen is different it just seems to be so. But I wonder if the weather in Bergen is also different than the rest of Norway. And with that I mean, the way it rains here. 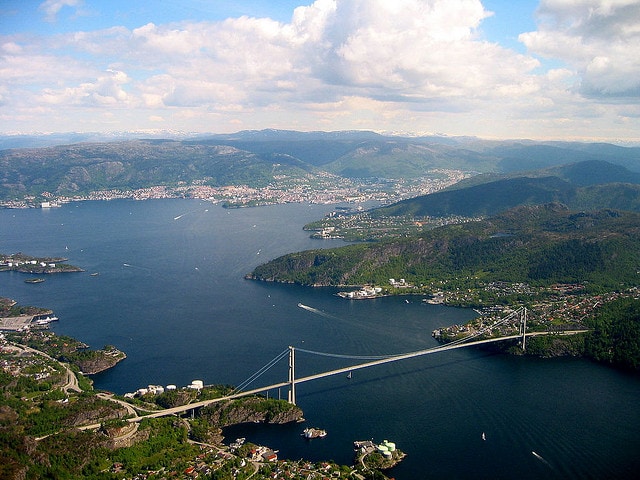 Bergen is nestled nicely in a protective valley but rain clouds get caught in the Horse shoe shape. The bridge in the photo is high enough for all ships to pass under. But around the corner to the right is an older and much lower bridge. (Courtesy of Favi Images on Flickr)

It rains of course everywhere in Norway but Bergen sits in a valley surrounded on three sides by mountains. When the rain clouds roll in from the sea and bounce against the mountain ridge on the East side, there is a fair chance that it will rain here. But this morning I seem to observe that the clouds bounced from one side of the town & mountain ridge to the other side and it just kept raining. The cloud swirl looked very peculiar when seen from the ship. It moved towards the East and then it moved towards the North. It kept raining for most of the day with intermittent spells (I think the clouds were on their way to bounce to the other side) of dryness. We had the Aida Luna in as well and thus approx. 6000 guests had to enjoy a rainy day in Bergen. Luckily the town has a lot of offer even on a rainy day and thus “the damage done was limited”.

We were docked at the smallest dock in the town, the Bontelabo dock which I mentioned last time as well. The AidaLuna was at the other dock which is longer and also closer to town. Bergen’s port management does what most ports do: assign the best dock to the most frequent caller. If there is no seniority issue then the dock normally goes to the largest ship (in guest capacity) and if there is no difference there then it is normally the ship that stays the longest in port. We have a regular call today from 08.00 hrs. in the morning to 17.00 hrs. and thus there is nothing for Bergen Port to consider us special and hence we were at the smallest dock. 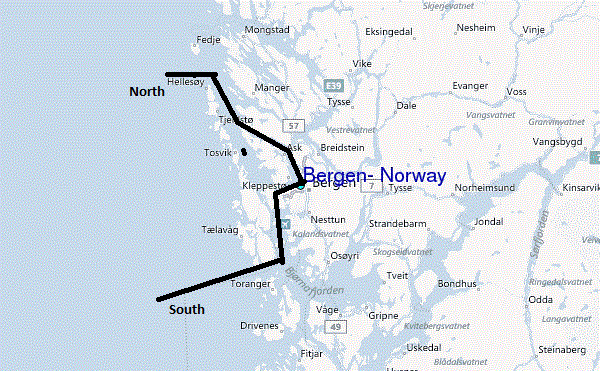 As most Norwegian towns Bergen is tucked away in a Fjord which means sailing in for a considerable difference.

Bergen has two major ways of getting in and getting out. A north Entrance/Exit and a South Entrance/Exit. Smaller ships such as the Prinsendam can use both routes. Both routes require going under a bridge and the bridge of the southern route is lower and that blocks the Koningsdam from going this way. We are coming from Aalesund to the North so coming in from the north makes sense. Our final port is Amsterdam, down south and thus the Bergen south entrance would make more sense. But because of this bridge we have to go north again to open waters and then sail south. A deviation of a few hours and nothing we can do about it. Even lowering the Radar mast or flipping over the funnel as some ships can do would not make a difference in this case. We are looking at a considerable height difference here. A pity but the Koningsdam will have to make the extra miles. 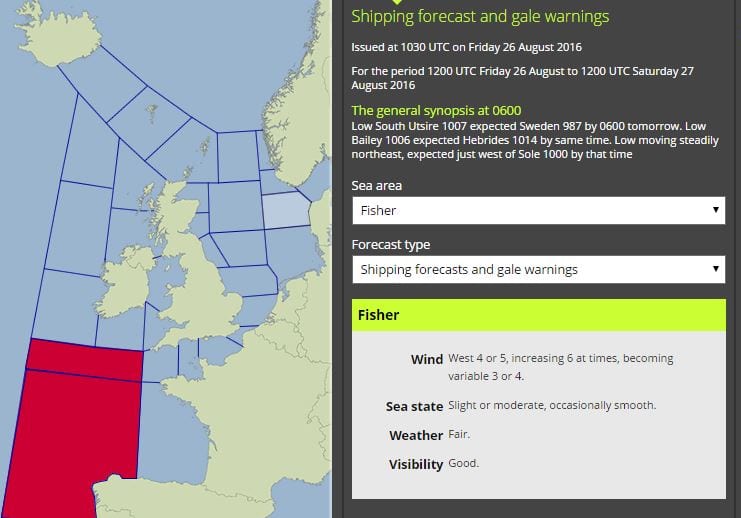 We will be in the light blue area tomorrow morning. the nasty stuff is all the way to the south.

After departure we will sail North West again until we are back in open sea. That should take us about 2 hours counted from departure. And then it is due south until we will come to Amsterdam pilot station on Sunday morning. When going south the issue of low visibility will pop up again. Thus far there seems to be very little chance. The Shipping forecast indicates a moderate breeze off the Danish coast and good visibility. At the moment it is better to be here than West of the Gulf of Biscay as there is a nice storm blowing of the Portuguese Coast. Our guests have one more day to enjoy on the ship and then most of them will go home, unless they are adding the seven day Norway cruise to this cruise, making it a three week cruise in total.