Well, I have some catching up to do to finish my blog properly before going home. Yesterday I could only manage a one liner as I spent most of the night and the day and the following night on the bridge. On the 27th we called at Ketchikan and it was the proverbial silence before the storm. Coming down from Glacier Bay, the forecast was already getting gloomier and gloomier but a quick calculation showed that we could call at Ketchikan without any issues. The problem was only starting in the night of the 27th and the day of the 28th. Getting back to Vancouver on time was the challenge. So while the ship was happily docked on a dry Ketchikan day (a good reason to be happy) I worked out a plan how to have the least impact of the coming weather.

There are several ways to get to Vancouver from Ketchikan. Outside via the open ocean and around Vancouver Island and then there are three routes through the Inside Passage. Number one is through Queen Charlotte Sound and Johnstone Strait and this is the one we normally use as it guarantees that the ship can always make the tide at Seymour Narrows. Number two goes partially inside and that means more miles and a longer sailing time. Number three goes all the way inside and is very scenic if you have nice weather but only works if you have extra time in the schedule and a perfect time for the Narrows. E.G the slack tide has to fit in the sailing plan to maintain an average speed all the way. As Mother Nature seldom works in synch with the cruise brochure, we can exercise that option very seldom.

So this time I decided to go for it. For two reasons, Seymour Narrows tide was very small (no more than 3 knots) during the night of the 28th, so we had a wide window for going through and I wanted to be inside as much as possible as with the other options we still had to go into the open ocean a few times. It meant asking for Canadian Pilots to come to the pilot station close to Ketchikan, so I called at Triple Island instead of Pine Island north of Vancouver Island. B.C Pilots were able to co-operate as long as I came 2 hours later than I really wanted to but this was due to their rest requirements between jobs. A quick re calculation showed that I could still do this without being late in Vancouver, so there we went. 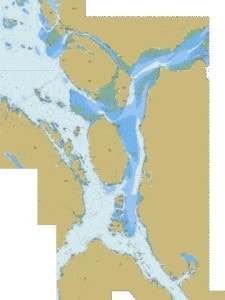 Grenville channel is all the way sheltered. See the narrow dark blue line in the brown. All the white area’s are sea that is more or less exposed to the elements by having vast expanses where the wind can freely blow and whip up the waves. With the guests properly informed we sailed towards Triple Island just south of the Alaskan border. Bad weather consists of two parts, the wind and the swell. When in port wind is a problem, but not so much at sea. As long as you keep the doors to the outside decks closed there is very little danger and inconvenience to the guests. In open sea the swell is the issue as it can make the ship buck around like a young colt and that can and will cause accidents and also sometimes damage to the ship.

My focus was on avoiding that swell as much as possible, by avoiding the long running swells coming in from the ocean. So I hugged the shore line of East Dixon Entrance and we kept the swell down to about 12 feet. No issues for the ship, but the wind kept coming up and coming up, 40 knots predicted 60 knots we got. That meant complications for the pilot boat for coming out in the open, so we were directed inside. No problem for me to do, but it costs time. As a result the pilots boarded – safely- an hour later than planned. I could still make Vancouver on time but now I had lost my margin of erring on the safe side.

With the Canadian pilot on the bridge we raced through the night, through windy rainy and misty weather. What I call: The dark days before Christmas. We went through Grenville Channel which is very scenic if you can see it. We saw the mountain ranges on the sides which kept the wind away but there was not much scenery to show. Just rain.

By 1400 hrs. we came past Bella Bella. An Indian Village similar to Alert Bay but bigger and with less Totem Poles. But at least the guests had something to look at. I had announced it, and much to my amazement I received an email from the Guest Relations Manager saying that we had two guests on board from Bella Bella. They were going to phone their friends to come out and wave and could I blow the whistle when I saw them.

Well I am always in favor of honking the horn and thus we did. The friends were standing on the old ferry dock at Bella Bella, waving a big red flag. We blew the whistle and we had another few happy people in the world.

Then at 4 pm the test came if my weather forecast/swell chart reading had been correct. There is a short stretch of open water near the Lighthouse of Egg Island where we briefly are exposed to the Ocean waves rolling in through the lower half of Queen Charlotte Sound. Per forecast, the waves were to be between 12 and 14 feet and if so it would mean that I could keep up the speed without starting to slam into them. That was now becoming crucial as the constant strong wind, kept slowing the average speed down and thus endangering a timely arrival in Vancouver.

It worked out well, although the storm had enhanced the adverse current, which costs us speed, but the ship did not slam and by 18.45 we were happily and safely back inside again. Now the race was on for a timely arrival in Vancouver. It was very quiet in the Inside Passage, very few barges, nobody wanted to go outside in the open with this weather, and of course no Cruise ships, as we were closing out the season.

By 01.30 on the morning of the 29th we were through the Narrows and I was looking at a thirty minute delay in arrival. More or less the same as what happens during other late tide transitions. So we cranked the ship up again and I could finally go to bed for a few hours, before the Vancouver arrival. With all the standby’s, training my relief, closing out my sailing period, dealing with an audit and frequently checking the weather forecasts, there had not been much sleep.

By 06.00 I was called to the bridge again, only to find out that we had lost another 30 minutes. It was blowing 40 knots in the Inside Passage. That costs about a 1.5 knots an hour and we had been there for 5 hours. In end the good ship Statendam docked an hour late at Canada Place. Not ideal, but the guests did not notice much of the bad weather and could enjoy their last day at sea without having to endure a roller coaster ride. And I did not have any injuries or other accidents to deal with. If I had taken the normal route, the heavy swells would have slowed me down much more and we would have been much later. Most likely we would have missed the 3rd tide. Waiting for the 3rd tide would have meant a very painful arrival time. The only unhappy man on board will be my chief engineer as I used much more fuel than he likes as I had to put more engines on line to keep the speed and cover the extra distance. But one unhappy camper out of 1,800 is not so much.

That brings us to the end of my last blog about Captain Albert’s adventures on the high seas. As posted before I am scheduled to take an extended leave and will be off the ship until 16 March 2014. As I am NOT planning to blog about the exiting life in an English Supermarket it will be a bit quieter. With the extra days available I will be uploading a lot of Holland America historical material and items about the old captains. I have received a lot of information from readers and family’s and that will go on line now.

Time to thank all of you for keeping up with my daily ramblings and if I was able to throw in the occasional pearl of wisdom, then I have achieved my goal.

It is too early to say Merry Christmas but may you have smooth seas and following winds, those things that have been eluding me for the past 14 days. Best regards to all.

Oh, and by the way, according to the auditors of the yearly Carnival Corp. safety and compliance audit, TEAM Statendam scored within the top 5 of all the 110 Carnival ships out there. They can be very proud of themselves.