Glacier Bay is just around the corner from Skagway. As a matter of fact it is on the other side of the mountain range. A mountain range with an ice field on top. So to get to Glacier Bay we have to sail around it. Hence during the night we sailed down a very windy Lynn Canal again, turned west into Icy Strait and then to the north into Glacier Bay. The Norwegian Pearl was scheduled to be ahead of us with a Ranger pickup at 07.00 hrs. and we followed with 07.10 hrs. That made life for the pilot and the navigators easy. Stay 10 minutes behind the Pearl, monitor their speed and let them do the work. On a night like this it really does not matter but when there are lots of fishing boats it is always handy to have somebody ahead of you, trailblazing a path and then just follow them at your convenience. 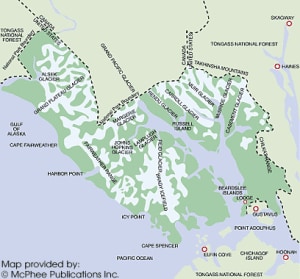 Glacier Bay with Gustavus, courtesy of an unkown poster on the Internet. Originally by McPhee Publications.

With the Pearl going in earlier, she was also coming out earlier and that meant that the Statendam was the ship that closed out the season of Glacier Bay. Tomorrow the Ranger Station will go down to the bare minimum of staffing. Only those who are part of the administration staff, the leaders who prepare for the next season and the law enforcement part of the park will remain. All the others will disperse to most likely, warmer destinations. The staff that remains live mostly in Gustavus a town just south of the Ranger Station in Bartlett Cove. It has its own airport and hence there are all year around good connections with the outside world.

When we sailed up the Bay we had the strange situation that there was a low hanging cloud formation, with the sun shining behind it. It lit up the mountains quite nicely and it turned the slopes into a golden color as the leaves are starting to change. It looked like a color photo with a white pillow on the top. Very nice to look at.
The wildlife showed itself from its good side as well. Mother Nature pulled out all the stops and during the day we had: breeching whales, mountain goats, fish otters, one orca, stellar sea lions, and six bears. With the added bonus that everybody could see them as the bears were mainly on the beach, near the shore line and not half hidden in the shrubbery.
As is normal for the end of the season there was very little ice floating around, the water is still relatively warm and that means that the icebergs turn into slush very quickly and then melt away. Great for us as it meant that I could keep up the speed all the way to Marjorie Glacier and that meant more viewing time. The Norwegian Pearl was only going to visit John Hopkins Glacier and that made me go to Marjorie first. If I can avoid sitting with another ship in front of the same glacier then I will certainly do so.

Marjorie glacier was also in a good mood and dropped two enormous calving’s during our stay. Each one heavy enough for the ship to gently move on the pressure wave and that while the ship was 2,000 feet from the Glacier. The Statendam weighs about 22,000 tons and that gives you an impression how much weight comes down from the glacier face during a good calving.

After an hour at the glacier we raced away as I had just enough time left to poke our nose into John Hopkins inlet. Here we go for the long range view. John Hopkins glacier is so massive that if you go very close you lose all perspective. Unless you are going to stay in that bay all day, it is better to see if from a distance as it really shows Glacier Bay in all its majestic glory.

By 4 pm. it was time to say goodbye to the Rangers and no doubt we will see some of them again next season. Rangers do rotate but the more senior ones have settled down in the area and they come back to the ship each year. We will be back in May next year. Tonight we are heading towards Ketchikan for our call tomorrow, and I am worrying about the weather again. The next storm is on its way and supposed to hit us on Saturday.