Today there were only two ships in Skagway. Us and the Norwegian Pearl. A sure sign that the season is ending. Because we were only two, we were both docked at the Rail Road Dock as this is the best dock for being out of the wind. Also on this dock the trains can stop right in front of the gangway. This is always nice as some of our guests are not in the long distance running group anymore. The weather forecast had been a mixed bag but after a gloomy arrival, it turned into a dry but very chilly day. Winter is definitely on the way. 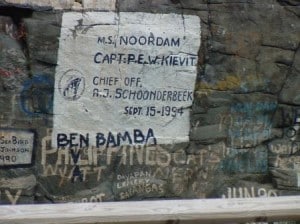 Due to our regular berth being the Broadway Pier, I can only dock at the Rail Road dock when there are no other ships around. That means in the early beginning of the season and at the very end of the season. Today we were at the Railroad dock forward and that means that I can verify the date that I came to Skagway for the first time in my life. 15 September 1994 on the Noordam with Capt. Kievit in command. We were not supposed to be there but the weather in Sitka was too bad for our tender call and Skagway was a nice option to give the guests an alternative.

Note: Ben Bamba was a plumber on board the noordam, who managed to get hold of the paint roller when the bo’sun was done.

I had heard about the sailors art on the rocks near the rail road pier and I was all excited to see it, as there were paintings there from the 1950’s and even a vague one from 1926. The old Hal ships, Prinsendam and Veendam were immortalized as well so for somebody with an historical inkling like me, this was exiting. When we were docked, I saw an open spot on the cliffs and I thought well, why not me there for posterity as well. The captain was all in favor and so the bo’sun and two sailors spent the day getting the names and the company logo onto the rock. My last name caused all sorts of problems due to its length but in the end it fitted.

Every year, when I am in Alaska, I hope that at least once a season I can dock at the forward end of the rail road dock to see if the Noordam entry is still there. And it is. The practice is still going on, and if not officially allowed, it is condoned by the authorities as it is a nice tradition. So also the newer ships get the chance. The people on the rail road dock are keeping a half eye on it and some time ago a staff captain was called to order, when his crew started to paint over an existing sign. That is NOT done of course when ego overtakes the historical context and that goes a bit too far.

A few years ago they rebuilt the Rail road dock, and now you cannot walk up to it anymore with a ladder to paint a sign. You need a cherry picker to do it. That stops me from adding a Statendam sign to it as the tradition is nice but I am not going to spend a $ 1000,– on it, just for the sake of it. So unless I can get another arrangement organized, my Noordam entry will be the last one.

It is always a bit sad to be the last ship of the season and also this time it gave a bit of a gloomy sort of feeling. On one hand we are happy to leave with the bad weather and all the other things that an Alaskan winter makes it un-attractive for sailors to be there, on the other hand you are leaving behind all the people you worked with over the summer. We were the last ship leaving from Skagway as well and the locals came out to say goodbye. A little group of ladies came onto the dock to sing a farewell. When they were done, they were then all shoe-ed away from the dock by somebody citing security concerns. The world is really changing, if a little choir and all the locals, known by name and face to those who work on the dock (most of them will be family anyway), cannot say farewell anymore. I am glad that I also sailed to Alaska when things were much simpler. 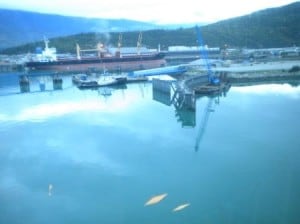 Another sign that the season is over. Cargo ships are taking over the piers. Here a bulk carrier loading coal at the Ore dock. Although is officially a cargo dock, all summer it is in use as a cruise ship terminal so four ships can come in on the same day.

Tomorrow we will be in Glacier Bay and once again we will be the last ship leaving Glacier Bay. For the remainder of the winter Nature will do its thing unobserved and un-photographed. I am wondering what surprises she will have in store for us when we return next year.