And then it got more bumpy than expected. Cape Hatteras is a sort of depression producing factory in the winter time so about every three days it presents a new creation. It is quite far to the North from where we are and normally those creations go straight across the North Atlantic to Europe and the southern part of the North America does not notice it much. On occasion however the path of a new depression, while going east, follows a bit of a curved route with the curve to the south and then it affects the area above and over the Bahamas. 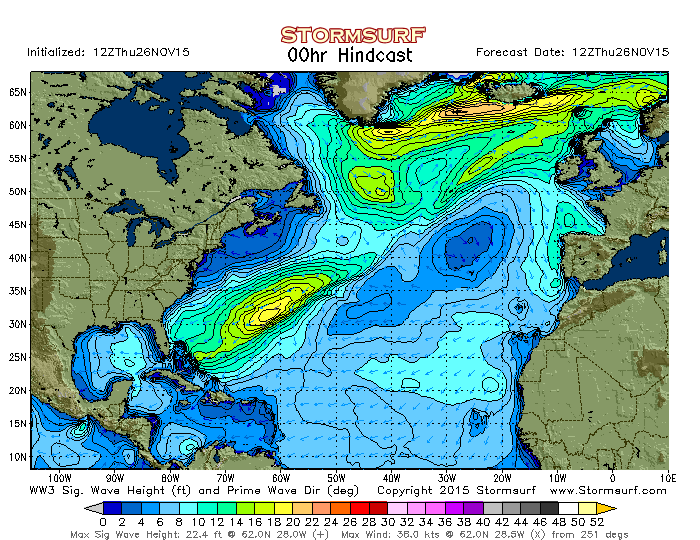 Today we were enjoying that “curved path”. A long running swell came in from the North West and then slowly shifted direction to the North East as the depression was moving along.  In the early morning the waves started to build up slowly from 10 to 14 feet with the occasional extra height of 18 feet.  As swell keeps building up on the passing wind we will keep them until we arrive in Half Moon Cay.  We are now right in the middle of the wave field and the ship is moving quite a bit. The problem is it is not a regular rolling pattern with a regular sway but, what I call, a jittery movement. It moves it bit to port, it moves a bit to starboard, then it takes a sudden shudder. All caused by the fact that we have old swell rolling in from the North West and new swell rolling in from the North East.

Apart from the swell there is also the weather tail lying over the area and until the early afternoon we had grey clouds all over the place with the occasional rain showers. Late afternoon it cleared and we even had a tentative sun peeking out.

Whether it affected the guests, I really cannot tell. With a full house of 2150 on board and with large families all over the place it is hard to tell if there are guests “under the weather” or not. It cannot have been many as the public areas were as full as ever.  A major attraction today was the shops who were celebrating “Black Friday” sales by clearing out the store rooms. Then in the afternoon everybody started to gear themselves up for the Thanksgiving Dinner on board. Either by getting all dressed up or by having a casual dinner in the Lido. What I find very nice to see is that the children are often better dressed in formal gear than the rest of the family. For some of them it is even a bigger adventure than just going to a special dinner. 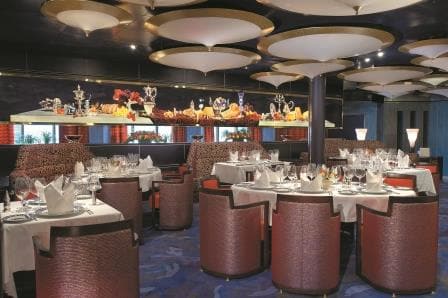 The Pinnacle Grill on board the ms Westerdam. Stock photo Holland America Line

We have of course also Non North Americans on board and for them thanksgiving is not such a big thing.  If you are religious you might go at home to the midweek thanksgiving service for the harvest but it is not a special feast.  If you are not, then the day passes by without any special meaning. Quite a few, especially the Europeans, grabbed the chance to go to the Pinnacle Grill tonight which is our specialty restaurant. The special menu is different from the normal fare and even tonight there is no turkey on the menu. A special restaurant in formal atmosphere makes for a nice ending of the cruise.

The ship will continue to wobble until tomorrow morning 06.30 we turn to the south and sail into the lee of the island of Little San Salvador as Half Moon Cay is located on the south west side. A good thing as well, as on the North side waves of up to 16 feet are expected. But as we will be in the shelter of the island it should not affect us.  How it will be for the rest of the weather is a different question. It all depends on how this depression system will continue to affect the rest of the area. The Bahamas and Florida.

Currently we are expecting a very windy day with winds over 20 knots, even in the lee of the island and a fair chance of showers. Even the temperatures are down to 25oC or 77oF.  I hope the rain will stay away so that the children will still have a nice beach day. One little toddler I saw today had invested in a new bucket and spade in St Thomas and was all ready to dig a big hole in Half Moon Cay beach. I hope he is not going to be disappointed. When I saw him he was in training by trying to dig up the Lido deck but was not getting very far.