The sun was merrily shining today over Venice, making it a nice start for the Easter Weekend and a good thing for the ship as well, as today we started our practical drills; bringing into practice what had been learned during the individual training sessions.

For everybody there is a lot to learn and to practice, indeed for every department and every rank. The Koningsdam has been built with the most recent technology which takes time to master but also we are different from the rest of the fleet as we have indoor mustering for the guests. This requires a total rethink of how to deal with traffic flows and the crew involved; with counting guests, guiding guests towards to right location and locating guests who do not show up or who have strayed into the wrong territory. There are about 15 teams involved with this, apart from the regular lifeboat crews, they all have specific functions which have to fit into a large jigsaw puzzle where no piece can be missed. 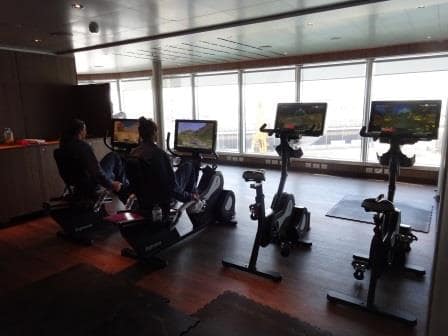 The Ocean Spa equipment being tested. Never thought about the fact that those monitors above the equipment have to be fully tested as well ? Not a bad job for the Ocean Spa Ladies.

And these drills which involve all 1036 crew members will only intensify in the coming days. That is why it was so nice to have a sunny day today as it involved a lot of standing outside, just waiting, while in the ship the officers and trainers where checking if what they had taught was also correctly implemented by the crew. And as there is always one………………………………  You have to find that one and that takes time. 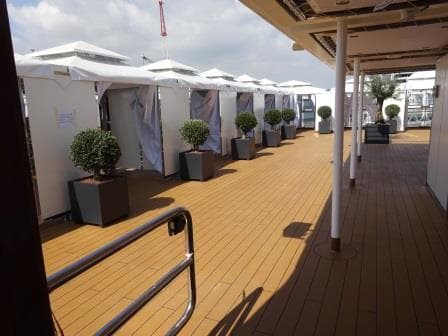 The Retreat behind the Crowsnest. All Cabanas are lined up in a U shape around the outside deck railing.

While the ship’s crew was taken through its paces the shipyard is continuing with it’s clearing up. Area’s which were already more or less complete but had thus far not been  visible as the deck area was used as a sort of storage and work area for various locations. One of those areas is the private Cabana deck, officially called “The Retreat”, on deck 12, right behind the Crows nest. As this deck has a large open space, it was very convenient to park the garbage skips here and thus you could not see a single Cabana anymore. 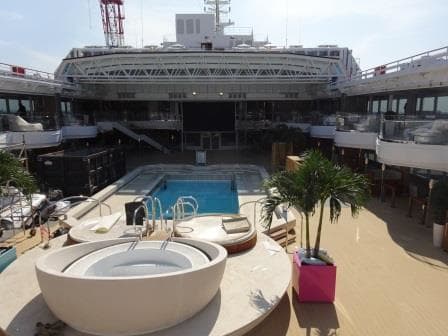 The Lido Deck, almost clear of all the workmen’s clutter.

Similar for the Lido Deck. This location is really a ship outfitters dream. Large and spacey and inside when it rains (close the Magrodome) and open when the sun shines (open the dome again). So it was not easy to get everybody out and it was not until todaythat is was sufficiently cleared to get a better impression of the layout and space. For me personally this is the most impressive space on board, two decks centered around a nice pool and two Jacuzzi’s, surrounded by the food outlets and 2 bar’s (upper and lower) and the various sitting areas. It really has a wow factor when you walk in.

Inside the ship, the yard has sent in a whole army of cleaning ladies. The crew who had been helping out is now fully immersed in trainings, drills and getting their work areas ready and thus the yard now has to rely more and more on their own lady-power. Today I counted 18 of them in the Queens Lounge, hovering, scraping (always those glue rests), cleaning and polishing. Polishing is another thing; while our other ships have a lot of brass in the public areas, the Koningsdam has nearly nothing. It is either wood or it is shiny stainless steel where normally brass would have been. The only brass I have found thus far is the melted shoe, the art in the main staircase, which I showed a picture of in one of the previous blogs. 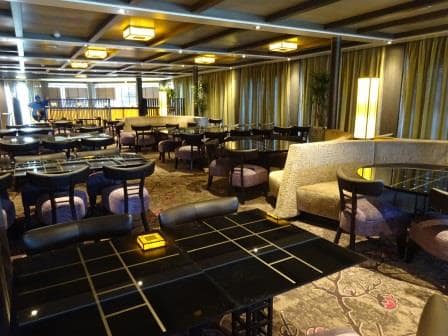 As predicted the Tamarind Restaurant has now been completed and the service staff here are busy with bringing in all the linen, utensils, crockery and cutlery. They have been working already on dry runs on how to run the restaurant in the most efficient way and now the tools are brought in to make it more life like. 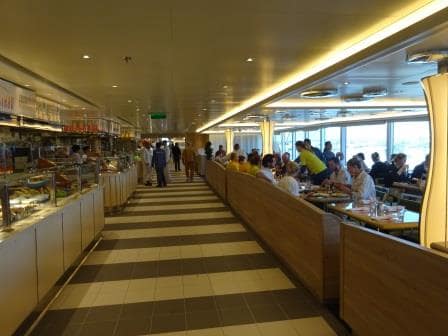 The first customers in the Lido. As usual everybody tried to get in right at opening time but because of the food station lay-out there were no long lines.

In a similar way the Lido has come to life. For the first time it opened today for lunch so the chefs could do the test runs to see if it all works. The lido restaurant on the Koningsdam is officially called the Lido Market and the cooks will now work at specialized stations each with a themed item. The next step will be to run this new setup under pressure, e.g. with a lot of customers and thus the earlier they open, the better it is. It will certainly reduce the lines in the Lido as you can now go straight to the section of your interest and are no longer held up by somebody dilly-dallying over a piece of bread which you do not want. 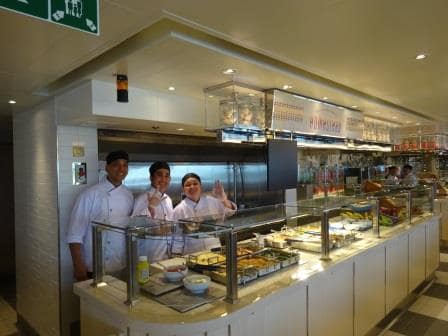 Happy faces. Finally they can do what they came for: Cooking.

With the Lido cleared I could now also get a clear view of the Canaletto Restaurant which is located in a corner of the Lido and will offer Italian food in the evening. It is not as large as on some of the other ships but with more Restaurants available there is no need for it. There is plenty else to choose from if one restaurant would be full. 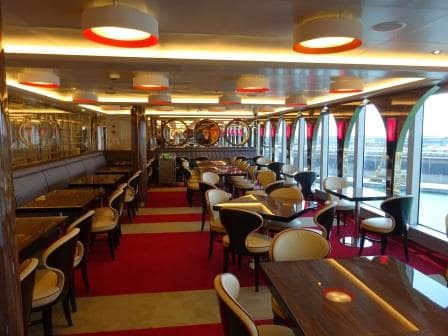 The Canaletto Restaurant located on deck 9 starboard forward in the Lido Market.

Tonight we are going an hour forward and everybody is quite interested to see if all the ships clocks are marching according to the command from the Master clock on the bridge. In the last few days the installers have been adjusting and aligning all the clocks in the ship and tonight they can do a real time test.

I am ending again with a piece of art. Now all the work is out of the way, the larger pieces of art are being brought in and today this piece was revealed opposite the Explorer’s Bar on deck 2. I have no idea yet what it means but its light texture forms a nice contrast to the darker tones of the wall paneling of the remainder of the public area. 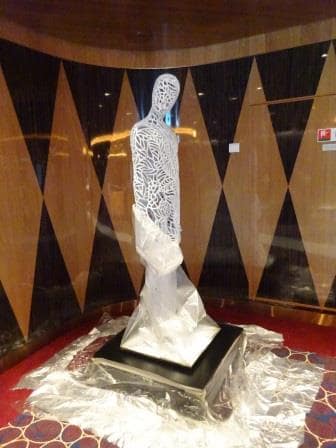 The official un-wrapping of a piece of art in the Music Walk.