Today is the 25th. and we have just a week to go until the delivery of the ship on the 31st. of March. Then  3 days later we should be ready to commence our first cruise. Which will be a 4 day shakedown cruise from Venice to Rome. 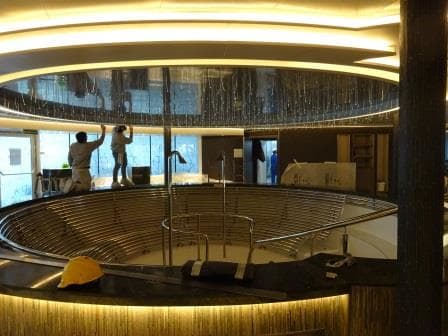 The Hydro pool in the Ocean Spa with all the coverings removed.

Today it is a grey and dull day outside and they are working inside deck 2 and 3 where the preponderance of the public rooms are located. Today it is a major delivery day and section by section the protective covering is removed for final inspection. This final inspection is not done by the Officers of Holland America but by the Design & Building Team of Carnival Corporation. They ordered the ship, approved the drawings and the building specs and they have been directly responsible for its progress and delivery. We represent the future owner and operator and our job is to get the ship operationally ready.  When things are not working or not correct as it should be “Remarks” are made and these “Remarks” are then sent back to the yard. After follow up and correction, they are returned to check and double check again. I say “we” but it is really the officers who are doing this, each his or her (we have two lady officers in the team) assigned specialty which they will also be responsible for once the ship sails. 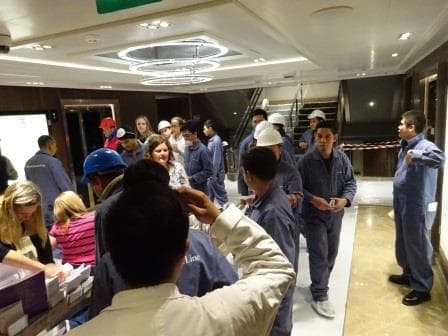 The Medical Department surrounded by crew collecting their papers.

Part of all this work is focusing on changing all crew members from a 1000 loose persons into a highly cohesive group called the Koningsdam crew. What is the same for everybody, regardless of function and rank is the safety aspect and that is governed by the safety function. Third Officer Administration assigns each crew member based on his/her skills and normal function on board, a Safety Function. A lot of safety functions are connected to the job and are thus the same over the fleet. Thus the Captain’s function will always be Overall Command, the Exe Chef a boat commander as he has leadership skills and a Cast Member Communicator in the Lifeboat as he/she has empathy and communication skills. 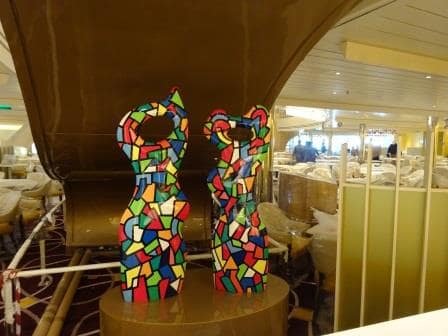 Walking into the Dining Room you will see these sculptures located behind the entrance desk. They represent “Mediterannean Sea Lady and Gentleman”. They were made by an artist called Choi Sung Chul, who specializes in painting with car spray.

Today everybody received their “lifejacket card”. All lifejackets have a pouch which takes this card. The card has a safety number which relates to the Emergency Plan of the ship and this number then correlates with the function to be executed during an emergency.  Thus today there was a steady throng of crew descending on the Dining room and picking up their Lifejacket card and receiving back their medical passport after it had been verified by the Medical Staff to ensure that all shots and checks were still valid. We are now all part of the same safety machine. My function is “As Directed” as there cannot be two captains on the ship and thus I can be used for anything needed. 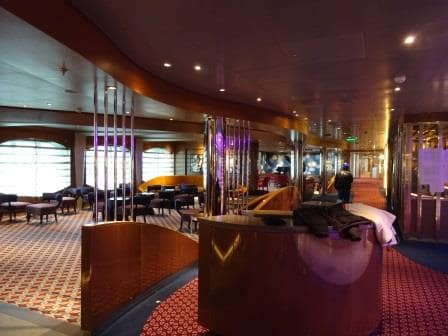 The Ocean Bar has two sitting areas. One which serves as a waiting / cocktail area for those going to the Sel de Mer or the Pinnacle straight across and the other one for regular cocktails with a piano player in attendance.

Thus today the focus was on the delivery of deck 2, where we have the Culinary Arts Centre, The Sel de Mer, the Pinnacle, the Ocean Bar & sitting area, the Lower part of the Queens Lounge and the Music Walk.  As a sort of ripple the clearing up moved from the stern to the bow, stopping at the Queens Lounge and the rest of the Music Walk. Today the chairs and everything loose was installed and then that area is complete, apart from the tinkering with small items which will continue until the ship is finished and maybe even into the Shake Down cruise. 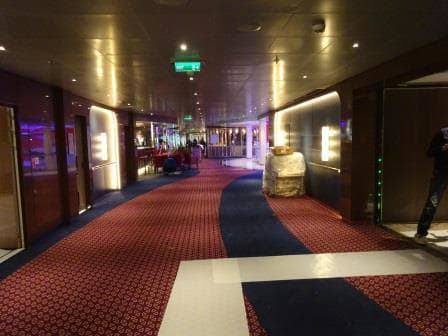 Finally we can see all the way aft over the Plaza Deck, Deck 2. To the far left is the Ocean Bar.

That is why we are doing a shakedown cruise from Venice to Rome. I have now been involved with several new-buildings, re-buildings and major refits and it is amazing what pops up as soon as the ship is really taken through it spaces. (Or when everybody flushes the toilet at the same time……..) Thus there will be a riding crew to catch what was not caught during the delivery process. By the 8th. when the official first cruise starts everything should be 100%. 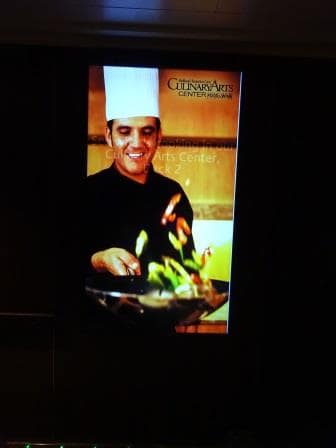 The displays on the hall ways have been switched on advising what is going on.

In the meantime, as all the final wires, buttons and handles are installed, more and more is coming to life. Last night we had a total water stop for 12 hours to see if all the machinery in the ER worked and today, the lights go out and on, section by section of the ship to see if the safety trips are working under load.

The main thing the crew now worries about is if everything they need is there and if not, will it get on board in time from the warehouse. There was great relief today in the Dining Room when the napkins were found for the specialty restaurants, hidden under a pile of other boxes ……………. and thus life goes on. 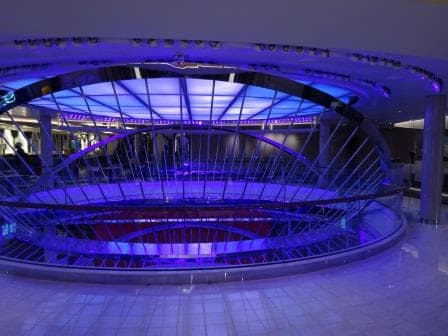 What also came on and is currently being tested is the ambient lighting of the Atrium. During the day the colors reflected by the central sculpture will slowly change reflecting the mood of the day. As I am not a professional photographer, the lights came out much more blue than in reality. It really looks very subtle.