Things are heating up; we have the USCG on board for three days. Because the ship will be calling at USA ports it has to be inspected by the USCG before they can issue a certificate of acceptance. You can do this in the USA itself and then the ship will be docked in the first port of call for an inspection lasting three days. The challenge is if they want a modification or a change then you do not always have labor and parts available while there, as most ships are European built. So for most new cruise ships who will be calling at the USA it is done at the shipyard. The USCG has an office in Europe which also deals with these sorts of things. Thus the yard people are currently going around with the Officers to check and inspect each safety item on board.  Once this all is done the ship will receive a certificate which will remain valid until a regular inspection is carried out in an USA port. That inspection will then be similar to what each cruise ship goes through every six months. 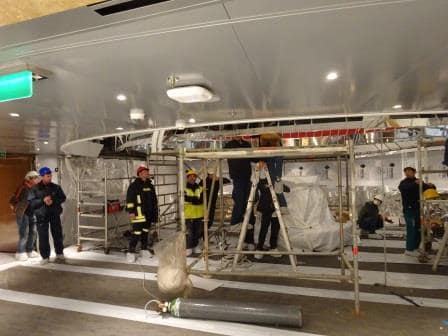 Two Chinese hard at work on the ladder and at least five Italians carefully supervising what they are doing to their ship.

It all happens in between all the yard people running around and finishing up all sorts of items left right and centre. Today the large Atrium sculpture was permanently secured to its supports as the work around it is finished. As the whole installation was made by a Chinese company its own fitters came today to finish the work. 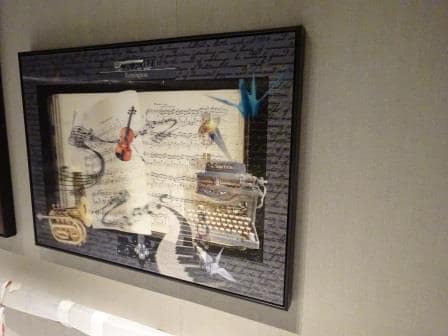 Today this appeared, a 3 D painting. Hard to photograph but when you walk by several items suddenly push themselves forward.

As mentioned before at the moment mainly smaller things are taking place. But a lot of it as we still have a 100 yard people on board. Carpet suddenly appears, a chest of drawers pops up in an empty space, wall and floor coverings are being removed showing yet another sort of carpet. 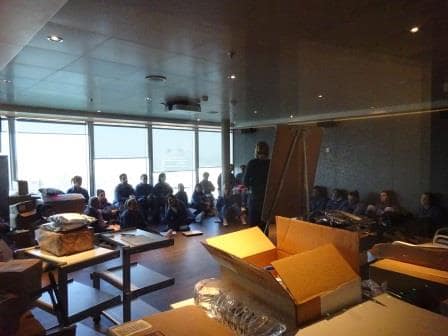 All the Ocean Spa Ladies (and Gents) sitting in the window. listening to a shore side company instructor.

Training and instruction is going on at full speed. Not only the Safety Training but also work specific. One of the areas of the ship which is considerably different than anything we had we before is the Greenhouse Spa. There are more treatment rooms and they are over two decks with an internal spiral staircase connecting them.  More treatments mean more Spa Ladies and today they had corporate training about the new setup. They are all waiting to be able to finish off installing their inventory but most of the rooms are still awaiting final delivery. 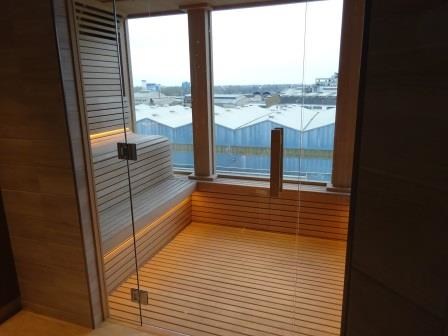 When the ship eventually goes to Alaska you can be nice and warm inside while it is freezing cold outside. Currently there is only a rather boring look at the warehouses of the shipyard.

One of the more intriguing rooms in the Spa are the saunas on the portside. They are not internal and they have a large window. So while you are sweating off last night’s dinner, you can overlook the ocean and any scenery that might come by. 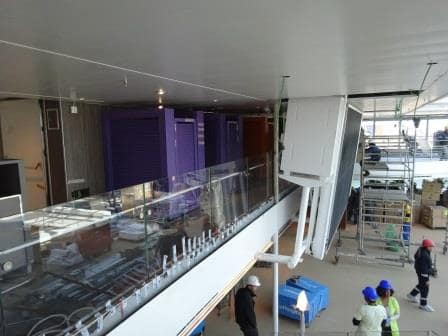 Nice purple is never a bad color. The others are hidden behind the movie screen.

Same is going on with the area around the two story Lido Deck area. Still lots of completions going on. The movies screen is working and now the protection has been removed from around the back of the screen and as you can see they have installed a number of shower cubicles behind it. As the screen blocks any view from this area this dark corner has been chosen for having the showers. To make it a bit more lively the shower cubicles have been painted in the vibrant colors of Purple, Green,and Orange. Very vibrant but as they are obscured by the Movie screen it does not look out of place and livens it all up. 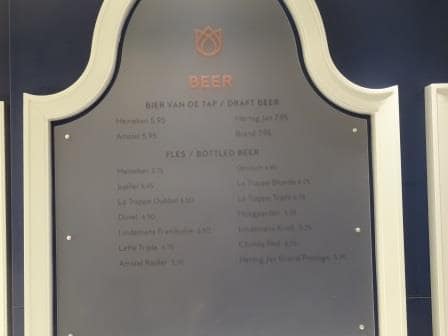 The Cafe serves Draft and Bottled Beer, Fresh Coffee and other refreshments for which there is a charge. Nibbles and Dutch food such as the famous “Bitter Ballen” are free of charge.

Today they finished the Grand Dutch Café and I am a happy camper today as they will have my favorite Beer on tap, Hertog Jan from Belgium. This is hard to get where I live in England, so now I have a plan B for the occasional pint when I am not in Holland. A nice detail is what they have done to the high tables in the Grand Café. 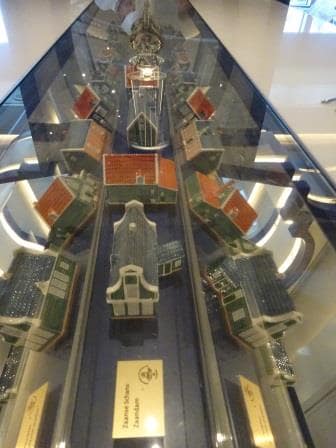 A Dutch Street in miniature under glass in the table. They are reflected on each side by mirrors.

There is a groove in the tables which is covered by glass. In the groove are miniature Dutch houses which are real copies of what can be found in Zaandam and other Dutch heritage villages. 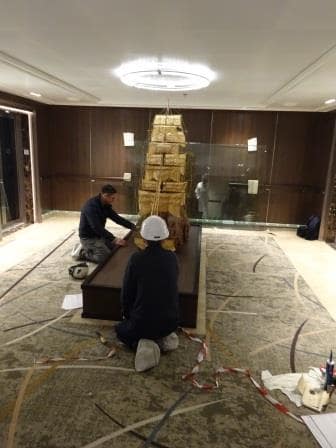 A square rigged ship is being installed.  ……………

With all the Art being installed, very nice and sometimes unusual art, I was getting worried about nothing being nautical. But today installation was in progress with a fusion between nautical and music. A sailing ship in the form of a musical instrument.  It is being placed in the lobby of the forward staircase on deck 9. 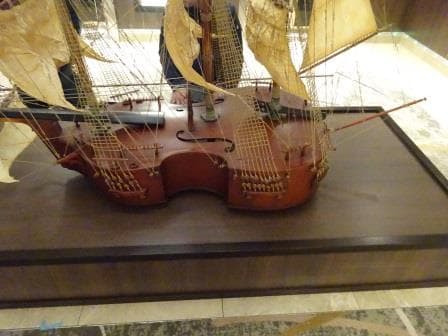 ………………..Until you look at the side and you see it is a square rigged Violin or Cello.

With the ship being in the delivering process it is very hard to walk around. Everywhere areas are being closed off with Fire Screen doors, caution tape and cardboard. This makes it a puzzle to get from A to B and even more difficult to take some nice photos. Tomorrow should be better.