As it was a nice and sunny day yesterday and nearly windless we paid the price for it this morning. A white woolen blanket descended upon the shipyard. It was not until 11 am. before it slowly started to lift when the air warmed up a little bit. As can be expected close to the delivery of the ship, cleaning is becoming more and more a focus. Maybe because it is Easter which is an important Roman Holiday or maybe for other reasons but the number of Italian Cleaning Ladies has gone down and are now replaced by Polish and Romanian. Two languages I had not heard on the ship until today. We have contractors from everywhere, depending on where the specialized equipment was bought and thus we hear voices from Scandinavia, Germany, UK, Spain and a lot of other countries as well.  But East European I had not heard until today. With all the different nationalities of crew thrown in the mix, we have a nice international situation on our hands. 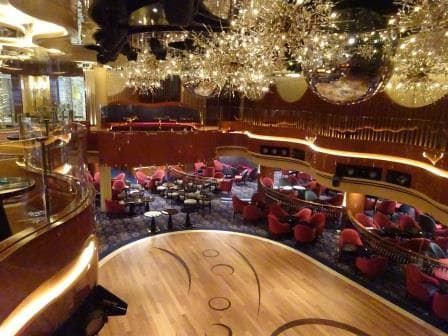 This is a shot from the upper level sb Queens Lounge looking aft.

Cleaning ladies mean the clearing up continues on a relentless pace and more and more becomes accessible and in more and more areas the final fittings and furniture are being put in place. With everything cleared away the beauty of most of the public rooms is now clearly visible. The Centre piece and universally liked by everybody is the Queens Lounge which design forms a nice bridge between the more traditional ships of our fleet and the modern Koningsdam. This lounge will be one of the focus points in the ship. 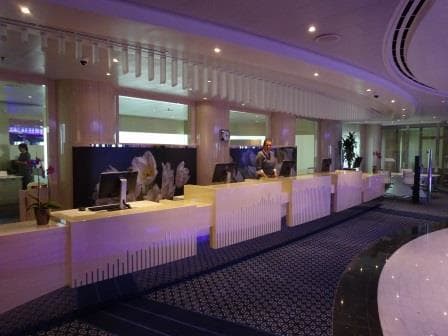 The Front Desk is very open and also with an open Back Office behind the pillars. Then there is a closed off administration part on the stern side of the Atrium.

The hotel department is slowly getting in its stride of really being a hotel department. The Front Desk is now open and all queries are being directed there now. It all helps with building up the necessary routines for when we have a full house. So I took the chance to do something all lot of guests do, I made a complaint. Not really for the ship but to be passed on to the shipyard. For some unknown reason they changed my bedside lamps and now the new one does not work. Thus I did what every crew member who lives in a Guest Cabin has to do, report it to the Front Desk. 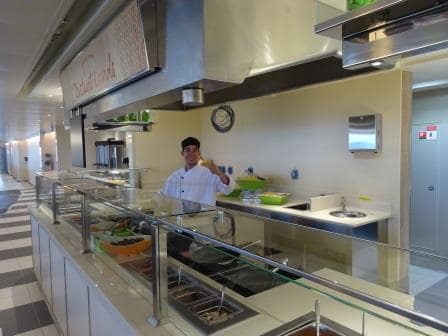 The first Pasta ever served in the Lido Market. Penne Carbonara.

What also is happening now, the main dining room upper level has opened for service and is offering Breakfast Lunch and Dinner in addition to the Lido Market and the Crew and Officers Mess. Just runing the operation it is still the best way to find out if everything works, even if it is on a smaller scale with less people. More and more stations in the Lido are being opened as well and today I had the honor to order the first pasta ever being served in the Koningsdam Lido. Note the date 27 March 2016……………….. Maritime Historians will later on record this in their books as a very significant date in the delivery process of the Koningsdam………………….lol. 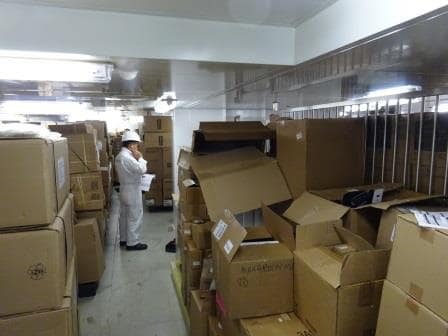 Where is that ‘darn’ box.

To supply all those restaurants the store rooms are now full to capacity apart from the Perishables and fresh vegetables and fruit which are stored depending on the number of people on board. So this morning we could observe a crew member trying to find a box somewhere hiding in all the pallets of 1000’s of boxes which have not all yet been placed in their normal location for easy retrieval. 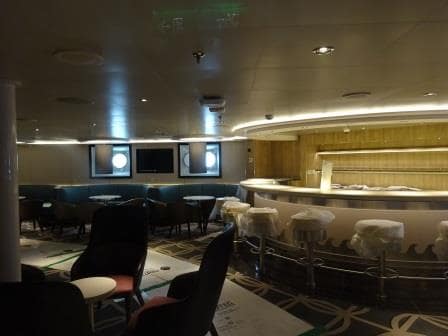 Quite quickly since we came on board the officers and crew went to their assigned cabins and the mess rooms came in operation. What was not finished yet and is now complete and waiting for delivery is the Officers Bar. On most ships this is in the style of an Irish Pub but here on the Koningsdam the design has been kept in tune with the overall lighter colors of the ships interior. 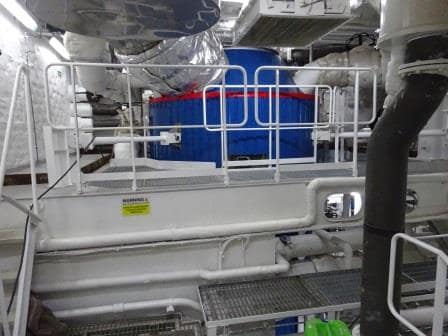 The Top of the Aft Boiler, which is a vertical one and rises through three decks. Here water is turned to steam for the various operations on board.

This morning I also made a little tour through the Engine Room where the supply cabling from the shipyard has been removed and only final delivery work is still going on. And that will take a while as each piece of equipment needs to be calibrated and mostly likely be recalibrated once it is fully operational. As a Deck officer I have the greatest respect for engineers for two reasons; A. I find it amazing that they can work somewhere where it is hot, noisy and there are no windows and B. They manage to keep all those pipes apart and can always find the right pump and closing valve.

Thus I am ending my blog today not with art but with a highly romantic picture of a section of one of the pump rooms, where the oily bilge water pumps and the fire pumps are located. 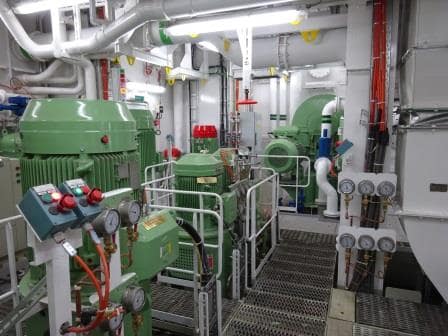 This is one of the pumps rooms on board. All the green round things are pumps and the ones with the red top are the Fire Pumps.