The weather is finally acting according to what it should be and we had a glorious Caribbean Sea day. The normal trade wind is blowing, the sun is shining and there are only some normal cumulus clouds in the air. The guests are complaining that it is hot outside on deck and thus we have the correct weather. We went an hour forward last night to get back on Florida time and with staying as well, our schedule has become quite tight. Thus the Captain is keeping the pedal to the metal, as well because he had to conduct a crash stop today. 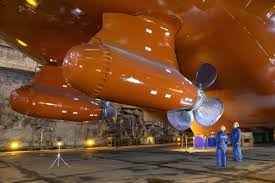 The standard setting for Pods. They pull the ship forward. We have Azi pods made by ABB. There also other company’s.

Once a year we have to conduct a crash stop to ensure that we can slow down very quickly if needed. Normally we do this before going into dry dock. But as the ships normally only go dry every 2.5 years we sometime have to do it at sea.
It means pulling the handles from full ahead with 20 knots speed to full astern and then see how long it takes before the ship has come to a complete standstill and how much distance it took to accomplish this. On regular propeller ships, it means flipping the propeller blades full to the other side, or reversing the turning of the propellers if they have fixed bladed screws. For a podded ship such as the Zuiderdam it means turning the Azipods by 180o degrees and let the propellers push the water the other way.
Azipods, when going forward, have the propellers in the front of the Pod so they have the optimum flow. 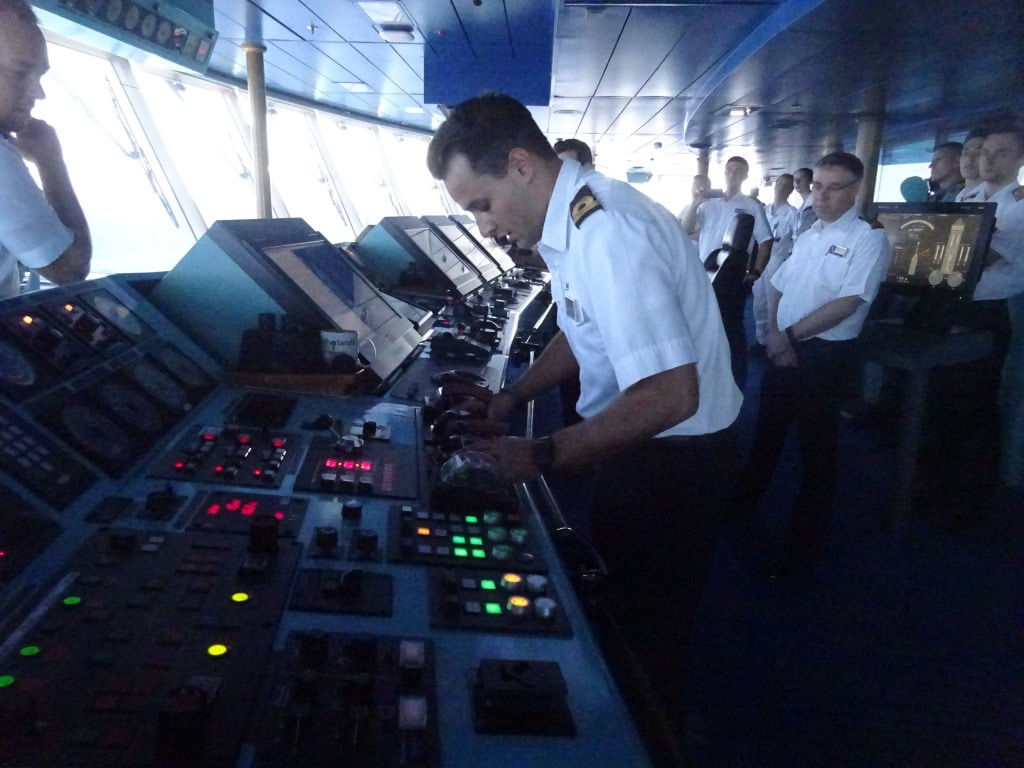 Then when they are turned 180o, then they are behind the pod and so it looks as it does with a regular ship. That was tried this morning. The maneuver can be compared with you driving your car at 70 mph. and then pulling the hand brake to avoid a collision. It works but it is not such a pleasant experience. Thus the captain announced to the guests that they might feel some vibration. The engineers are on standby to ensure that all goes well downstairs and then at 10.30, the Officer of the Watch pulled the handles. 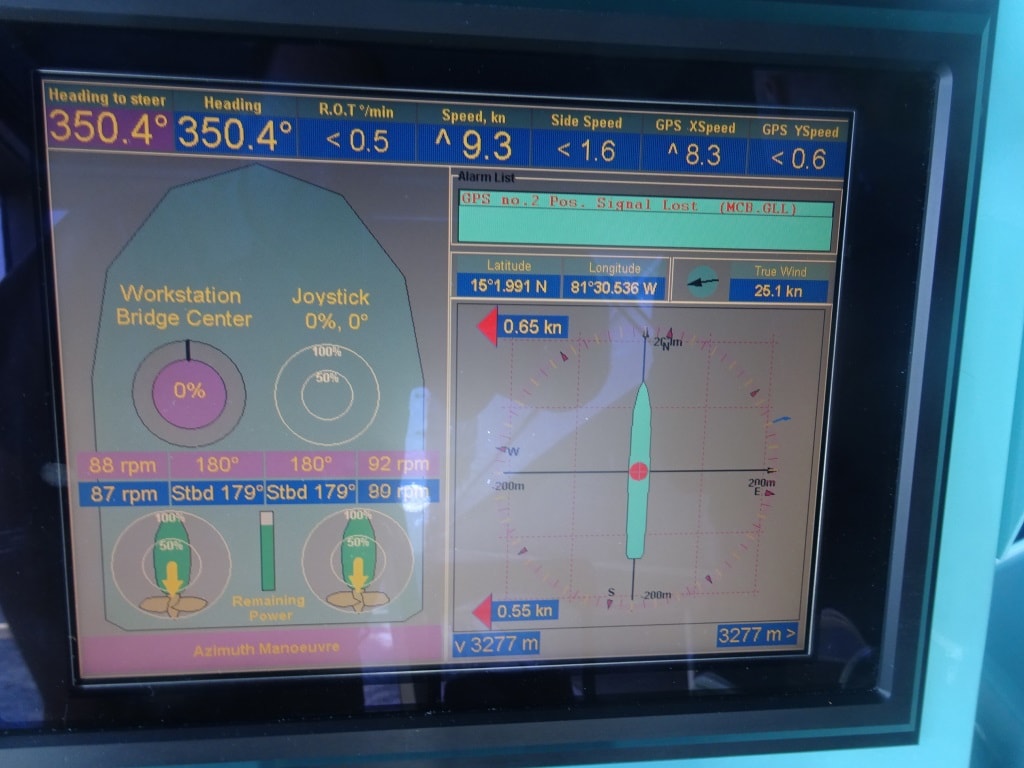 The readout on the bridge, the speed is already down to 7 knots and the Azi pods are point aft.

When the pull of the propellers stop. You immediately get a slowdown in speed and then the de-acceleration sets in as soon as the propellers get a grip on the water, but now the other way around. The vibration starts the moment the ships speed has reduced so much (from 20 to about 7 knots) and the Azipods are now pushing water under the ship’s hull. That gives bubbles and turbulence and that causes the vibration which carries quite strongly through the ship.
We can see that a ship is coming to a standstill, as soon as the foam of the waves, caused by the reversed propeller wash starts to march forward along the hull. Once it is amidships, the ship has come to a standstill. If the the wash travels further forward then the ship is going astern. 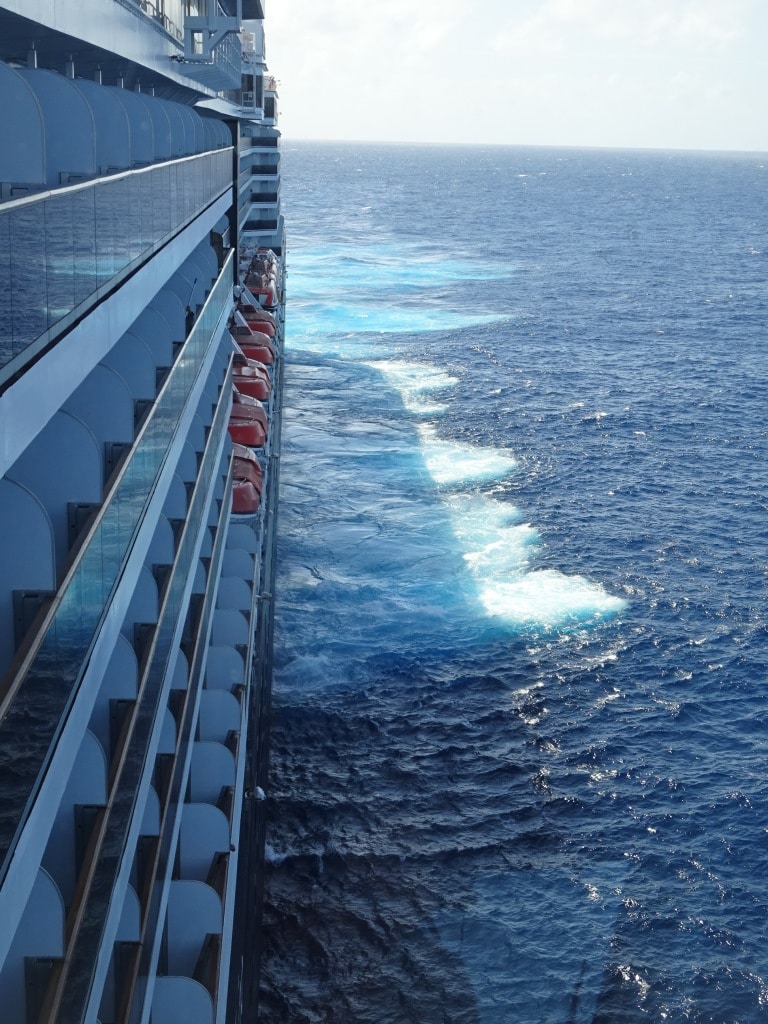 The propeller wash is coming to the midships. the ship has stopped in the water.

The Zuiderdam stopped after 6.6 cables distance which is about 4 ships lengths. Back to your car; you drive into a garage which can park four cars in a row of your size with 70mph and then pull the hand brake. Then you manage to stop before hitting the wall. That is the idea that we do with a ship of 86000 tons of momentum. 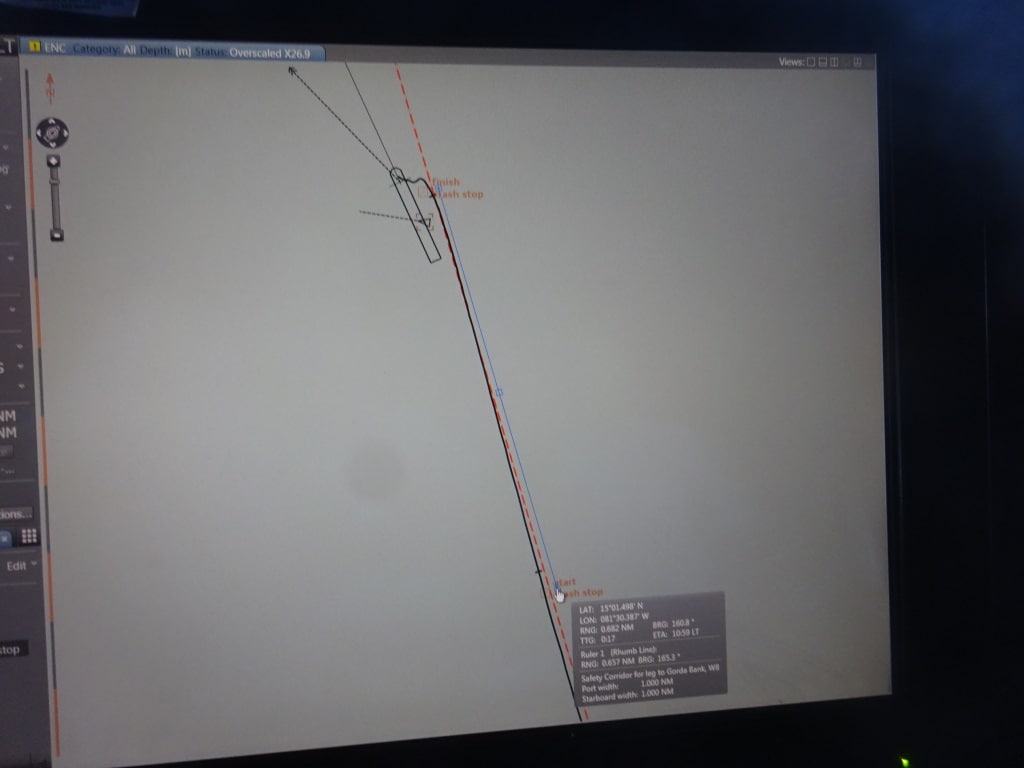 The read out from the bridge chart plotter.

As you can see from the photo above, the ship stayed nicely on a straight line, until it had almost come to a complete stand still. Then it got caught by the Trade Wind blowing from the Starboard side and that started very quickly pushing the ship of its course. But one kick ahead and the ship was back on track. The whole happening, from planning to speeding up again took less than 10 minutes.
Today we sailed off the coast of Costa Rica, El Salvador and Nicaragua. From there we will head on a straight line for Cabo San Antonio on the west side of Cuba. We should be there sometime tomorrow morning, all depending how much push we get from the Gulf Stream which we are now nearing. The weather looks the same for tomorrow and so the guests who did not get sun burned today will have another chance tomorrow. 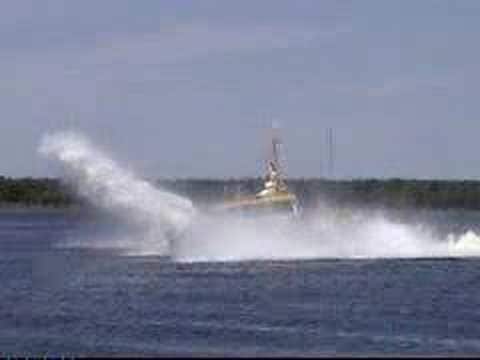 I could not resist this one. This is what happens when you do the same thing with a small boat. (Courtesy: Metal Craft Marine)