Things are always exciting when you mess around with boats. The Panama Canal does it as well and thus we arrived an hour late at the Colon 2000 terminal and found a large line waiting to reboard the ship. But it was not everybody and then it turned out that for a number of reasons some of the tour buses came back quite late. The last tour guest was back with more than an hour’s delay. And that pushed the departure time of the Zuiderdam back considerably. So it was not until well past 21.30 that we departed, luckily with all the guests on board. We did not lose anybody in the interior of Panama.

As mentioned yesterday it is a tight schedule between Colon and Puerto Limon, even with an hour back, and on departure we already knew we could not make up the time. When possible the Captain tries to get out well before 8 pm. in Colon as every minute really counts. And then we just make it by the skin of our teeth to Puerto Limon. So we knew we did not stand a chance this time. Thus Plan a: Pedal to the Metal and Plan a-extra: stay longer. We might be docked one hour late so we will at least sail an hour late. Late arrival will normally have a knock-on effect on the tour departures and thus we might have to wait even longer.

And that turned out to be true. We had the gangway out just after 08.15 hrs. having arrived 1.5 hrs. late. About the same amount of time as we lost in Panama. To complicate matters, now our buses were not leaving as early as planned and that gave congestion at the tourist stops as the now the coaches of the Mein Schiff 6 were leaving at the same time. Mein Schiff 6 (a sister of Mein Schiff 5 and 4) is a bit bigger than the Zuiderdam and has a lot more guests on board. And thus generates a lot more tour guests. As a result the EXC manager already predicted that some buses might not be back until 5 pm. and thus the Captain decided to stay at least that one hour longer. And if the tours are not back then we will wait even longer. Next will be two sea days and that will give us enough lee way to make Fort Lauderdale on time. Important for the guests, as about 95% is going home (we have some back to back cruisers) and important for me, as I will be transferring ships and will move to the Veendam. And thus the blog is going to Cuba. 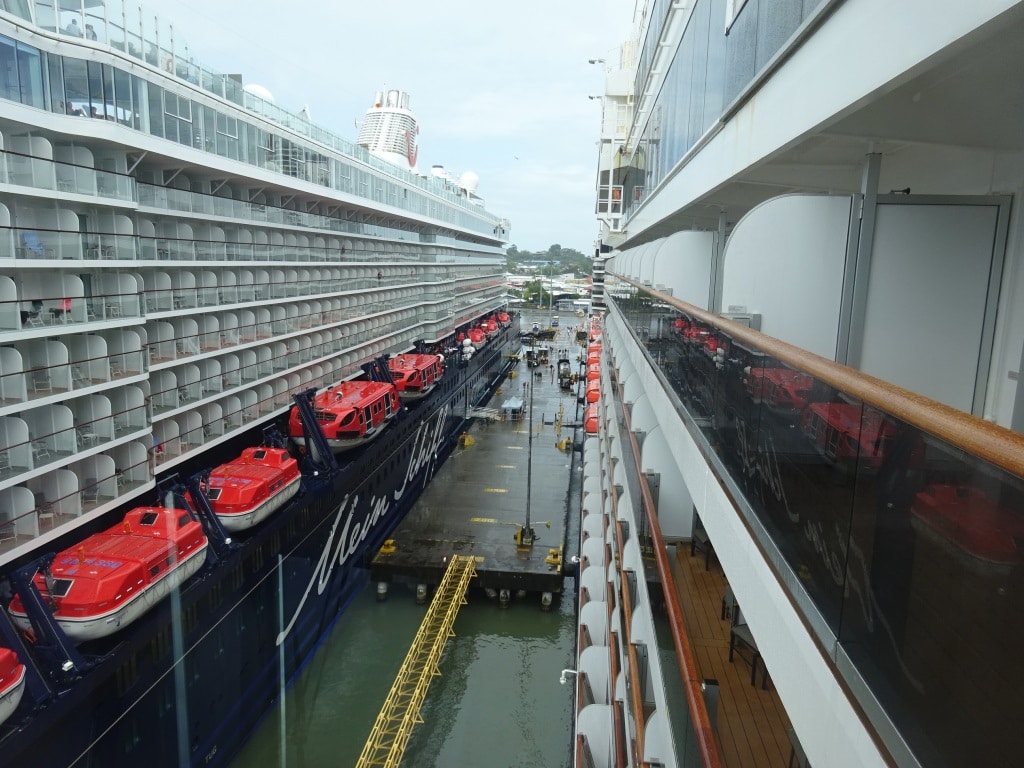 A wet and rainy pier between two apartment buildings both with a blue hull. In Puerto Limon it always seems to rain during our drills. Once the drills were over, we had glorious sunshine.

With the end of my time nearing here on board, I spent the morning assessing the General Drill, which each ship holds every 4 weeks, with smaller drills during the other week. I have been training, pushing and harassing the crew to get them at their peak performance for the coming audit and today was a sort of exam day. First the fire drill which I can do by myself and then all the officers fanned out all over the ship, to observe various areas, as by the 2nd alarm we have all 800 crew on the move. And that continues until we have all the boats on the sea side safely into the water.  I was playing a nasty guest who did not want to go to the lifeboat station. We do not have them very often but sometimes it happens among those who are on board for multiple cruises and who are getting fed up to go to the boat drill each time a cruise starts.

We have search teams who comb out all the public rooms and cabins and when they find a guest, that person is urged to go to the cabin or to the Boat station. If that does not work, then somebody from the Front desk will show up to use all the people skills available to get some movement. If that does not work, then security show up and they normally do get some movement. At all times our objective is to ensure that we will save ALL souls if the ship goes down, even the nasty ones. So the nasty-me got saved as well although it did give all involved a good amount of stress to accomplish it.

But you do not make world champions without pain, without frustration and without disappointments and Holland America strives to be world champions in lifeboat drills. Although we hope we will never get a medal for it due to a real occurrence. And thus we train, train, test, exam, review and train again. Until the crew is dreaming about life jackets at night.

Tomorrow we start the first of two sea days and then we are in Fort Lauderdale. The weather is supposed to give us not too much wind and a chance of showers. So just have to see what we will get.