The weather gods were with us and we arrived to observe a nice dry Panama day. The schedule worked out this time and the ms Zuiderdam moved into the first lock chamber at 06.30, just when the sun was rising. And that made it not too hot for standing outside on deck and watching the proceedings. By 08.00 we were out and moved to the anchorage to land over a 1000 guests on the land tour. We accomplished that by 11.00 hrs. and then we had to wait to go back into the schedule again. 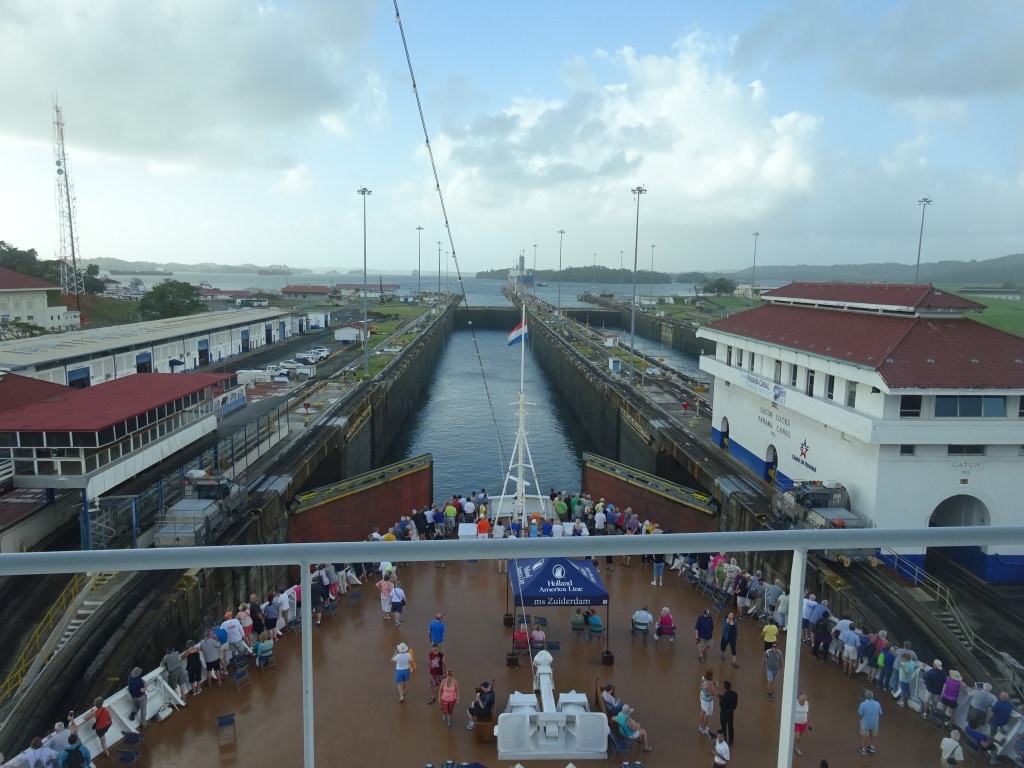 Sometimes guests ask me how often I have been in the Panama Canal, with these sort of dive in – dive out cruises you quickly build up a good number and I have now passed the 100 times in the Canal, although not 100 crossings yet.

From then on it was less smooth. Some big boys, panamax ships had to come through and they go slow as there is hardly any water flow around these ships as they are so tight to the lock walls at both sides. I think the original designers back in 1900 had never envisioned that some ships would be going through that would only fit exactly in the locks with only enough spare space so that the water could flow around the ship. We have now progressed to the 2nd Panama Locks where post-panamax ships can go through and we saw a few of them waiting today. They are either too long for the old locks or too wide or both.

Still it delayed us and the wish of the Captain for the ship to be docked in Colon by 16.00 hrs. was not going to be fulfilled and we were docked there just after 17.00 hrs. Hopefully the guests who were on the dock by 16.00 hrs. took his advice and parked themselves in the Bar with a cool drink in their hands. It is a very satisfying way to wait and see your “apartment” arriving and being parked in front of you. 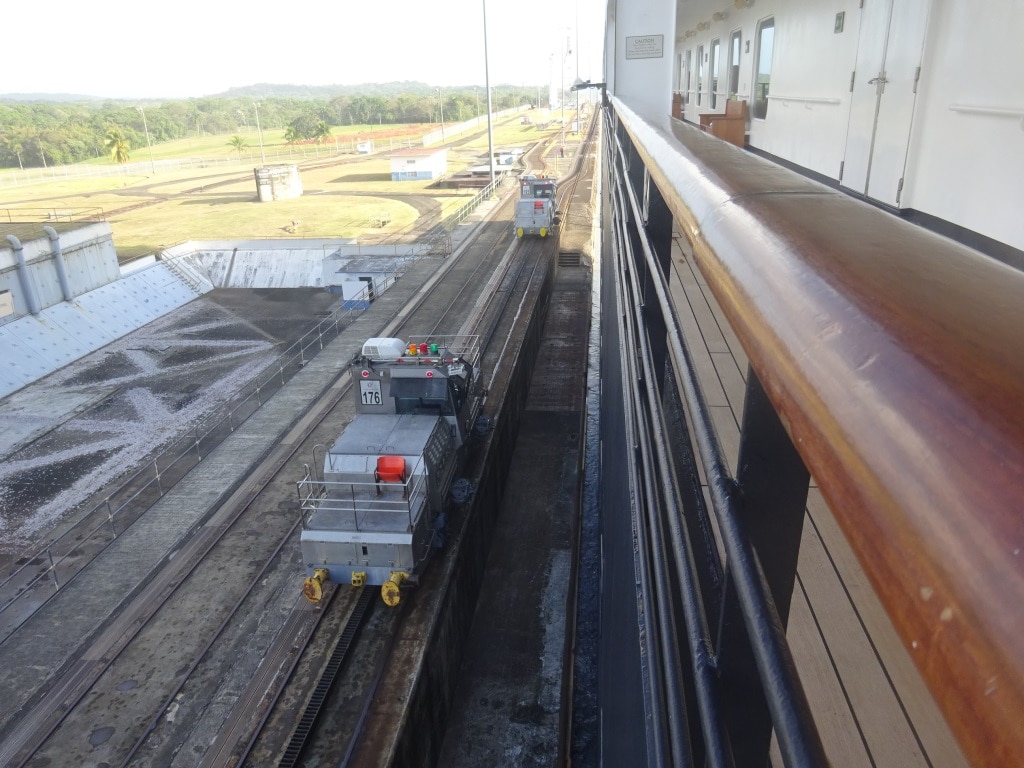 With high ships like the Zuiderdam we sometimes have 4 mules aft. Then the very last ones make fast on the mooring deck and the two more forward give out a wire to the Lower promenade deck where we have special Panama Canal bollards installed on the walk around deck. We have then 2 officers aft, one on the mooring deck and one on the higher deck  3.

For the officers on the bridge and fore and aft, the main duty during a Panama Canal operation is to monitor and keep track of what the Canal people are doing. The pilots bring their own sailor crew and their own tugboats, and while going in and out of the locks they have the locomotives or mules control the ship.

Maintaining the ships log on the bridge is the core duty. Since the grey mists of time, ships have maintained ships logs which note the most important things that happen to ensure there are records for just in case………………… In the old days, until about 10 years ago, it was with paper and pen, and then the electronic logs came. For each situation a template was developed and the Assistant officer of the watch fills in the blanks. For the odd situation that there is no template, there is a Free text option to cover the situation. 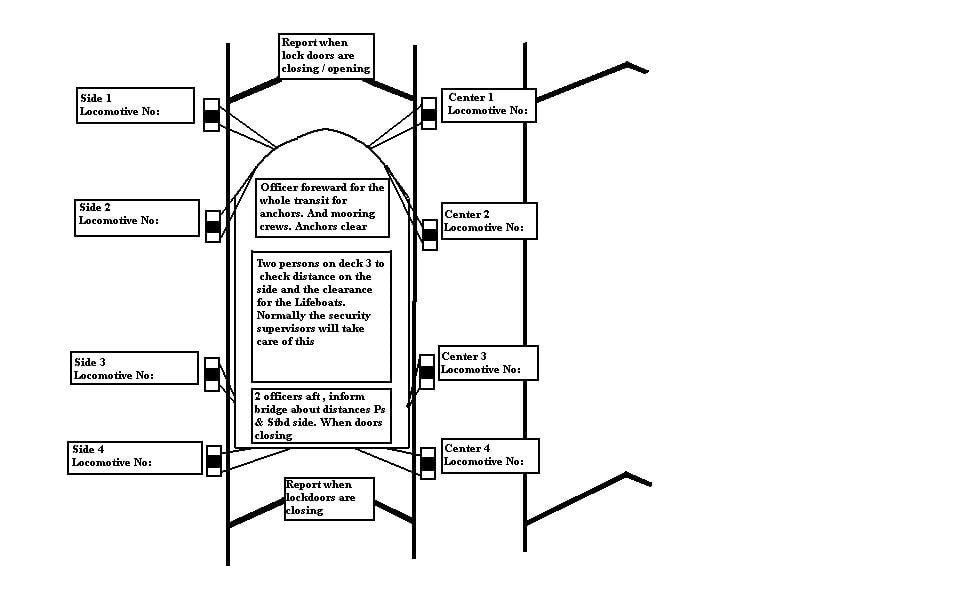 This is one of the templates which are used to ensure proper log keeping.

The officers fore and aft pass on the information about the entering and leaving the locks and when the locomotives have been made fast or have been released by the Panama Canal Crew. The handling of the wires from the locomotives are about the most dangerous part of the whole evolution so the officers on the mooring decks are watching like hawks to ensure that the work is done safely and with regard for the ships property. Occasionally a tugboat needs to be made fast and that is normally done by the ship’s crew as it mostly occurs when the Panama Canal pilot is not yet on board. Like when we have to wait as the entering of the locks has been delayed.

Tonight at 20.00 we will sail again and head for Puerto Limon in Costa Rico. That will be full speed and even with an hour back it is a very tight schedule. Weather for tomorrow, light winds and temperature of 27oC or 80 oF, with a 50% chance of a shower in the early afternoon.