It turned out that the predicted wind was the least of my worries. It was the millionaires who were bothering me this time. Unbeknown to the poor paupers of this world, which includes of course a poor cruise ship captain; St Barts is a special gathering place for the Rich and Famous on Boxing Day. As a result all their Mega yachts congregated at the anchorage and the biggest one, the Eclipse, parked itself at my anchorage. Thus I had to stay further out and thus the challenge started. A challenge that turned quite quickly into an un-manageable problem. The swell that made the ship surge in St. Maarten had not diminished overnight and now “attacked” the anchorage of Gustavia in a most peculiar way. The swell curved around the North West point of the island and around the South East point of the island and met in the middle, exactly where my new anchorage was located. Not something to be very happy about but something to focus on deeply and evaluate very carefully.

I let the Prinsendam float towards the best anchorage that I could see but it was not possible to get her out of the swell area. That meant that we had to figure out if the swell was low enough to work with when having the tenders alongside. At the same time, the wind started to breeze up, much more than forecast. That gave the additional complication that during the day the ship would yawn while having the swell from both ways. The only way to find out if this would work was to bring the ship to the farthest SE’ly heading that the ship would yawn to, while behind the anchor and then try the same thing with the farthest NW’ly heading. With the chief officer in the tender break I brought the ship on various headings to see what the result would be for a good lee side. To no avail, with the swell coming from both sides, nothing worked. The CO observed a surge every few minutes where suddenly the water level would raise itself to the tender door threshold and would then fall away completely. Turning the moored tender into a sort of involuntary elevator going from deck 4 to deck 3. That meant there was only one decision to be made, cancelling the call. After two hours of observing and trying I was not getting anywhere. When I called the agent to tell him the good news, he came back with the observation that the swell was also running into the tender dock and that it was difficult over there was well. 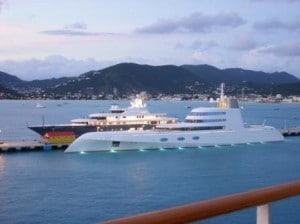 Two of the mega yachts observed while docked in St. Maarten. The next day a whole fleet of them would make my life miserable in Gustavia by pinching my anchorage. Nothing I could do about it. It is first come, first serve to the anchorage.

The ship turned around; we left the millionaires to themselves and the largest yacht in the port sailed away towards plan B. That was St. Johns Antigua, 60 miles to the South. They have four docks there, there was only one ship in and thus there was space for the Prinsendam. With the pedal to the metal I could make a 1 pm. pilot station at St. Johns and then alongside by 2 pm. for an afternoon call. It all worked out accordingly and with ever increasing winds we cleared St. Barts and headed south. By the time we approached Antigua it was blowing wind force 7; not a wind force that gives an enjoyable tender ride. It looked like it that the Trade winds were re-establishing themselves with a lot of pent up vigor.

The port of St. Johns is very sheltered for any winds except from the South West. With regular trade winds it is almost wind still in the harbor and that was also the case when we entered the port. By 2 pm.we had the gangway out and were happily docked opposite the Regatta of Oceana Cruises. That is ship is roughly the same size but as it is more modern, read boxy, it is not as long and high as the Prinsendam. Normally captains of other cruise ships always look down on me as the Prinsendam is quite often the smallest cruise ship in the port. This time I had a ship next to me, of the same volume but the Regatta Bridge was two decks below mine.

Sailing time was set for 7 pm so that the guests could see sail away before the show started and by 8 pm we were in open waters. To my utter amazement, the wind had fallen away completely and that was exactly what I needed. Tonight we will sail south past Montserrat and by tomorrow morning at 06.15 we will be at Base Terre on the Westside of Guadeloupe to pick up our pilot. From there it is 15 miles to the anchorage at Terre Haut inside the Isle de Saintes. It is a very tight anchorage, so I can not have too much wind and it has also to be from the right direction, make the call successful.