Although the wind had nicely dissipated while sailing away from Antigua the long ocean swell was still there. That is not good for tendering of course and thus we needed a very good lee in the coming port as it was an anchor port. Terre de Haut in the Iles de Saintes was a new port for me and thus I had to rely on the pilot who advised very strongly that everything was going to be beautiful (pronounced with a very French accent). There is no pilot for this island itself, you have to pick up a Guadeloupe pilot. Each one of them pilots all ports that belong to greater Guadeloupe. Thus we headed to Basse Terre on the SW side of Guadeloupe and embarked the pilot at 06.15. From there it is about 10 miles to the entrance bay of Terre de Haut. It is located in a very sheltered bay and according to the pilot when anchoring close enough to the beach; the ship is completely out of the swell. That meant using two anchors as the anchorage is not large enough to swing around in. 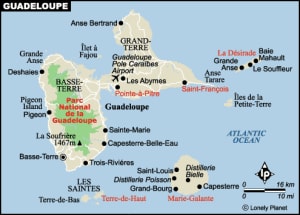 With two officers forward, one for each anchor, we invaded Iles de Saintes and entered through the narrow entrance from the West. Narrow because of two shallow patches (read 12 feet) with some deeper water in the middle. This calls for local navigation and the pilot lined up first with the local church above a red roof, followed by the bow of the doctor’s house over a tree. The local doctor lives in a house that protrudes from the rock in the shape of a ships bow with the bungalow on top shaped as a deck cabin. It looks very strange and gives the impression of Noah’s Ark steaming out of the Jungle. As a landmark it is very useful and thus gratefully used by sailors. 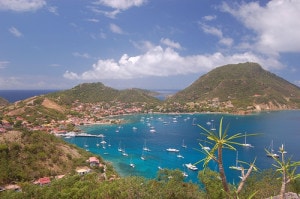 Overview of the sheltered bay, taken from the Eastern Mountain ridge that keeps the Tradewinds down to a nice gentle breeze. Picture from an unknown source on the internet

Next step is to bring the ship in position at the best anchorage spot and start paying out the starboard anchor. While the chain is going out, the bow is brought over to port until we have six lengths of starboard anchor chain in the water. Then portside anchor is going down and the portside chain is being paid out. At the same time the starboard chain is heaved up again until from both anchors we have 3 lengths of chain in the water. Then if the ship wants to go to port, due to wind and or current, the sb chain will pull her back and visa versa. With a consistent easterly wind coming over the mountain ridge, the ship will lay behind these two anchors. I still have then the option to drop the stern anchor as well, if the wind would start to veer but today was a beautiful day and two anchors kept us nicely in place. The swell was kept out of the bay by the Northern point of the island as the bay is nicely curved and we were anchored right inside the bend. I wish I could have crept so close under the coast in St. Barts. Then we might have been able to have stayed there.

Thus we had our first un-eventful day of the cruise with very happy guests, as it is a very pleasant little place. A bit of Saint Tropez with a Caribbean twist. A lot of French expats live here and a regular ferry service brings day trippers from the main island of Guadeloupe. I really would have liked to stay longer but the Sea Cloud 2 was booked for an evening call and thus I had to leave on time. That meant the reverse process in retrieving the anchors and then leaving through the Northern exit. From there we sailed around the North point of the island and then headed South East into the North Atlantic Ocean

Our next port of call is Barbados which is lying outside the Eastern Crescent of Caribbean islands that form the border of the Caribbean Sea. I have planned an early arrival as it will be a full house tomorrow. Also in port will be the Queen Mary 2, the Celebrity Millennium and the Silver Cloud. I will be docking the deepest into the port, so if I can get in before the rest, I have more room to maneuver. The QM2 is sticking out 40 meters, the Millennium 32 meters, so I am loosing 70 meters of the basin while swinging towards the berth. Enough reason to be early.

The weather is supposed to be typical Barbadian tomorrow. Sunny with a chance of an un-expected shower. 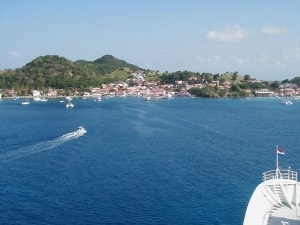 View from the bridge with a tender ride of less then 5 minutes.