We had our Christmas Carol concert and it went down very well. I am now in the cruise business for nearly 30 years with approx. 15 or more Christmases at sea and this was one of the very good ones. Whether it is because the show lounge is ideal for this or whether the Prinsendam crew is so special or was it the organization with Senior Management in the lead; I do not know but it flowed without hiccups, it sounded very good and the guests all thought it was wonderful. Afterwards all the participants had a knee’s up in the forward dining room so a good time was had by all. By 1am everybody was in bed again, as this morning was a sea day and then by 11 am the approach to St. Maarten started. The wind was still blowing strongly and the North Atlantic swell was increasing by the time that we entered the Anegada passage (West of St. Maarten and Anguilla) and that me made glad that I selected a port on the South side of an island in the lee of the wind and now also the swell. The sun was shining and all was going to be well in the world.

We approached St Maarten from the West by sailing along the South Coast until we came to Groote Baai at 11.15 am where we picked up the pilot. In the days before the cruise ship docks, we used to anchor here with the HAL ships. I remember many an occasion that I was standing on the tender platform and got drenched by the swell while trying to get the guests off the tenders after the wind had suddenly picked up. Those were the days before TV in the cabins and CNN and the only weather advice was coming from the Telex and the Weather Fax. The latter was the exclusive domain of the captain and quite often us as junior officers did not even know what the weather was going to be like during the day. Most captains did not share information back in 1981 and we only found out during the call that a squall had been forecast and that provided proof of the forecast.

Those days are gone and now the deck officers know exactly what is going on. Weather charts and emails are hanging on the bridge and each morning we have our Bridge Team Management session to prepare and discuss the next port. Thus when we approached the dock area everybody was well briefed about what to do and when, the only anomaly was what the pilot was going to advise. He brought some un-pleasant news with the fact that there was a ground swell running along the pier. This would cause the ship to ride along the dock with the inherent danger of breaking ropes. Indeed we saw that the Carnival Victory who arrived at 08:00 had already broken a few ropes. Best plan was to back in, so the swell would hit the bow first and lift the stern last and go as far in as possible. 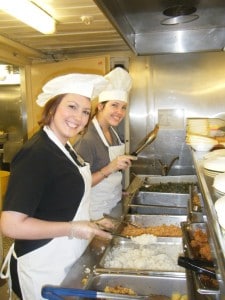 Ladies from the Ocean Spa in an more unusual role.

Using the features of the C.V. as a countdown, I stopped the bridge wing at their gangway level and then the Chief Officer ran his mooring lines as long as he could, so that these lines could take the surge of the ship gradually over the whole length, instead of coming tight abruptly due to the short length and break. As scheduled we were docked at noon time and all guests could stream ashore and enjoy the beach, the shopping village and the tours. I had set my sailing time for 21:00 hrs. as it would give the guests the chance to stroll in the Caribbean moonlight and the officers to finish their Christmas dinner before we sailed. These are all yearly traditions that we like to adhere to and where every crewmember looks forward to. First the officers serve the crew and then it is the otherway around. 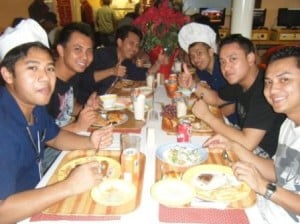 Christmas Dinner in the Crew mess.

Before that, the crew had their Christmas dinner and it is a tradition that they are served by the officers. My specialty is then to man the Bar and dispense free drinks. As the cost goes on my business account, I might as well be responsible for running up the bill. As the dinner takes palce between 4 and 6 pm. we only serve soft drinks but that does not mean that I normally “sell out” quite fast. About 300 crew rotates through the crew mess in 2 hours and that means that the serving officers run shifts in order to help out and still to be able to do their own work. 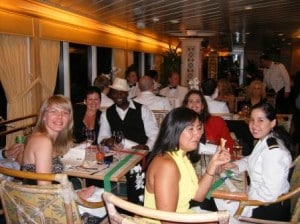 Officer Dinner in the Lido Restaurant. Members of the photo and shop staff enjoying their christmas meal.

That worked all out as planned. We did not break any lines, the turkey was well cooked and sail away was very scenic. Around us were numerous mega yachts, either at anchor or at the dock getting ready to receive their respective owners, something we can always see the signs of, due to the frantic cleaning that goes on.

We will be in Gustavia, St. Barts tomorrow and I am a bit concerned about the weather. The winds are supposed to be stronger than today and there is rain predicted and that normally means even more wind. All will be revealed by 07:00 when I will move the Prinsendam in position. 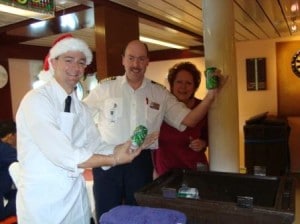 Free Drinks for all. To the left Human Resources Manager Mike Willock, who made all the photo’s, me at my best and Lesley still steamed up from serving hot food.