It is becoming monotonous but again my first action of the day was to check the weather forecast to see how this “Cape Hatteras special” was developing. Especially, how far was the wave field going to come down towards our course line. Well it did not look that good. We were going to have a bit of fun during the coming 24 hours. Based on the projection of the next 36 hours we would have to sail through the 4 meter field. These 4 meters are the significant waves which mean the average wave height. Thus there will be lower waves but also higher single waves in-between. The good news was that my course change of yesterday would keep the ship out of the 5 and 6 meter regions. As already explained that was as much as I could do without loosing too many miles. Based on the swell chart, the waves were going to hit us in the mid to late afternoon and it should last until tomorrow afternoon. I am writing here constantly of waves, as those cost me the most speed and also the most inconvenience for the guests.
However waves are generated by wind and wind we had as well. Lots of it. 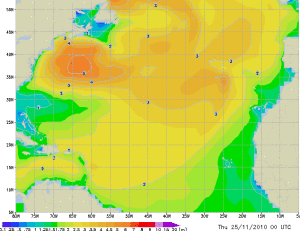 The weather system moving our way. The ship is sailing in the lower right part of the (reddish) system in the yellow area.

By 8 am. there was a NNW wind force 7 to 8 blowing almost straight against the ship and that already slowed the ship down by nearly a mile. The low swell that had been with us for the whole time, added another mile to it and suddenly the Prinsendam was not going that fast anymore. I could only hope that the “plus” I had been building up in the past few days, would be enough to cover it. The strong winds brought another problem. The Fancy-Fair which the Cruise Director had planned on the Lido deck for today. He had been in and out of my office each morning, during the last few days, trying to find out what the weather would be and now the wind was showing up about 6 hours earlier than expected. Thus his whole fancy fair had to be moved indoors. 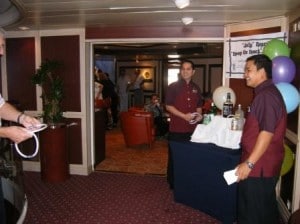 This whole happening is one of the unique specials of the Prinsendam. Each Hotel sub department sets up a game station for guests to participate in. BLD has toss rings around bottles (hoopla), the Front office did Limbo dancing, Cruise staff whale racing, the Ocean spa “toss a ball”, the store rooms had “hit the tin can”, the casino had dice throwing etc etc. 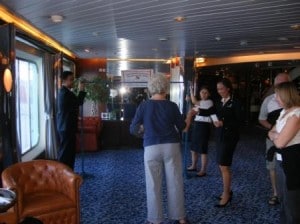 I offered a copy of my 125 year Holland America Line book and the guests had to guess the number of pages. To participate; all the guests received a number of “Appie bucks” (Appie used to be my nickname in my junior officer days) and the face of yours truly adorned the dollar bill where normally Lincoln would look at you. 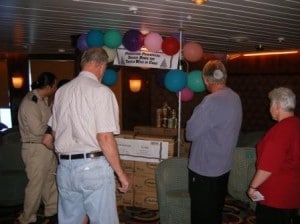 If the guests won games, they would walk away with more ”Appie bucks” than they had paid for the game and at the end of the one hour fair, the one with the most Appie bucks accumulated, would win the first prize. Also one lucky guest would win the book. (In the end one guest guessed 438 pages and it was 439………) 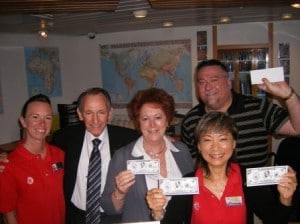 The shorex team, together with the ships commodore and a guest who got lost in the shorex office, showing off the “Appie bucks”. Legal tender only on the Prinsendam.

All in all it was a great success and nearly everybody participated, except the bridge players; but bridge over rules everything. A lot of them are so dedicated that they play “with the knife on the table” and nothing will come in between.

So while the guests played, the captain worried and then made his un-appreciated announcement that it was going to be a long and very wobbly night. Until 3 am tomorrow the waves will be full on the bow and the ship will pitch. It looks like its going to be fairly long waves and means that the slamming will not be constant but intermittent. Then the swell pattern is supposed to move to the North as we will be at that time passing south of the center and then the waves will cause rolling. Hopefully the rolling can be fully counteracted by the stabilizers.

By tomorrow lunch time things should then start to look up again.