By 3 am. the swell direction did indeed change and then came from a more Northerly direction. So the pitching of the ship accompanied by the occasional banging changed into a more “swaying” movement. Officially it is called rolling, but it did not really do that. The ships stabilizers kept the Prinsendam nicely upright but occasionally a large wave would lift the whole ship up and moved it with her, until the wave rolled away from the ship and the ship would return to its normal position. It gave a sort of a swaying feeling. When the ship then returned to a normal state the bow would dip into the waves and occasionally slam. The issue with this movement is; that there might be prolonged periods of a steady ship in-between. Then there is suddenly this sway, followed by a slam and then it is all quiet again. If the ship has a constant strong movement the guests can anticipate it and prepare for it. With an occasional sway without a rhythm that is much more difficult. Thus I made an announcement at 08.30 to advise all around that this swaying would last into the early afternoon. Reason to be careful and not to be “swayed” into false confidence because of the irregular and long delays between each sway. 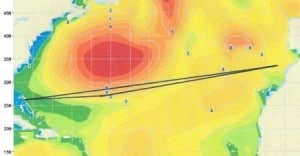 The weather system that bothered us today. The dark centre red is about 8 meters of swell, yellow is about 2 meters. The top black line was the original course, the one below the deviation made to avoid the worst. We just skirted the 4 meter swell line.

By late morning, the swells started to abate quite quickly and for the remainder of the afternoon we only had the occasional pitching movement to content with. The sun shone brightly and those who decided not to take an afternoon nap could have an enjoyable time on the outside decks. As we are sailing in the lower latitudes even bad weather is not cold weather and the noon temperature hovers around the mid to high 70’s. We are now getting closer to the North American continent and Bermuda is now closer to us than the Azores. We will not come closer to Bermuda than about 300 miles but it is the nearest island until we approach the Bahamas.

Just off the coast of Bermuda is the Sargasso Sea. This is a wide stretch of North Atlantic with vast areas of floating sea weed or kelp that grows near the surface of the ocean. When the weed dies it is carried away by the ocean current and the surface wind and by late morning we saw large swaths of brown weed coming by. A natural phenomena that each sailor has often seen and takes very much for granted.

What is also nearby, not seen and which should not be taken for granted is the “North Atlantic Garbage Patch”. Each ocean has a region that is called a Gyre. Here the water goes around in circles, caused by the currents passing by on all sides. Something like a slow turning whirlpool. Scientists have now found out that a lot of the plastics that float around in the North Atlantic get caught in this North Atlantic Gyre and then start a never ending rotating movement inside the gyre system. More and more plastic is brought in by the currents flowing by and eventually it becomes a garbage dump; in this case called the North Atlantic Garbage Patch. The patch is estimated to be several hundred of miles across and is supposed to have a density of over 200,000 pieces of junk per square kilometer. Due to the size of the area and also due to the small size of each piece of debris it is as of now not an option yet to send a ship with a large vacuum cleaner and suck the whole area clean. Maybe that will be come reality in the future. For now scientists keep sweeping the area and counting pieces of debris; mainly plastic, to review if the patch is getting bigger, smaller or remaining the same.

From our ships nothing goes overboard anymore, since we have the zero-overboard-policy, which was implemented about 15 years ago. So not much of a contribution there. The only exemption are the food stuffs from the kitchen and even that is not that much as our Executive Chef is a real wizard with figuring out how much the guests will consume on a daily basis. Also the system that we have with “a-la-minute cooking” e.g. preparing when the order comes in, reduces food waste very much to the minimum.

By the evening the ship was really quiet again and the last two days of our crossing should be really smooth again, with good sunny weather on top of that as well.