It was a nice day, although it started with thunder and lighting and clouds that emptied a considerable amount of hail stones onto the ship. Luckily it lasted only a few minutes and then the frontal system was past and the skies cleared. Good timing as well; it cleared the ship from the salt and it was early enough in the morning to avoid guests being affected by it. Although a few guests, having breakfast on their balcony’s, had a wet surprise. Maybe we should install a little red light on the balconies. If it is on, it will indicate to stay away from the outside as wet surprises are on the way. My first chore of the day was to check my weather charts again and this time the picture looked a bit ominous. As expected Cape Hatteras was producing the next storm system but there is a fair chance that it will get pushed downward into the North Atlantic Ocean by the one but last system that is slowly moving towards the Hudson Bay. It looks like it that Cape Hatteras is sending system one straight across, then a system up north towards North Canada and that system is then pushing system number three to the south before it can hitch a hike on the jet-stream which propels it east towards Europe. The un-answerable question for now is, how far will it come down towards us and how much will it deepen in intensity. That will dictate the strength of the wind and that again will dictate the height of the waves. 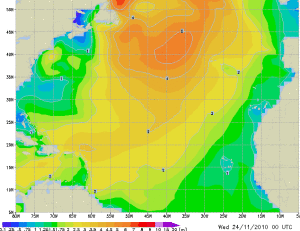 The yellow moon shaped wind area in the almost top left corner is where all the North Atlantic depressions start. The wave height goes from dark blue to dark red and we are sailing in the yellow area at the moment about 2/3 down on the chart and nearly in the middle.

The only thing to do was to wait for the next update coming in around 10 am. (1200 GMT) and that indicated that there was indeed a tendency to come south. We have a subscription with a Marine weather tracking company that we call SPOS. They send on a regular basis forecasts to our ship and, if appropriate, with the advise to deviate. This time their prediction was completely in synch with mine and thus we changed course a little bit to the south. If the weather system now keeps moving according to this prediction, then we should stay outside the 5 meter / 15 feet of swell line. I cannot deviate any further as then the miles that might be gained, would be less than the extra mileage needed to accomplish it. We have to come in through North West Providence channel as further to the South there is not really a suitable opening through the Bahamian Banks. The challenge is now to make as much mileage as possible, go as much in the plus as possible and hope that it will all balance out, when we reach the wave field.

That worked well for the day, as the seas were quite smooth, with maximum heights observed of no more than 8 to 9 feet and only a gentle breeze. With the sun shining brightly it was a very nice day. That day was filled with several official items and the most important one was the “gathering of the most honorable Society of Master Mariners”. That is quite a gathering on the Prinsendam, as with our following nearly everybody is a mariner to start with. Holland America has the highest repeater guest rate in the industry and the Prinsendam the highest rate of all the HAL ships. This cruise it is somewhere between the 85 and 90%. That 5% are the ones who do not return any questionnaires or who for some reason are not yet in the HAL database.

Still it meant; two luncheon’s in a full dining room and a medal party in-between which we had to do in the Show Room at Sea as the Explorers Lounge was too small for the numbers. I normally attend the 2nd luncheon and of course the highest medals are placed at my table. This time 4 of 700+ and 2 of 500+ days.

In between I made at 1 pm. my Voice from the Bridge announcement, where I had to announce the unpleasant news that by tomorrow evening, it would get wobbly again. With strong to gale force winds starting tomorrow morning as the bad weather system will gather strength during the coming night.