We were lucky today. There was no wind. When the Prinsendam arrived at 07.00 hrs. in the morning there was just a small ripple on the water and that was just what we liked. As mentioned yesterday the dock is perpendicular to the prevailing wind, which comes all the way from the north and when it hits the Island, it even increases a bit more when it funnels down the mountain range. Many a time did a cruise ship have to abort docking as the wind simply blew it away.

Then anchoring is always an option but Mykonos town is far to the south of the dock and the bay is large enough for the wind to whip up the waves. And that brings us to the discussion, do we dock or anchor? When we dock we need to use a 10 minute shuttle bus ride into town.   When we tender, we land our guests directly into down town, which is more convenient but for that they have to endure a very wobbly 10 minute tender ride. So what is wise?  10 minutes in the bus or 10 minutes in the tender? For me it is simple I prefer to dock because at least I avoid the challenges with getting a lot of very mature guests safely in and out of a rocking tender. 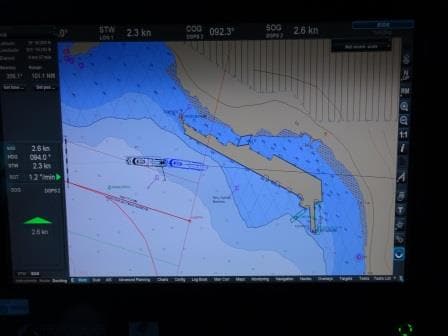 The docking maneuver is quite simple here. Approach from open sea: put the brakes on and pull the stern in.

And today we could do that. We docked with no wind and even when we left there was not that much wind either. The pilot had been predicting South Wind force 6 but maybe that was in his back garden as we did not see it.  The pilot here comes on board more out of habit than out of necessity and this morning he hopped on board about 2 minutes before the ship docked.  There are no navigational challenges here in Mykonos, apart from the wind. So while the captain started his Master – Pilot Conference the Staff captain was already docking the ship. We only needed the advice from the Pilot to say exactly where he wanted us to park.  As the pier is also used by ferries, that is an important thing to know.  Also we were expecting the ms Minerva (formerly Swan Hellenic) but they decided to go to anchor and tender in. 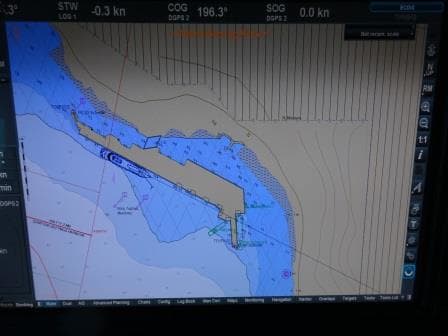 And that was what the Staff Captain did. Put the brakes on, on time and pulled the stern in.

When I came here the first time in 2001, I asked if a pilot was compulsory and the answer was, we can get you one, but he has to come from the mountain and he does not want to. Well if a pilot is not compulsory then I do not use one and we went happily alongside without one. I was then also lucky that there was no wind blowing. However I was quite curious why a: a pilot lived on top of a mountain and not close to the sea and b: why he did not want to come down the mountain and make a bit of money. It turned, he had a goat farm on the top and it was the lambing season so he did not wanted to leave his goats behind. Later on he called the ship and told me he had been following me with his binoculars and I had done a fine job of not hitting the dock. ………….Always nice to get a compliment. 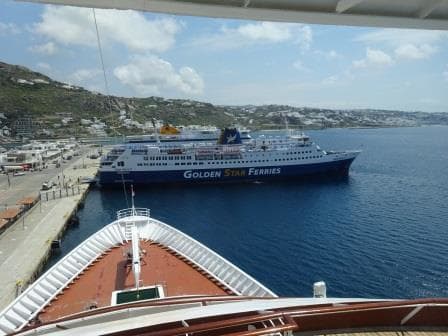 Mediterranean Style of docking. More ships can now use the same dock than otherwise would be the case.

The Ferries dock stern to the pier (Mediterranean Style: bow anchors down and stern ropes ashore) to get the cars in and out via the Stern Ramp. That means that when they dock they do not have not much issue with the wind. For reasons unknown the port authorities do not like it when cruise ships want to do that as well. It requested this once during a windy day as it would mean only a very short tender ride to the little port behind the cruise dock, instead of the bumpy ride to down town. But the answer was no and thus I had to go to the anchorage outside Mykonos and tender into the fishing harbor/the old city.

I spent my day involved in trainings and drills again and executed an unexpected “Bright Star” drill. More about what that is tomorrow.  We left nicely on time to sail for our next destination, Mamaris in Turkey, just around the corner. Although the Greeks and Turks are not the best of friends, they have to live together as some of the islands are only a stone throw from each other and belong to one or the other, all mixed in.  The plan is to dock and that will be interesting as I have never been there.