Lesbos is a rather large island and Mytilene is for island standards quite a big town. As a result it has a reasonable size harbor with two ferry docks. The only problem for us was that the draft allowed in there is a maximum of 7 meters and the Prinsendam goes just a little bit deeper. Also the ferries were running and thus even with the correct draft we might not have been able to dock. As a result we anchored today and had to run a rather wobbly tender service due to the incoming swell. Still we made it while we have not been so lucky in the past.

On arrival we had a bit of excitement as we saw the Greek Coast Guard sailing towards the port with a boatload of Refugees or Illegal Migrants depending on what you want to call them. These were not coming from Africa but from Turkey, although looking at the ski color I suspect they had travelled via Turkey to get into the European Community that way. At the moment there are migrants /refugees everywhere and the Coast Guards of Greece, Malta and Italy pick them up by the hundreds every day. Libya is collapsing, things are not going well in Syria and other areas of the Middle East and 1000’s are on the way.  I could not make sense out of this group though as there were no families; only males and all in roughly the same age group of between 20 and 30.  Let’s hope that this can be resolved in the near future but it will take some courage and creative thinking from our political leaders. 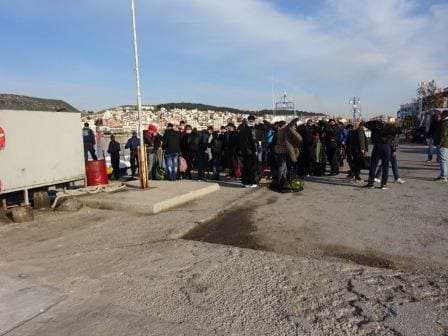 Rescued migrants being processed by the Greek Coast Guard on the shore side.

I saw them coming ashore as I had taken the first tender over with the Security officer to see the town as I had never been here. Both times when the Prinsendam was scheduled to call here I had to cancel due to the swell and wind and sailed over to another island. There are plenty of them around and I just asked Shore Excursion which one they wanted. The locals are quite used to it and normally they can organize a local tour with sufficient Buses in an hour or two. Just the time the ship normally needs to get to the location of choice. And as long as that location is on the leeside with the wind compared to the original destination then I am a happy camper. 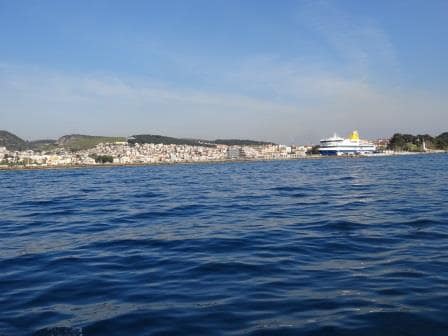 Mytilene Port with a Inter Island ferry at the dock

I went over early as I had to be back on board by 10 am. The Chief Engineer had asked me if I could give training about Confined Space Entries.  The Chief is about to embark on an inspection program of the tanks and that can be very dangerous. If tanks have not been opened for a while, or even for a short period, then there is normally a shortage of oxygen in the tank. Without oxygen we cannot live and thus we have to follow very strict protocols to ensure that it is done safely and if we go in with 5 people that we also come out with 5 people.

There are still casualties occurring in the shipping Industry with these tank entries and often multiple fatalities when a second person sees that something is wrong and also hops into the tank.  Scary business. So today we did the theoretical part; how the permit works, what to look out for and how to adhere to the protocols all the time. Then we did a table top; on paper we simulated how we would enter a tank based on the safety requirements. Tomorrow we will do a practical drill about how to safely remove a casualty if something should go wrong.

Tomorrow we are in Mykonos.  This place has a lot of windmills, indicating that it can be very windy here. In the summer the Etesian winds blow straight over the island. Good for the windmills not good for us. The dock is built fully perpendicular on the wind and thus we need a calm morning so the ship can dock. Otherwise we have to invoke plan B; going to anchor.

Today it was mid-sixties in Mytilene, so a big improvement from yesterday. Mykonos is supposed to be the same.