Before we start with today’s adventures I want to share a special photo with you; a view of the Prinsendam seldom seen. Yesterday in Varna somebody operated a Drone above the ship on arrival and then published a series of photos. I have copied below the most interesting one.  It shows the Prinsendam just docking alongside the pier with the bow and stern thruster churning up the mud due to the shallow water. 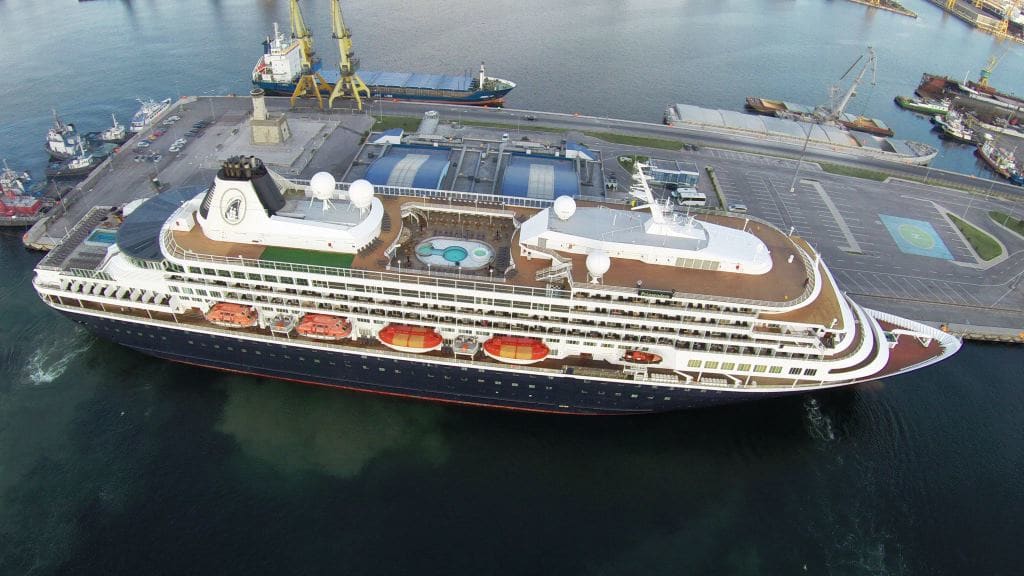 Aerial Drone view of the Prinsendam. Taken by an unknown spy. (Courtesy: via Capt. Tim Roberts)

We spent the day sailing southward. This morning between 07.00 and 10.00 hrs. we sailed through the Bosporus again. Although it was a bit overcast with rain in the distance, it was a clear day and all the sights came nicely into view. By the time it started to drip, we just cleared Istanbul and entered the Sea of Marmara.  What was also nice was that the outside temperatures are going up again. Once we were in the shelter of the mountains range which guards the North side of the Bosporus the temperature started to climb. 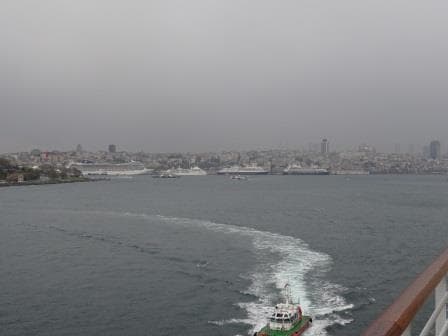 Istanbul is becoming a more and more an important cruise port and today it was a full house again.  We saw the Saga Sapphire, two ships from Silver Seas, an MSC ship, an Oceana ship and an Ile de Ponant ship (not visible in the photo) I still remember the good old days, when the arrival of a cruise ship in Istanbul was an important happening and the captain feted as the “messenger of good tiding’s”.  Now it seems that we just one more Tourist Bus parking ourselves alongside. Luckily for the guests it does not make much difference. In a way it is even better as more guests mean a better infrastructure to process the tours.

We went along all day with the sedate speed of about 10 knots. No reason to hurry as we can easily make Lesbos on time but also because the Dardanelles are closed during the day. Today is the National Holiday commemorating the first assembly of the Turkish Parliament, when Mustafa Kemal Atatürk founded modern Turkey and established the democracy which still endures. That happened on 23 April 1920 and all sorts of celebrations are taking place because of it. While we came down the Bosporus, every building was adorned with a Turkish Flag and from one bridge hung a flag which was close to the size of the Prinsendam. Only the mosque’s seemed to have been exempt from this outburst of patriotism.

One of those festivities involves the Turkish Navy doing things in the narrow part of the Dardanelles and for that reason the waterway is closed until 20.00 hrs.  Thus the captain is aiming for a Dardanelles pilot time of 19.45 hrs. and by the time the pilot is on board, it should be 20.00 hrs. and the Navy should be finished partying. It will mean that we will sail through most of the area during the dark. But we saw it in daylight going northbound and going through at night is also interesting as most Monuments are very well lit. In a way the guests now get the both the options in one cruise. At the same time it is Children’s Day which is also a very important event in Turkey. Something that very few other countries have. Mother’s Day, Father’s Day etc. etc. are more established but Turkey has also a day dedicated to the children.

This closing for one day causes quite a bit of upheaval in the shipping business. All day long we passed ships going very slow or going to anchor as they have to wait until the pilots can catch up with the back log.  Being a cruise ship we have the luck that we are able to bypass all these ships as we get preference. Firstly; as no country wants to have bad publicity and secondly if the cruise ships would be delayed then the cruise company’s might decide to cut out a call at Istanbul around this time of the year.

With so many cruise ships calling at Istanbul early in the year it would cost them a lot of money. So we get preference, can keep our schedule, and in return we will continue to sponsor the locals in the Tourist Industry.

Tomorrow we are in Lesbos and will be anchoring at the main port of Mytilene. We are too big to go into the port and thus we will run a tender service. The weather is looking good and now we just have to hope that the there is no swell which might complicate the proceedings. It is also supposed to be sunny and that might mean a warmer day.