Today we visited Varna which is the most important port on the Bulgarian Coast. Again we are docked here in a cargo port although they now have a Cruise Terminal. It was opened two years ago and the Prinsendam was the first ship calling at it; before it was even opened. 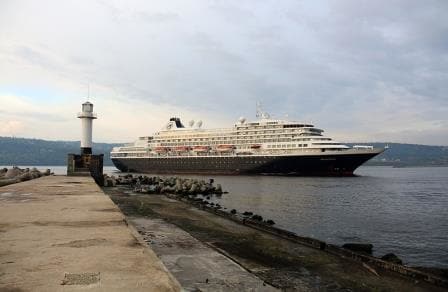 Before this terminal was built the cruise ships would anchor and tender into the down town area. However at that particular call the seas were too rough and the intention was to cancel the call. Somebody was in the port quick in thinking and said, come inside and dock; regardless of whether it has been officially opened or not.  I have seen that different in other parts of the world, where something was ready for use but could not be used because it had not been opened officially.

The weather today was cold again but the sun came through on occasion and it remained dry. It gave the port however a very grey and stark look and an impression as if it was still hidden behind the Iron Curtain. Luckily an attempt was made in livening things up by having a part of the inside of the port breakwater painted with a continuous running mural. As it was haphazard in places I suspect it was more graffiti than an official commission but the quality was quite good.

The company laid on shuttle buses to cover the 20 minute distance to the town Centre but most guests were back fairly early and were not very excited. For some Varna was the chance to mark another destination of the bucket list and not much more.  This does not mean that there is nothing to do; you just have to look for it a little bit.

Also here the Romans have been leaving their mark behind with 2nd century thermal baths. Then there is the period when Bulgaria was part of the Kingdom of Romania and one of the Queens had a summer residence here.  The most important building in the town is the big Cathedral of the Holy Assumption where the choir performs if you are part of the (HAL) tour.  Most unusual I think is the visit to a 50 million year old Petrified Forest where you walk among the now – turned into stone- old trees. Two guests I spoke to had taken a cab to see the Aladzha Monastry which is a complex of caves where monks have been present from the 5th. century onwards.

I stayed on board taking more crew through their respective areas of responsibility during emergencies.

One of those groups was the Housekeeping department. Most of them are Cabin Stewards and they have the difficult task of moving the guests to and from the cabin during the 3 alarm cycle. When the 2nd alarm sounds, all guests have to go back to the cabin and prepare for whatever might happen next. The Cabin Stewards have to ensure that everybody puts on warm clothing, a life jacket and that nobody forgets their medicine (Plus their 2nd pair of glasses and spare batteries for the hearing aids). Then when the General Emergency Alarm goes, they have to guide them towards the lifeboat station by keeping them on the right hand side of the corridor. This to avoid colliding with late arriving guests who still have to collect their life jacket. Then they have to help the guests with Special Needs. Rollators, wheelchairs, scooters, oxygen etc. etc.  It makes for a very busy duty and it has to go fast, organized and without causing any panic, and for those things we train.

We left Varna at 5 pm. and are now sailing south again. Tomorrow between 8 and 10 we are scheduled to transit the Bosporus, sail through the Sea of Marmara and arrive in the early evening at the Dardanelles.

The weather is to remain cold but dry and hopefully it become a bit warmer when we are between the Greek Islands again. Our first Greek Island will be Lesbos and I am looking forward to that one, as I have never managed to get there. Thus far I always had to cancel as the swell was from the wrong direction. Keeping my fingers crossed.