Last night just after 7 pm. we entered the Black Sea and then all shelter from the cold wind fell away. So today, even in the sunshine, it was cold. An optimist put in the daily program 12o C / 53oF but that was probably an observation made out of the wind and with the door closed. The locals call this weather already summer so I really do not want to know what winter is like over here. Still a lot of people seem to be able to deal with it as Constanta is a big place. It is the 4th. largest port in Europe after Rotterdam, Antwerp and Marseille. As a result we are docked at a location which is surrounded by ships. To our port side we have tankers and a shipyard. A lot of through traffic from river barges and to our Starboard side there is a large Navy base which occupies most of the large breakwater which protects this port from the Black Sea which can be very nasty in the winter. From the Bridge we could see the City in the distance but not as we had in Istanbul where we were almost parked inside the Souk. 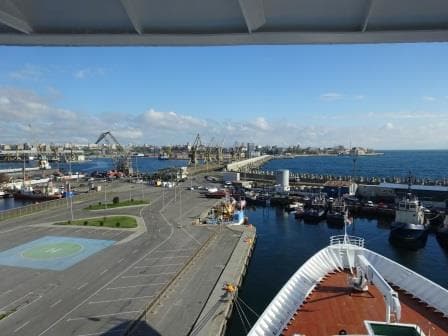 Constanta in the distance on a clear sunny and cold day.

For the guests there was luckily enough to do without having to be exposed to the elements all the time. Constanta or Timos as it was called in the olden days has always been an important port. When the Romans arrived they renamed the port after the sister of Emperor Constantine the Great. Her name was Constantianain but that does not really lay easily on the tongue and so eventually it became Constanta or Constanza in the Western version.  After the Romans came the Ottomans and then the Genoese, followed by local governments until The USSR got involved after World War 1. Since the Iron curtain came down Romania has been quickly developing into a very Western State. Because it is more open, we are getting more and more Romanian Officers in our company. Navigators, Engineers but also in the Hotel Department such as our Guest Relation Manager, who was a really happy camper today as she could finally show her family what she did on board. 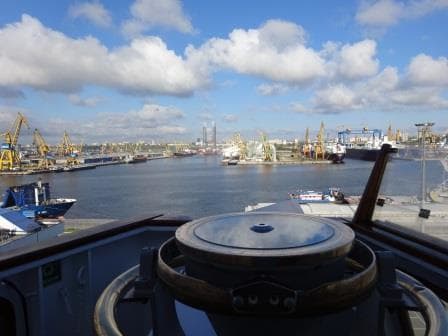 The larger part of the cargo port with in the middle a shipyard.

With this cold weather I had no intention to go out and I spent the day giving Refresher Trainings to various groups of crew. Normally this stuff is done by the deck officers but it is beneficial if an outsider comes in occasionally and brings a new angle to what has become a boring routine. Target audience today was a group of crew which we call the Pax. Sweep Team. 16 Hotel crew under the leadership of the Asst. Dining Room Manager are responsible for clearing the Public Rooms during an emergency. When the 2nd of our three alarm system is sounded (the crew alert alarm) all guests are supposed to go to their cabins, prepare for lifeboat stations, and then wait for further orders. 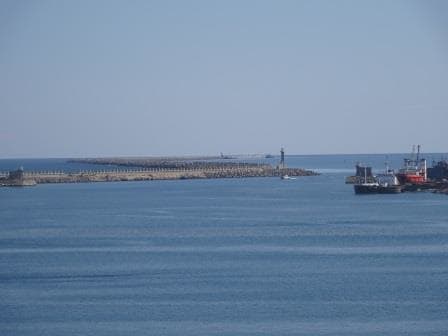 This is a big breakwater. A large and massive outer pier and then after a narrow entrance another large area. No problems for making a sheltered approach.

But not all the guests follow those instructions immediately. Some can still be found asleep in the Library, not willing to part with their food, or simply not appreciating the urgency of what is going on. For those stragglers we have a Passenger Area Sweep Team. Four crew members per deck who check all the public areas, including rest rooms and anything else that might be unlocked and their duty is to shepherd those still present to their cabins. The job of going through the areas is simple enough; with a diagram in hand they can find all the places they have to check. To deal with guests who do not want to budge (I will first finish my Steak !!!!!!!!!) is another matter. For that they get taught Crowd Control and Human Behavior tricks so they feel confident in dealing with such a situation.  After they get used to the concept, most crew enjoy the idea that in an emergency they can order the guests around and achieve the goal of helping out with a 100% compliance at the lifeboat stations.

For the crew area’s we have a similar team, made up from Kitchen personal and those I will see in a few days’ time.

Tomorrow we are in Varna, Bulgaria further up the coast of the Black Sea, and it is supposed to be even colder than today.