We woke up to a very sunny but very chilly Turkish morning. The wind was blowing from the North and as it is still winter in Russia, it caused a chilly day in Istanbul. But cold winds keep the air clear and thus we had the best scenery you could think of.  Although our location might not have been that great in relation to getting off the ship, it could not be beaten for the view. We literally had the best seats in the house.

For those who were going ashore, there was a small shuttle bus between the ship and the terminal and on the other side of immigration, there was another shuttle bus running everybody into town.  Behind us, one by one the cruise ships left and by the time we sailed only the MSC Opera was still there as she had a two night stay. Using the system of one day in port for the guests who were leaving, then a changeover day and then a day in port for the new guests.  We pulled out at 17.00 hrs. to sail north through the Bosporus. As tomorrow we are in Constanta, Romania from 0800 to 2100 hrs.

Sailing at 17.00 hrs. we could do the whole scenic part of the Bosporus during day light. It is fascinating as during a night passage as well but then you only see the fancy lights but no details.  During daylight there are almost too many details to keep track of it all.  Although most guests do not see and realize it, arriving and departing is an exciting adventure in Istanbul.  The current running through the Bosporus can be quite strong. 3 to 4 knots is usual but it can go up to 7 or 8 knots. Especially in areas where the Bosporus is shallow.  As the Salispizari cruise docks are located in the ebbing bend of the Bosporus (e.g. when the water from the Black Sea goes South it makes a wide turn to the West to get around the corner) the current dictates how a ship docks. Yesterday we were lucky that it was flooding and thus we could dock with the nose towards the city. 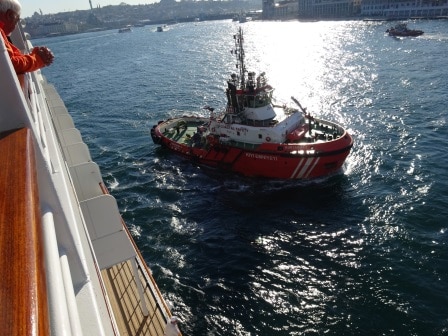 A little help from a friend does not do anybody any harm.

Today on departure it was ebbing and that meant that the current helped us coming off the dock as the water wedged itself in between the dock and the ship but then the ship had to force it around to face north. To play it safe we had a tugboat hanging on the stern to ensure that the ship would come around fast enough to avoid been pushed towards the City. As Holland America has no intentions of opening a Hotel there, the preference is to keep the ship in deep water. 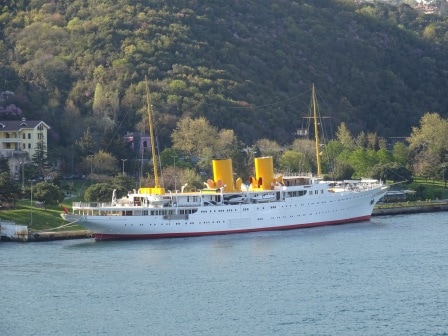 The Turkish National Yacht ms Savarona. Once bought as a gift to the founder of modern Turkey Kemal AtaTurk.

Then it takes about 2 hours to navigate the winding path of the Bosporus until we enter the Black Sea. With a strong ebb coming down, the ships going north keep close to the Asian side of the channel avoiding most of that current. We could not do that all the time as we had to overtake several cargo ships and that meant veering out into the vortex of the current. 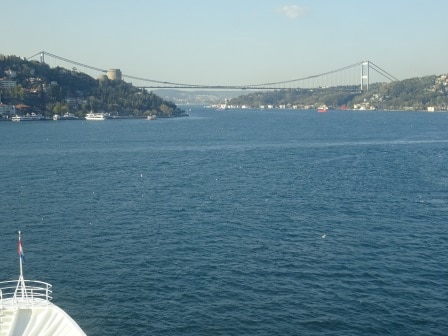 The Sultan Mehmet Bridge with in front of it Romelian Castle.

The most spectacular parts are the two turns in the channel. First to the west while going under the Fatih Sultan Mehmet Bridge and shortly after a sharp turn to the East. 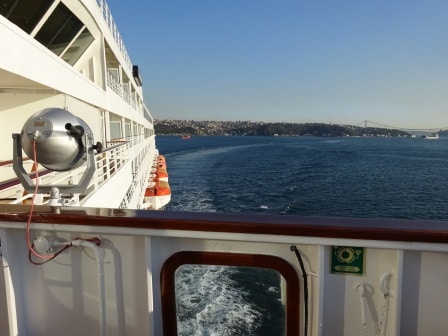 The Prinsendam turning to the West to get around the corner.

In both cases you cannot see the traffic which is coming the other way and because of that the tankers going up and down are not allowed to have any opposing traffic. A normal collision is not nice, an environmental disaster here would be even worse. 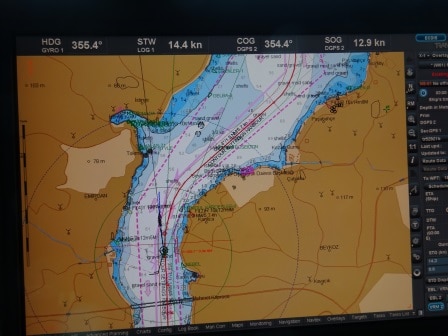 Turn to the right in the Electronic chart

There is also Traffic Control on the shore side which monitors every move of everything which floats. As not every ship is manned with professionals and occasionally very creative moments of navigation can be seen, the people at Traffic Control are kept busy all day long.

Turn to the right as seen from the bridge window.

By 19.00 hrs. we were back in open waters and could say good bye to our Pilot. As the Bosporus is a very busy waterway and challenging with its currents, a pilot is compulsory. Together with this VTS (Vessel Traffic Control) the Bosporus can be navigated in a safe way.

Tomorrow we are in Constanta, Romania for a full day. We have a few Romanian crew members on board and they are very excited as it is not often that a HAL ship is calling here. With these sorts of visits the ship tries to work it in such a way that those crew members have the whole day off to go home, or get “home” on board. Subsequently I rescheduled some of my trainings and that always makes people happy.