And then we had a bit of excitement after departure. A small cargo vessel had caught fire and thus the Prinsendam went to the rescue. Luckily by the time we arrived the fire had been extinguished by the crew and thus the only function the ship had to perform was to coordinate a salvage tug with the local authorities. 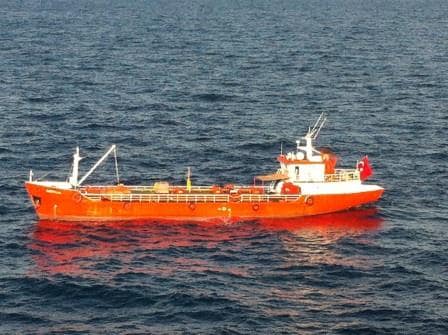 This was not so simple because when the fire started the cargo ship was in Greek Waters. So the Bridge called the Greek authorities using a Greek 2nd officer who we have on board. While this conversation was going on the little ship drifted into Turkish Waters and the Greeks did not want to know anymore. Thus a casino employee was called to the bridge and then she could tell the Turkish locals that it was time for them to do something.  So after a 45 minute delay we were on our way again.

The ship had put on a special Holland America Line dinner by using a menu from the ss Rotterdam from the early sixties. In those days most of the entries were described in French and thus we had that tonight. It was quite interesting to hear the Indonesian Crew taking and repeating the orders in French. Most of them did not, so chicken soup remained chicken soup however hard I tried to get them say: Bouillon de petite Marmite. 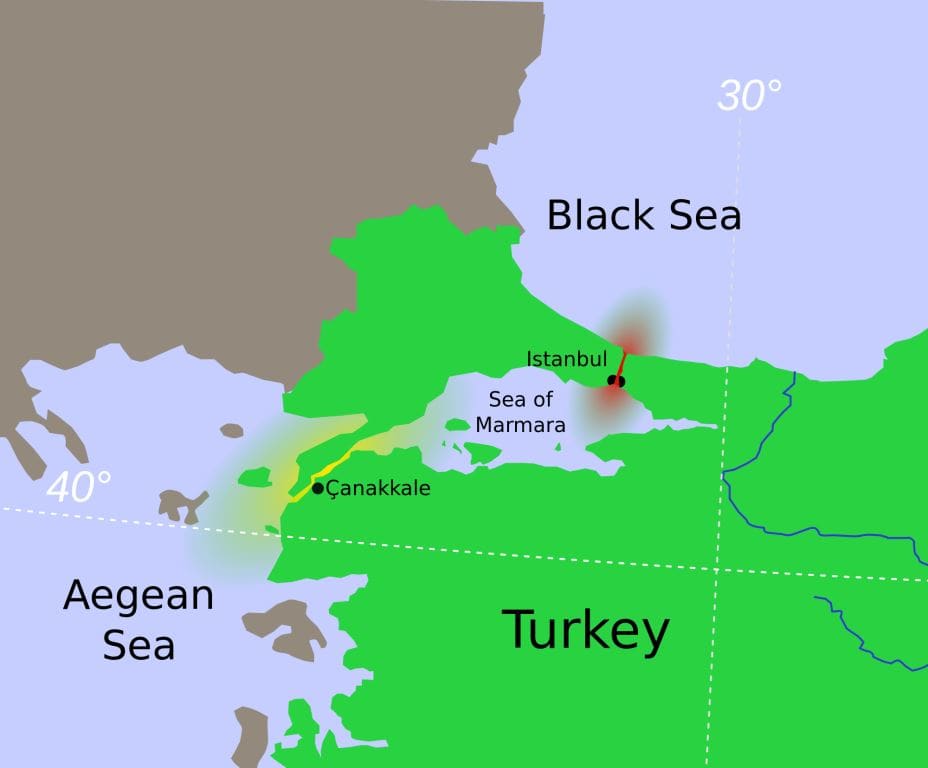 Most of the Monuments are located in the area marked yellow on this chartlet.

The weather for today had looked a bit iffy to say the least but on arrival in the Dardanelles it was dry and the sun rose as scheduled, so the guests had a good look from 06.00 hrs. onwards. We in the Western world tend to think of the casualties sustained by the Allied Forces but the other side suffered as much, maybe even worse and for that side there are memorials as well. 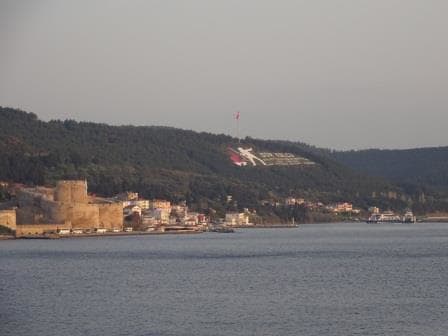 One of the Turkish Monuments laid out against the hill side.

One of them we passed around 0700 hrs.  Luckily most sights are on the left bank when going north and thus the sun shone the right way.

By 08.30 the ship was in the Sea of Marmara heading full speed for Istanbul. We were unlucky in that way, that the wind and the rain started to come over and we kept that until arrival this afternoon at 16.00 hrs.  Due to the cargo ship, the wind and the adverse current, the plans of arriving earlier did not bear fruit. But we still arrived on time. 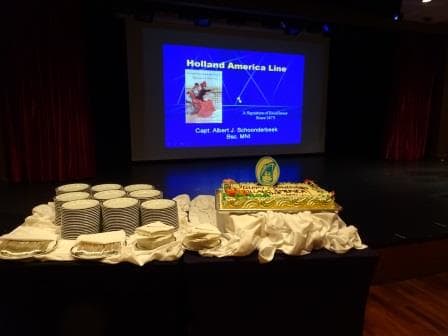 Still nobody had to be outside as yours truly took to the stage to bring 142 years of HAL history in 80 minutes. Everybody stayed but whether this was due to my eloquence or the fact that there was Holland America Cake to be served at the end of it the lecture, is very much open to debate.

Going  by the schedules on line and what transpired from shore side it looked like that we were the only cruise ship in and so it did not make sense that we were sent to a farther out located dock. Not that I minded as I remembered that this dock would put us with the nose looking right at the old city and nothing to hinder our view. And this was indeed the case. While coming in, there were already four cruise ships alongside and we went for the final dock, which is almost on top of the bridge leading into the old city.  Nice to have a drink in the crow’s nest while admiring the skyline of Istanbul. The only thing is, it is a bit of a distance away from the Cruise Terminal and the check in location.

As soon as we arrived disembarkation started for those who had flights booked for the coming night.  Then we are already expecting new guests to board in the course of the evening so it will be a busy evening for the Hotel Department.

My wife is leaving tomorrow and thus we have planned a little farewell dinner in the Canaletto Restaurant on board overlooking the Bosporus. Tomorrow the ship will spend a full day in Istanbul and the weather is supposed to clear going for sunny skies and temperatures in the mid 60’s.