Today we had our first of two sea days which, based on the current weather forecast, should be two very nice days. Apart from the seasonal hurricanes this area of the Pacific Ocean can be very “pacified”. It is located right in between the area’s where the major weather systems are blowing and there are no cold and hot water currents meeting that could make things more interesting. When the sailors of old were talking about the various regions of the oceans, they would give the area’s generic names, based on the latitudes and the winds. Thus they spoke of the “roaring” forties and the “screaming” fifties. For the area’s where there was less or no wind, there was also a specific description. They called it the “Doldrums” and the sailing masters of the past hated it. A ship could be becalmed for weeks on end, if the wind failed to pick up. With the modest supplies and provisions that the ships had on board in those days and the lack of general comfort it must not have been a pleasant situation to be in. Knowledge of  how to avoid the areas was much sought after and of great interest to any maritime nation. 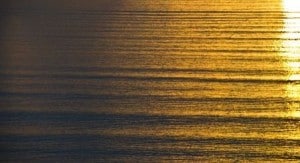 A windless sea with just a long low ocean swell rippling through.

Now we know that this is caused by the Intertropical Convergence Zone. This is a low pressure area around the equator, where the regular winds are very light or not present at all. This low pressure is caused by the heat at the equator. With the air warming up, it rises up into the atmosphere and travels north or south to descend again at the higher latitudes. The sea surface becomes as flat as a mirror and only the swell (waves generated by weather systems long gone or coming in from far away) avoids the surface from being as flat as a mirror. Apart from the Gulfo de Tehuantepec, which has its own micro climate as explained before, we now have had this weather since leaving Puerto Caldera. With an engine propelled vessel that is not much of a problem but a sailing skipper on a tight sailing schedule would not be a happy camper when sailing here. 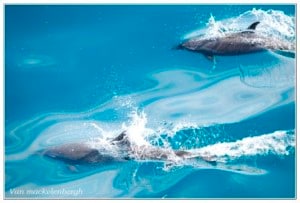 This photo was taken by our Hotelmanager straight down from the deck of the ship today.

Thus we sailed along happily and as it was nearly wind still, the Statendam going along with 17 knots, created its own refreshing breeze on the ship. That gave reason for many a guest to be out on the decks, where they were feted by some spectacular dolphin shows. It is probably not scientifically proven, but the dolphin being an intelligent and inquisitive animal, probably leaps at the chance to have a bit of fun and diversion. So riding along on the bow waves of the ship must be for them, what a fancy fair ride is for us. Plus no doubt they sense the presence of an audience and the chance to “show off” is not to be missed either. Thus the animal world presented a nice show to us today. Brown Booby’s hovering around the bow, dolphins cajoling around the sides of the ship, turtles paddling along, and high up in the air I spotted one or two Albatrosses, or similar size birds, of which I did not even know that they were around in these areas of low winds.

I always like to announce these sorts of things but the problem is that quite often the bird or fish has just disappeared when I have managed to get the guests attention. When I was just starting out as a Junior Navigator, my then captain (A. Hess) told me to make announcements whenever I saw wild life. So I did. However this was on the old Statendam and when I announced whales at 18.30 hrs. in Alaska the whole dining room, located on B deck in the bowels of the ship, emptied out and all the guests (some of them quite mature) climbed the stairs to get outside to see the whales. The Maitre de Hotel let his displeasure be known in no uncertain terms and from then on we had to check the daily program first before grabbing the microphone. First it had to be verified that we were not upsetting any opening hours of the dining room or disturbing the Bingo.

To keep the folks happily occupied for the afternoon, I gave my Holland America History lecture, and every time it draws a full show lounge. It amazes me every time to see that our guests have such an interest in the history of our company. What also amazes me is that each time, there are a few guests who made their first Hal trip a long long time ago, some of them on the old emigrant ships Groote Beer and Waterman and they are now coming back again to sail with us. Tomorrow we have our second sea day and the weather forecast reads: little change. Exactly the way we want it.