The route that we take today is a sort of Cruise ship highway. For all the ships that come and go to the Caribbean, the island of Cuba is very much in the way. And as the Cubans have not yet dug a Cuban Canal right through the middle all ships have to go around it. That means either on the West side (Cabo San Antonio) or at the East side (Cabo Maisi).  As we are coming from Key West and are going to Grand Cayman, we sail around Cuba via the West side. 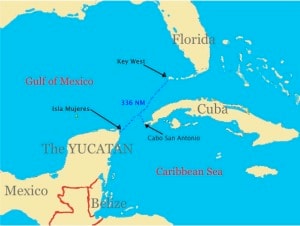 That means sailing all the way against the Gulf Stream which comes up along the East coast of Mexico and then moves into the Florida Straits. That is not good for making speed and thus the challenge is always to deal with the adverse current in such a way that it affects you as little as possible. Option one is to stay right under the Florida Keys as long as possible and then cut straight across, option 2 is to cut across and sail right above the coast of Cuba and option 3 is a combination of the two. It all depends where the axis of the Gulfstream is located. As mentioned in an earlier blog, we have charts that indicate where the Axis was located – recently – and hopefully it is still in the same position when you have to sail through the area. The axis can move considerably in a fairly short time and thus there is always a little bit of a gamble.

That brought us abeam of Cabo San Antonio around 7 am and from there we entered the Caribbean Sea. The current will remain against us, as it is supported here by the Trade Winds, which blow from East to West. Although today there was not much trade wind to be seen as it was almost wind still, courtesy of the frontal system that is now slowly pulling away. It will take a day or 2 before the trade winds are back to their normal strength.

The distance Key West to Gr. Cayman is such that it is too long to do it in one night and too short to really need to spend two days at sea. But if we would go full speed we would arrive around 11 pm in the evening and the night life in Georgetown is not such that it would make sense to do that. Thus we trundle along with a sedate speed so that we have a nice day at sea and then arrive at the decent time of 08.00 hrs. in the morning.

We will be at anchor there as the island has no docks yet. There are plans in development, varying from mooring buoys to a complete dock, but it is a careful process that is applied as whatever decision is being made, it affects the coral coast in one way or the other. Currently the ships are assigned to four anchorages and if there are more ships, then they stay on there engines and drift on location.

However no worries about that tomorrow.  We will be in on a Saturday and that means no other ships. Grand Cayman is mostly frequented by 7 day or 14 day cruise ships and they sail from Florida either on Saturday or on Sunday. Based on 2 days from Miami or Fort Lauderdale means that they can only make it there by Monday or Tuesday.  Thus we will have the whole place to ourselves and anchor at the most convenient spot.

That most convenient spot is anchorage number one as it has the best balance between good swinging room and a short tender distance.   All anchorages rely on the fact that the trade wind is blowing the ships away from the island and the anchor keeps them in place. As there is little wind at the moment it will be interesting to see if the little wind that there currently is will be enough to carry out a regular anchor maneuver.