In the dark of the early morning the Veendam arrived at the Key West pilot station after a breezy night at sea. But the weather did not throw a spanner in the wheel and on arrival at the dock there was hardly any wind. Wind is an issue in Key West, as the houses are barely built above sea level and there is no shelter anywhere in the port apart from those houses and three story apartment buildings. If I am not mistaken, the highest mountain in Key West is about 20 feet above sea level.  There are three docks in Key West, Mallory, Pier B and the Navy dock. All the ships want to dock at Mallory or Pier B, at least the company’s that is, but most captains prefer the Navy dock as it has much better bollards and more of them to hold the ship if a sudden squall comes through. The problem with the navy dock is that it is far away from town and has a long pier so they use those sjoek –sjoek trains there to get the people to the Gate.

Mallory is the most limited dock as far as bollards go, and if there is also a ship at Pier B then the ship at Mallory has to go forward as much as possible, to enable both ships to get their gangways out.  Today there was an Apartment of the Seas at the B pier and thus the Veendam had to move forward. That means that forward there are only spring lines that hold the ship. Some lines you could call breast lines (normally under 90o to the ship) but they were also sort of leading aft. Not nice if you expect a rainy day with the chance of an occasional wind burst. With the ship so far forward, the gangway is laid out in the Marshalling area of the ship (where we load the luggage and the provisions) and thus the guests have to walk through the crew area. Everybody finds that fascinating as you can peek into the crew mess rooms while walking by. We have guards along the route to stop the guests straying to where they should not go and we always have to get a few back on the right track. Some try to stray off on purpose but some just don’t pay attention and happily follow a crewmember who happens to walk in front of them………. and he or she also happens to be on the way to C deck and their Cabins.

The Captains have been lamenting about the lack of bollards along Mallory and B pier for a long time, but not much is happening to improve the situation. There has been for a few years a fierce debate going on about: more cruise ships, less cruise ships, bigger cruise ship, not bigger cruise ships.  It seems that the pro and con groups are more or less in balance and thus we wait for further developments. In the meantime the captains worry about being blown away from the pier during wind gusts. But I do like Key West, I greatly admire the groups of people there who woke up in 1968 and decided to remain in that year and who are very happy with that lifestyle. It must be a serene feeling to have your main concern of the day to make it to Mallory Square on time for the sunset.

I (finally) finished my training class for lifeboat attendants today with the much anticipated exam. I am very happy to announce that all but one passed and that one is getting a second chance. As I am now staying until Nov. 08th. for the 3 alarm system, I have the chance to give a 2nd training class and thus he can have another go at it. 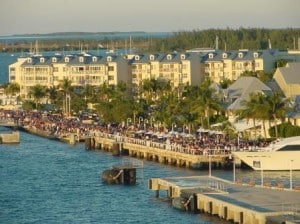 Getting ready for Sunset in Key West from a 2012 photo

Sunset at Mallory Square. Highlight of the day and on occasion a cruise ship blocks the view. To please again both parties (those who want to see the sunset and those who want to keep the tourists in port as long as possible) there is a permit system that allows a certain numbers of stays after sunset. Today there was no sunset as dark clouds were gathering at the horizon but also nobody had any reason to be upset with the Veendam as we sailed at 1600 hrs.

Tonight we will sail SW against the Gulf Stream and then tomorrow we come around the West Point of Cuba = Cabo San Antonio.  There is a large frontal system laying over the Caribe which is bringing all that rain to Key West but it is supposed to start moving away.