One peculiar thing about the courses that we run between Cabo San Lucas and Sand Diego (and vice versa) is the fact that we see so little traffic. There is the occasional yacht passing by but that is it. The main reason behind this is, that just north west of Cabo there are a number of reefs. We stay on the inside of them, as it saves a number of miles on a more direct line to Cabo. For non cruise ships there is very little to do in the Cabo area and thus they take the wider route, staying west of the reefs. Going inside the reefs is not dangerous as there is plenty of water between those reefs and the coast line of the Californian Peninsula and thus we happily sail there. Our courses are being set out in such a way that after we have established the safe boundaries we try to squeeze the mileage to a minimum in order to save fuel and or save time. Most of the time it is a combination of the two with sometimes the emphases on fuel saving and sometimes on time. This time I leaned towards time saving as I wanted to arrive earlier than normal in San Diego. In arrangement with Customs and Border Protection, Port Operations and a whole other number of stakeholders we have a normal docking time of 0700. This time I was asked to arrive earlier as the ship had to go through a few crew inspection. That means that all crew has to see the CBP face to face and that takes place on a 90 day cycle. With a limited number of inspectors available plus the turn around that the crew also has to achieve, it would be beneficial to dock earlier and so I agreed.

Thus we sped away from Cabo San Lucas with full sea speed, all five engines on line and the after burners on so to speak. I had a second reason for sailing away fast and that was the impending swell that was coming down from the Vancouver area. It is fairly nasty there with storm after storm and those storms are sending large wave fields down the coast. Eventually those wave fields also reach the California area and we are heading straight into them. The faster you plough into them, the more the ship pitches. If the height and amplitude is wrong you might even start slamming onto the waves. That is very uncomfortable for all on board and it costs a lot of speed. So by taking off as a rocket, we can build up some plus in the schedule and by the time we meet the wave field, we can slow down to the –by then- average low speed to maintain, ride the waves gently and still be on time at the pilot station. It worked out even better than expected as the swell forecast for the day showed that the brunt of the swell was veering slightly away from the coast, leaving us to deal with about 14 feet of swell by late evening, instead of the 18 first expected. 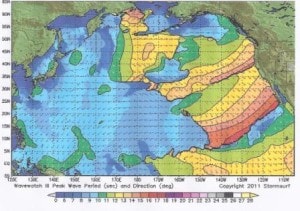 The wave fields rolling down from Vancouver area. By the time the swell reaches San Diego the storm up north has dissipated. The scale goes from dark blue to black, whereby Red is about 16 feet.

By late afternoon the ship indeed started to pitch but by that time we were down to 16 knots to maintain instead of 20. Our average speed to maintain to San Diego is 18.5 knots, so by being 2 knots under makes quite a difference to the way the ship rides the waves. Although we felt the ship pitching slightly until late in the evening it was not troublesome and I think that it did not deprive the guests from enjoying their Thanks Giving dinner. That by itself would have been reason enough to make sure that we could do the final night on the ship at slow speed but in this case I had other good arguments as well.

I will be at the pilot station tomorrow morning at 0500 hrs. for a 0600 hrs. docking. The forecast gives a wind still morning with temperatures in the low 40’s on arrival. No doubt very chilly for San Diego standards, but very good for us as it means that by midday it will peak at the low sixties which is a perfect working day temperature. We are all waiting to see if our loading will finish on time, as traffic is expected to be horrendous today. A regular Friday and black Friday at the same time, and according to the experts downtown San Diego is bracing itself for bumper to bumper traffic. That might have an impact on all the guests arriving on time and the same for our stores and provisions. At least nobody will be able to blame me; I will be early tomorrow morning.