Then just before I retired a nice email came in from the local agent. The captain of the Sapphire Princess had decided to stay on anchorage nbr. 3. The ship had an overnight call and the first day it had been assigned anchorage 3 due to two other, more frequent calling, ships being in. However for the 2nd day, he had the right to move to anchorage nbr 2, as the SP is a lot bigger than the Statendam. He did not and thus I was given the option to move. That gave me the opportunity to anchor a lot closer to the port and so reducing the tender distance considerably; which for our short call helped a lot. The only downside is that anchorage nbr 2 is still exposed to ocean swell and the embarking and disembarking of tenders goes slower than when there is no swell at all. Still it is a lot better that being at anchorage nbr.3 or having to drift outside the marina and hoping that the wind does not pick up. That wind was not in the forecast but the weather forecast at Cabo is seldom completely right and especially the wind can un-expectedly pick up from zero to a wind force four or five, without much warning.

Quite happy with the state of affairs for the day, we approached the anchorage area at 0630 and were ready to receive the authorities for clearance about 15 minutes later. As the port of Cabo San Lucas has recognized that the long tender distance from the ships is an issue, they have arranged for a fleet of local tenders to be available to help out. So the moment we arrived, a whole swarm of little blue and white tender boats came out ready to service us, the Sapphire Princess and also the Carnival Splendor who came in shortly after us. Again to reduce time, the local authorities came out in one of those boats to the ship, whereas in the past we had to send a ships tender ashore to collect them and that took a lot of extra time. By 07.15 the ship was cleared and we were in business; and indeed the only thing that slowed us down was the swell. Not very much you can do about that, as the only option would be to build a breakwater and that is not possible as the depth near the anchorage is over 200 meters.

Due to that depth we anchor on the shelf. Here the sea bottom suddenly rises up from 200 to 70 and then to 30 meters. Then it rises slowly to zero/ e.g. towards the beach for the next half mile. That gives us about half a 3rd of a mile radius for anchoring the ship. Half that radius is over deep water and the other half over the shallows. Nowadays with GPS we can pin point to 3 feet of where we want to have our anchor put down but in the old days with rickety radars and only visual bearings it was not that simple. So in the 80’s when I came here with the old Statendam (4) we would lower the anchor to about 30 meters in the water and then slowly steam in the direction of the land. The moment we saw the anchor catching something (seeing the chain going aft and taut) the captain knew he was there; he would then stop the ship and pay out the amount of anchor chain required. Now I bring the ship exactly in the position where I want to be, with a radar picture coupled to GPS and then we lower the anchor. That makes it possible to anchor exactly on the anchorage locations stipulated by the local authorities. In the past the ships ended up “somewhere near” the assigned spot and of course erring on the closer side to the town to reduce the tender distance. That then gave rise again to complaints by captains whose anchorage area was squeezed by another ship doing that erring.

So today we ran our tender service while dealing with a bit of swell. It was not ideal by normal standards but regular for Cabo standards. Ideally we all should be on anchorage nbr.1 which is sheltered behind the Cape but understandably that spot goes to the ship that calls most frequently. With all the guests on board by 1400 hrs. I turned the ship 180o degrees around to make lee for picking up the tenders on the “swell side” of the ship and by 14.30 we were on the way full speed to San Diego.

Going out we saw the first whales playing around. In the coming weeks their numbers will swell so hopefully we will have some good sightings on our next cruise southbound.

From this radar shot you can see that the three anchorages are fairly far apart. That has been done because of the un-expected winds that can come up from any direction. Then the ship will stretch behind the anchor and might then come too close to the other ship. In places such as Grand Cayman the ships anchor much closer together but there the wind is nearly always from the same direction. (The little dots under the ships are the tenders, and near the edge is the cape of Cabo San Lucas) 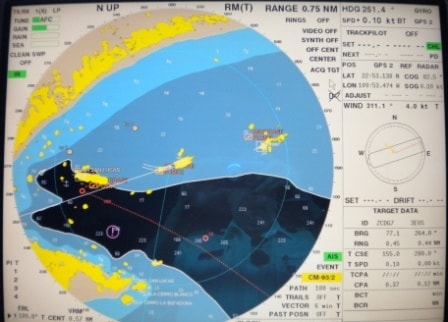