Willemstad is blessed with what I think is the best port in the South Caribbean. It is also the largest one, with a big sheltered internal harbor, created by the combination of the “Schottegat “and the”St Anna Baai”. 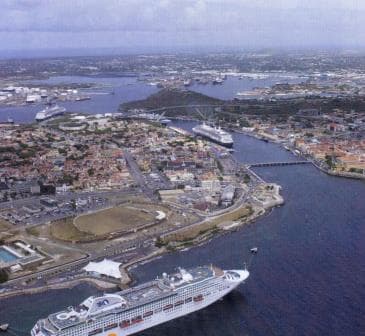 Almost All the cruise ship berths occupied. Two Holland America Line ships inside the harbour a Celebrity ship tucked away under the bridge and an RCI ship at the Mega Pier outside.

Because of this natural advantage the island is also economically further developed than the other islands. Apart from the Refinery which you also find on Aruba and Bonaire, the other two Dutch islands nearby, there is a shipyard and a lot more industry. It does not have to survive on oil and tourism alone, courtesy of having a deep and large harbor where many ships can dock at the same time. Sailing in, then swinging around inside either during arrival or departure and then sailing out again is a nice thing to do. Especially if it is an evening departure when you sail through the lit up houses on either side …… very close to those houses as well, as the fairway is not that wide. 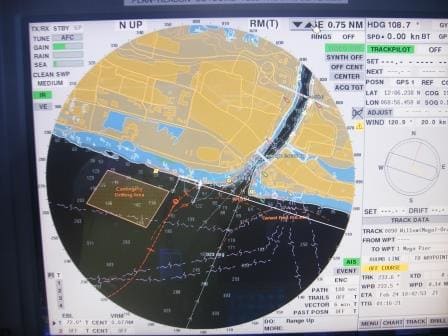 As you can see the entrance is quite narrow and a challenge for a high-out-of-the-water cruise ship on a very windy day,

But this was not the case today. We were the only ship and thus we docked at what they call the Mega Pier. It is not so Mega big but large enough to accommodate all the large cruise ships which do not easily fit inside the harbor. It would be nice to go inside but it is time consuming and the mega pier is a much better dock to moor at.  Today it was very windy and I would have been quite reluctant to have gone into the entrance, certainly in the early morning.  For the approach it is not such a big problem as the current is against the wind but about 300 feet from the entrance the current becomes a counter current, in the same direction as the wind and then it is less pleasant if there is lot of wind, like today. Especially if they want you to dock at the berth right inside the entrance. Then you have to put the brakes on as soon as you come in and that is a rather unpleasant maneuver. Luckily Captain Ryan did not have to make that decision; we were going to the Mega Pier.

Because the 3 Dutch ABC islands (Aruba, Bonaire, Curacao) are so close together, we always stay a late night in one of them. Going to the next one is barely 5 hours sailing, with a sedate speed, and thus we can have a late night stay. For this cruise it is Willemstad but I have stayed late in Oranjestad (Aruba) and Kralendijk (Bonaire) as well. Because of the late stay we see more guests taking longer tours, as there is still time to explore the town, or to shop, even if it is a full day tour. There are no full day tours on Curacao, it is simply too small but we see quite a few guests doing a morning and an afternoon tour and then on return wandering into town or have themselves dropped off in town on the way back. 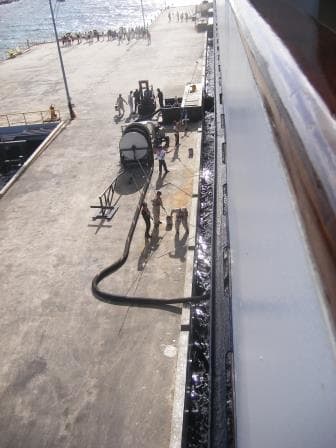 Regular cruise ship day. Bunkering fuel and the sailors touching up the hull

For the ship it was just another port day, except that we were refueling as well. Willemstad has a Refinery and that lowers the price of oil. There is not any cruise ship company who will let a bargain slip by. With the refinery close by, there is no need for a Barge or Tank trucks; the pier is connected directly to the pipe lines system and the ship can simply hook up.  The oil is pumped with sufficient pressure at source and thus there is no need for a noisy pump on the dock and it results in a very quiet bunkering evolution.  Good for the guests on the dockside and even better for the guests in the nearby cabins.

My afternoon was spent with rigging up one of my elaborate drills. Building a small section of a ship’s hull from wood with two big holes in it. Simulating a breached ship’s hull with the option of lots of water coming in. That “lots of water” being supplied with three fire hoses on the other side of the wall. Tomorrow morning, there will be the challenge for the Emergency Response Teams to plug off a broken gas pipe which threatens to create a gas explosion, to save two casualties with gas inhalation and then to plug the holes with wooden beams, steel covers, plugs, wedges or whatever they deem suitable as we have it all in our Damage Control Inventory.

Tomorrow we will be in Oranjestad (Orange City), Aruba, and will dock in the port which listens to the name of Paardenbaai (Bay of Horses) although I have never ever seen a horse there.  We will be the only regular cruise ship in port apart from the Freewinds but that is a private undertaking of the Scientology Church.

The weather will be the same as today: how could it be different as Aruba is barely a stones throw away? Warm and Windy.