The port of Oranjestad is really more a sort of coastal rim or beach which was eventually built up, than a properly constructed port, as its existence is fully due to the natural protection from a reef that lays in front of it. That together creates a natural harbor where the reef protects the port from the worst of the ocean swell.  This protected rim of the island has been changed into docks and they form a barrier between the water and the town itself. There is a Container / Cargo Dock, then several docks which are multi-purpose and then the docks A, B, C and F which are mainly dedicated to the cruise business. Dock C and F are the closest in walking distance to the town as for A & B people have to double back to get to town as they cannot walk straight off the Pier at location A/B as there is water in between. 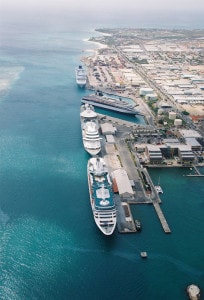 Full house in Oranjestad. Terminal C is where the 2nd large ship is docked.

We were the only cruise ship today and dock C was reserved for us. If there are more ships, then the berth assignment depends on size and arrival and departure time. Smaller ships can fit in Berth D,E and F, as long as they do not stick out but the bigger boys have to go on A,B, or C and sometimes even have to overhang using the bow ropes going onto the dolphins.  I never like to be at Berth A, as it is a long walk back to the Gate for the guests but also because on departure it is very short distance from the dock to the exit of the harbor and you have to make speed quickly to make the turn. With the S class ships it is not such a problem as they have Becker Rudders which steer extremely well as long as there is flow over the blades.

However in the past when I came here with the old Noordam, Nieuw Amsterdam and Rotterdam berth A was not so nice as those ships needed to build up speed before sufficient flow would go over the rudder blade to steer and a safe turn could be made. If I had half the chance I would let the N ships drift back halfway down Dock B and then charge forward. With the Old Rotterdam we would normally hook up a tugboat for this turn as a steam turbine ship needs time to gather momentum.  The old Lady liked to Waltz, she did not like to Jive very much.

Oranjestad has the same current flowing past the entrance as Willemstad and when the ship sails in from the North West, there is a leading light to help steering against the current and to stay exactly on track. Once inside it is a matter of slowing down at the right moment and finding a good course to avoid the ship being caught by the strong Trade Winds which blow almost unhindered over the low island. They have a mountain called the Hooiberg (Hay stack) which rises steeply out of the landscape but for the rest the island is flat. (Or is it a hill ??, as I saw a movie once which claimed that a hill has to be a 1000 ft. high before it can be called a mountain ?) 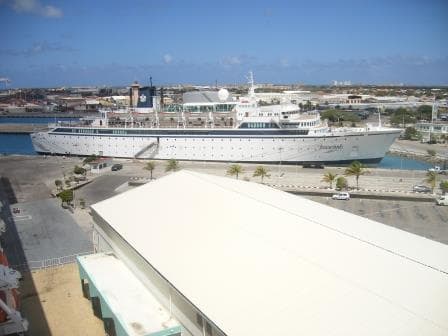 ms Freewinds ex Boheme. Note the sloped flat stern which was once the Garage Door for the Cars.

Next to us in Berth F was the Freewinds. Nowadays owned by the Scientology Church and it potters around a bit in this area. We see it sometimes in Bonaire and sometimes here. I do not know whether it is a cruise ship for that church or a training center or maybe both. What I do know is that we are looking at a piece of Cruise History. This ship, then called the Boheme for Wallinius Lines, can be credited with starting the modern cruise business from Miami. The original concept was to run vacation – take your car cruises – to the Bahamas. That was not that successful so they welded up the car deck and it became a regular cruise ship and then it all started rolling. NCL showed up, followed by RCI, followed by Carnival and the rest is history. All back in the good old days of the late 1960’s. She is now 47 years and has been owned by Scientology since 1986. From the outside she looked in very good condition, so if the inside is the same, she might last for a long long time to come.

We had a long stay yesterday in Curacao; today was only a half day call, as we have a long distance to travel to make Grand Cayman on time. Tomorrow will be a sea day and Georgetown will be our final port of call on the day after.

Guests can now start worrying about how they are going to get all this stuff that they bought in the suitcases they brought on board which were already too small when they packed them. But the weather is going to be very nice. Sunny with following winds, creating a gentle breeze on the decks.

My day will be filled with debriefings from the various drills I threw at the ship and the sailor trainee’s will be excited as they will have their theoretical examination.