Today we sailed from Aruba towards Grand Cayman,with the wind on the side and the swell three quarters on the stern. The latter can be a bit annoying as the ship tends to move then. Rolling a degree or so on occasion. We have the stabilizers going full out but they cannot cope with the elimination completely due to the angle.  For some reason all the ships with a square or semi square stern (and that is all the modern cruise ships) have this issue that if the swell catches the ship under this ¾ stern angle there is some rolling. The swell on occasion comes under the stern and as it not straight under the stern, it cannot make the ship pitch and as it is not full on the beam, the stabilizers cannot completely deal with it. But the swell lifts or pushes the ship up at just the wrong location. Only the Prinsendam in our fleet which has a very rounded stern does not suffer from it.

If you have ships with a duck foot (that is a sort of spoiler on the water line at the stern), you get the strange movement that sometimes the ship seems “to hang & stay” on one side for a prolonged time before it comes back to straight up.  So modern ship design for all its improvements, has also introduced a few new quirky behaviors in the ships.

A duck foot is a flattened part sticking out from the stern over the water. It can be installed to improve stability. If you increase the width of a ship at the water line, you get a better margin to survive if the ship would take on water.  Or you can use it as a spoiler which presses the ship down on the water and thus reduces the fuel consumption as it optimizes the direction of the flow of propeller wash.

When you do practical drills on the ships it nearly always consists out of three parts.  1. The objectives for the drill: what do we want to achieve?  2. The execution of the drill according to the objectives.   3. A debrief: did we achieve our objectives during the drill? What went wrong, what went right, what can we do better next time. 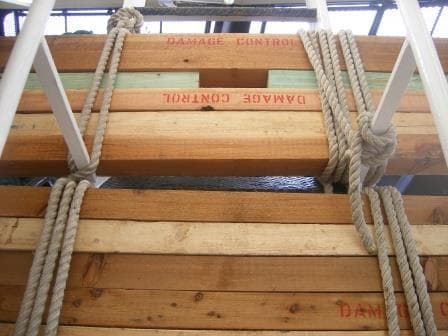 The ships hull with two cracks

In Aruba we held a damage control drill, with the objective to close of two holes in the hull through which water was coming in.  The focus of the drill is to first make the area safe and then to have the teams brainstorm about what material to use and how to plug the holes to such an extent that if they cannot be closed completely, they can be sealed to such an extent that the pumps can easily deal with the still incoming water. 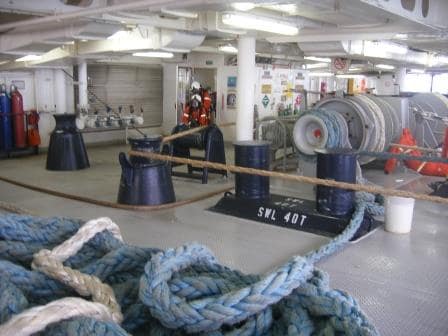 Initial attack = is the area safe

We exercised the drill accordingly, with the mockup I had built on the aft mooring deck and it all went well. The engineers showed great skill and insight in carpentry so if they ever decide to leave the ship…………. there will be a future.  When it comes to Damage Control it is the engineers who take the lead as there is steel – construction – involved and pipes and fluids. Plus most likely if we would have ingress of water, it would be in the Engine Spaces. 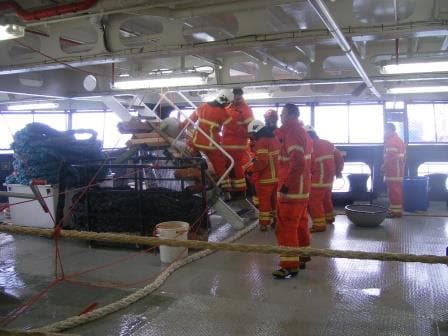 Area is safe, scuba gear comes off and we are hammering away

When it is above decks, outside the technical spaces when it mostly involves guests areas, the deck teams take charge as the needed routines might be closely linked to moving guests around and other disciplines which might be guest related. However when an Emergency is called, all the teams are in the same attack mode together, until it is fully clear under which expertise the issue can be resolved the best. 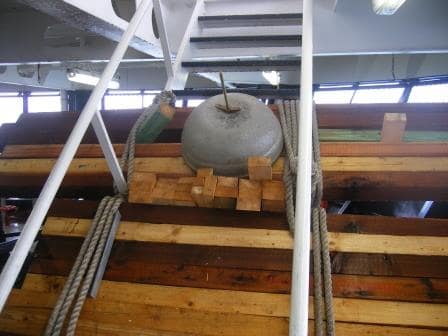 20 minutes later all the holes are properly closed off. The ship is safe.

Tomorrow we are in Grand Cayman and that is a tender port. To prepare for that evolution the Life Saving Officer calls the whole deck department together for a Tender Briefing. This is a gathering in the Bo ‘sun store where by means of a Power Point, the tender route is described, where the tender will dock, Navigational issues, Traffic that might be encountered, Weather, etc. etc.  This ensures a proper operation of the shuttle service and then the only thing that can really go wrong is either mechanical or weather related.

We should be arriving at 08.00 in the morning and then have the shuttle service going shortly after. The weather should be typical for the day, breezy with showers in the area. The only thing is, the wind might be S.E. instead of North East and could mean more swell at the anchorage.

For those who do not know what to do: Grand Cayman has over 600 banks who are registered there and thus have an official brass plate on one or the other official door and that is already worthwhile to have a walk around the town for.