Although the ship was in port overnight and the gangway wide open for the whole period, most guests came back on board for a good night’s sleep and then got up again very early for the next set of shore excursions. The Colonnade Restaurant (Comparable to HAL Ships Lido for breakfast and lunch operation although they offer A La Carte as well’) opens at 06.30 on port days but it looked as if they had torn the doors down as half the Restaurant was already full when I arrived at 06.31 hrs. Last night it was very quiet in the ship and I felt really important as I had the whole Club Lounge to myself including the Band. Some guests joined later but when I left the crowdedness of the lounge reduced again by 20%. Still a few people were on board during the day as not everybody participated in tours on both days. For just going ashore, without a cultural goal, Haifa is not as spectacular as due to the curved nature of the port, it lacks a concentrated down town area. So it is not as ideal for a concentrated shopping stroll as might be the case in other ports.Today was drill day again, the last upheaval I caused was seven days ago and then the law requires another upheaval to keep the crew proficient in their safety knowledge and routines. Today we had a fire drill in the engine room where we simulated a fire in the portside main electric propulsion motor followed by the reporting and cabin clearing routines to get everybody to their lifeboats. 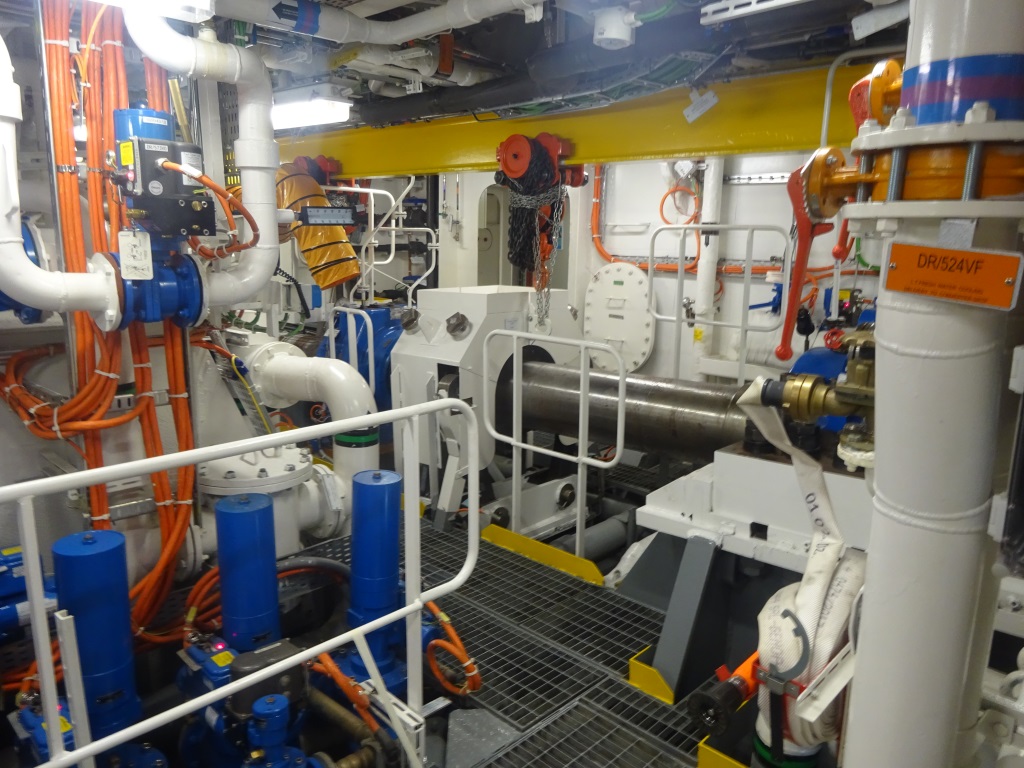 The Portside propeller shaft which is connected to the Propulsion motor we put on ()simulated) fire today.

All these drills are the same on every cruise ship and the vastness depends mostly on the size of the ship. Here on the Seabourn Ovation you simply do not have to walk as far. But the routines are the same.  I normally test the readiness of the search parties by putting a few crew members in the ship that have volunteered as Drama Queens or are very good in simulating a broken leg or just like being confused. Question is then, are they found, are they taken care of and are they escorted to medical or safely to their mustering station? Our routines always achieve the objectives but sometimes it happens in an around the houses way of getting there. That often has to do with the way crew speak their languages. They are all proficient in English but when they come across an unusual situation then the way of describing the situation can be very interesting. A simple example is the English/Philipino Expression: “Already Not Yet”.   This means that they have not done it yet but plans or actions are in motion to achieve it. But if a Russian hears this, then it translates into YES . NO ……. So what is it that is meant, and what message will be filtered out of this and passed on???  And all those glitches we can only iron out by drilling, drilling and drilling and then reviewing with the teams involved what exactly happened and what can we do better.

View of the Main Engines in the AFt Engine Room. Not ,much to see as all new engines have nowadays have top covers to isolate heat and to protect them from undue outside influences.

Today a few pictures and some information about the Engine room. The Ovation is just a small version of all what the bigger ships have, as everything, legally and economically is nowadays standardized. Thus the ship also complies with a Safe Return to Port requirement; which means if one engine room or a complete vertical zone burns out then we can still get home with the other one and we still have operational capacity to produce meals, toilet facilities and Air conditioning only a bit more limited. 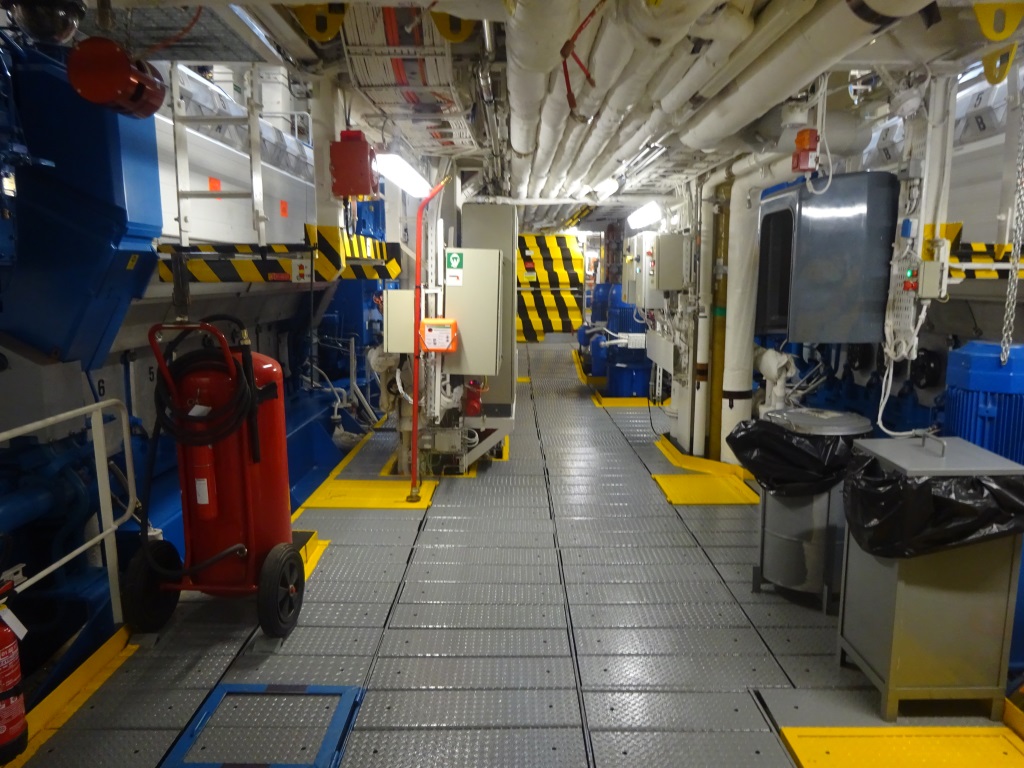 A look through from the Main Aft Engine Room towards the Propulsion Rooms.

Therefore the ship has 4 main engines located in two completely separated Engine rooms. These are Sulzer Diesel 12 Cylinder 4 stroke V angled (12V 32D) motor engines which are connected to two Electric Motors that turn standard fixed propellers. Each engine can produce 5700 KW. The Ovation does not have Pitch or Azipods but fixed screws which turn the other way when the captain pulls the handles astern. The new Seabourn expedition ships will get Azipods. Then there are two aux. engines of a 1000 KW each. for aux. power in port, but they can also let one of the main engines run as it is all Diesel Electric. The ship has two rudders and then two bow thrusters and two stern thrusters for going sideways. In the top of the funnel there are two Emergency Generators which provide power in case all the engine rooms would burn out or flood. 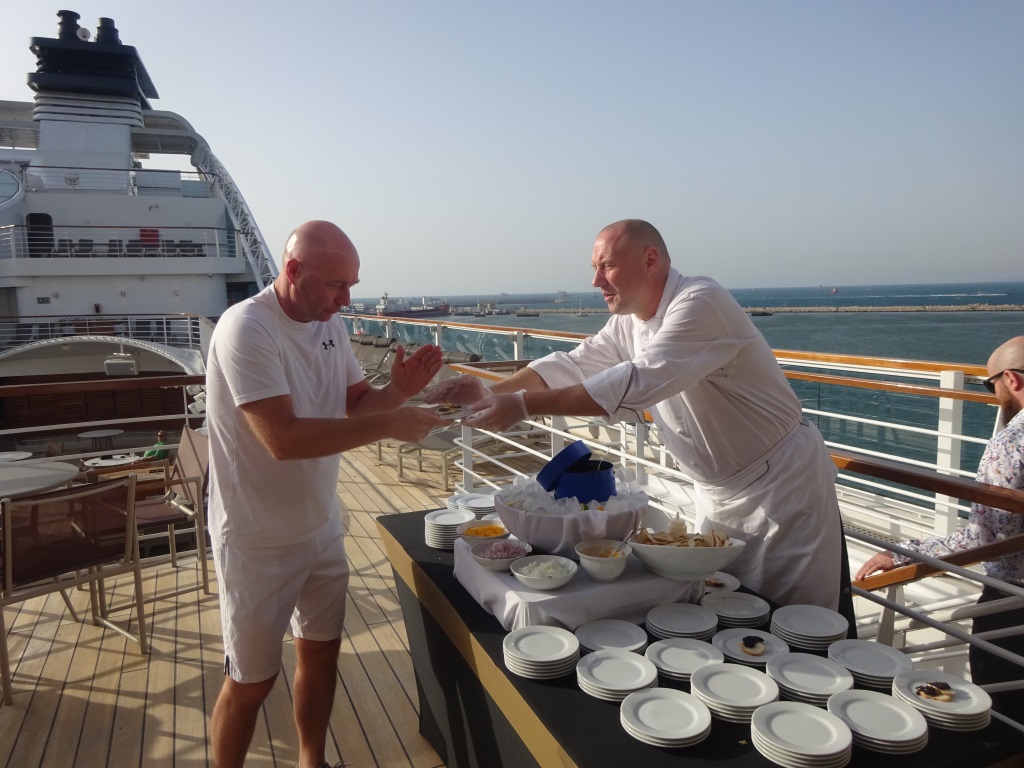 What do Guests do when they are back on board ?. Seabourn invites them to sail away with caviar. Here the Executive Chef is busy with handing out the goodies.

Tomorrow we will have a sea day and then we are in Santorini. Unless things change, we are there with only one more ship and thus it will not be so busy when going ashore. The distance to travel is 550 miles and that means we can do it with a speed of about 15 knots. And that is good as the wind is supposed to be against us and the faster we go the more bumps in the road we could find. But it will be sunny with temperatures reaching 24oC / 75oF in the afternoon. 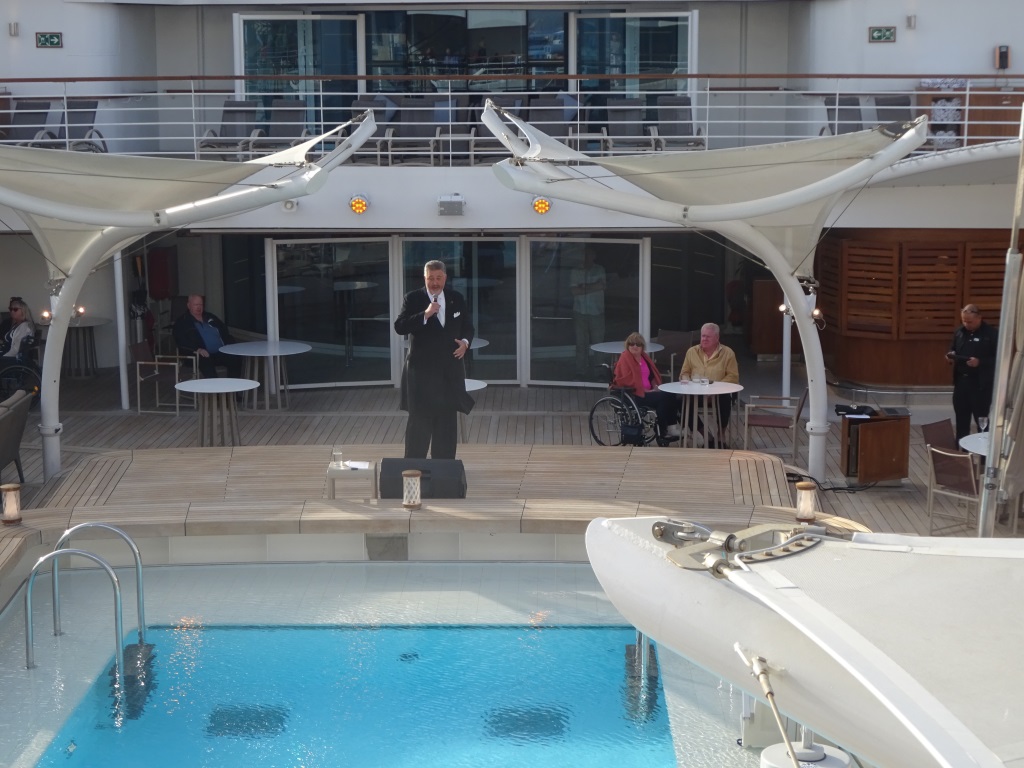 And what do you do when munching caviar?. You listen to a smooth singing Welsh tenor with light classic and musical songs.