Today we have a sea day as we are on our way to Santorini. The distance is 550 miles and that we cannot cover in one night so we are having a relaxing day at sea. And this time I can say this as the daily program does not feature any wild activities. One can be mentally and physically exercised if one wishes so but it is all spaced out and doable. The earliest activity was a remembrance service of ANZAC day this morning at sunrise and although the ship is small there was a good number of veterans on board to attend. As the crowd on board is very international it was amazing to see that the attendee’s also represented the whole scala of “Allied Forces” who were active in the wars and not just the Australians and New Zealanders for whom this remembrance days is specially meant. It was a real “Brother and Sister in Arms” gathering at sunrise. While this morning was the remembrance part this afternoon the ship will organize a get together for some reminiscing with a good glass of wine in hand. 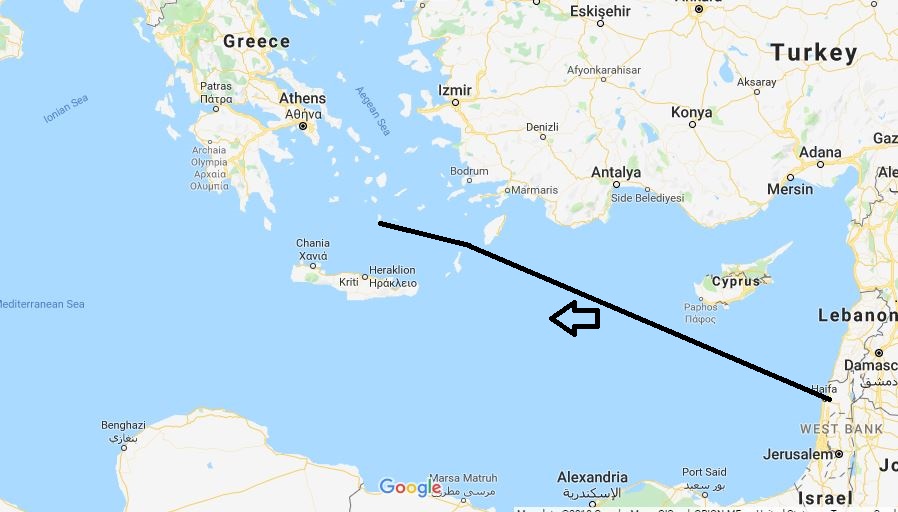 Our route to Santorini. Sailing under Cyprus and Rhodos / Rhodes belomgs in a string of islands called the Dodecanese Islands. of which Santorini forms part towards the western edge of the group.

We are now in the Mediterranean which is of the same water height as the Red Sea and that is why we could do the Suez Canal without seeing any locks. All the salt water in the Med. comes from the Atlantic Ocean at Gibraltar or through the Suez Canal from the Red Sea. The surrounding areas, especially the European continent, provides fresh water which also comes down from the Black Sea area. As the Med is not draining out, nor getting higher and higher, there is current. But because the sea height is in balance on both sides (Gibraltar and Suez) the currents are not very strong.

It is more a gradual replacement of “old” water by “new” water. Different levels of salinity/density create flows, islands in the middle of the Med. form obstacles and the Sun and the Moon are doing their best as well but the sea surface area is really too small for a successful gravitational pull of the two. Thus what we mainly see in the Med. Is a slow flow of surface and deep water current which bounces off the land it encounters and then back –eddies on itself until it can follow a main stream flow again.

A visualisation of the Med. currents by NASA (Thank you for borrowing) The lighter colors indicate surface currents. The more blue the deeper the flow. You can clearly see the influence of the Atlantic and the Black Sea.

Thus on board ships, the currents are not considered that much of a focus point unless they are augmented by strong winds. Such as the Mistral near Marseilles or the Etesian Winds blowing down from mainland Greece. Then the weak currents can get good boost in one direction or the other but mainly those currents are in the same direction as the wind that causes them. Unless that wind has just disappeared and then you have to be ready to expect the un-expected. I have seen that happening at the entrance to Piraeus harbor where the wind was gone but the ship, while approaching the port, entrance which is not very wide was still set off its course line.

On board nobody was having any idea about these musings by the ships navigators as the focus of the guests was on the contents of the HERALD, the daily program on board the Seabourn ships. As I mentioned it is not loaded overfull but a number of activities still offered here have sort of disappeared from the large ships, but they are still standard practice with Seabourn. So we have hosted Bridge, a guest art exhibition (we had a needle point teacher on board this cruise), hosted Baggo &, Golf putting, Dance class and other cruise staff games. Three lectures today followed by Shorex destinations AND who can afford to miss it, the Galley Tour. And the Seabourn Galley is much larger than one would expect from this size ship.

Tonight is formal night (but only required to wear the full gear in the dining room) and then there is a performance of Sir Tim Rice. Those who are in musicals will know the name, as together with Andrew Lloyd Weber he was responsible for a whole slew of mega hit musicals in the 1980’s.  And they are still played in the West End in London.  Evita, Jesus Christ Superstar, The Lion King etc.etc. The Herald informs me that he is still involved in these projects and has written new songs for the Lion King movie that just has premiered in Cinema’s.

We are approaching Santorini from the East and thus we have to sail around the Volcano Crater as both entrances are on the West Side. The captain is a happy man, as the Etesian winds which can blow very strongly here from the North have decided to take a day off and it should be nearly calm. And that is good, because we are together with one other ship, and that is a bigger one, so she will be anchoring on the “hump” the only shallow spot in the whole area. 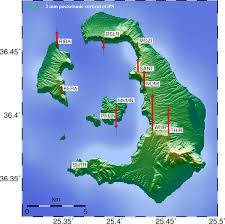 We will be approaching from the West as the main part (the inhabited part) is on the eastern rim of the Volcano.