After a slow sail from Ashdod to Haifa we arrived at the pilot station at 06.30 and sailed in shortly afterwards. Haifa is located against a curved mountain ridge which tapers off towards the sea. The top of the ridge is called Mount Carmel. The mountain is well known from biblical days as the location where the Prophet Elijah challenged the local competition to settle the problem of who was the true God. 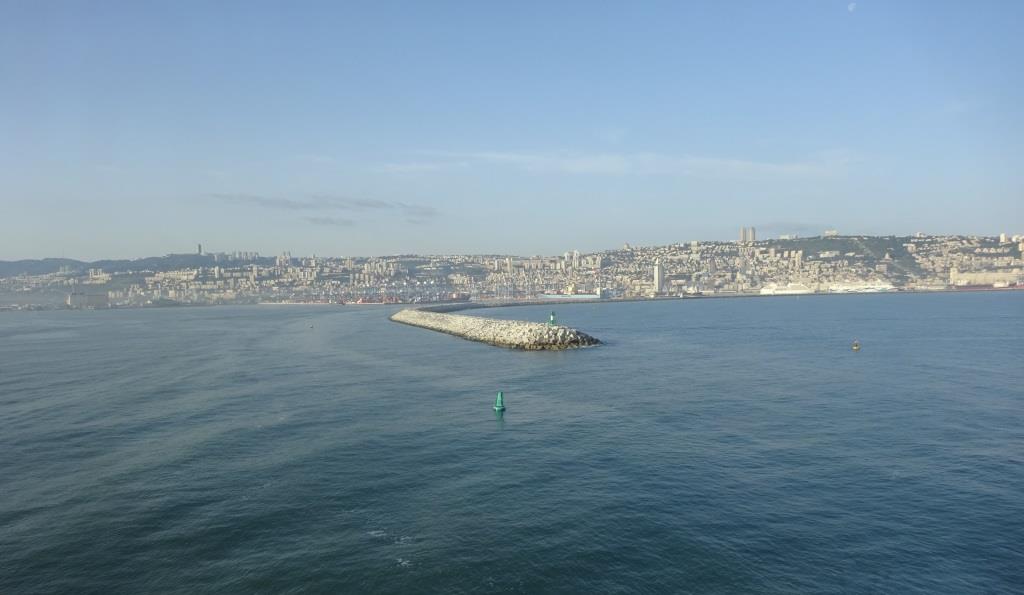 The port of Haifa as seen from the pilot station. Haifa is mostly located against the Northerly ridge of Mount Carmel.

The mountain has a very long sloping curve and that created also a curved harbor (not curved enough to be called a crescent but by no means straight either). Thus there is more space for ships and docks and also the option to make a long protective breakwater to keep the swells out. And the locals have built the curve full of docks, another very busy port. The breakwater in Ashdod was not able to keep all the swell out and there we had a little bit of swell running even where we docked.  But here in Haifa they must have applied more modern science and the breakwater is doing the job the way it is meant to be. 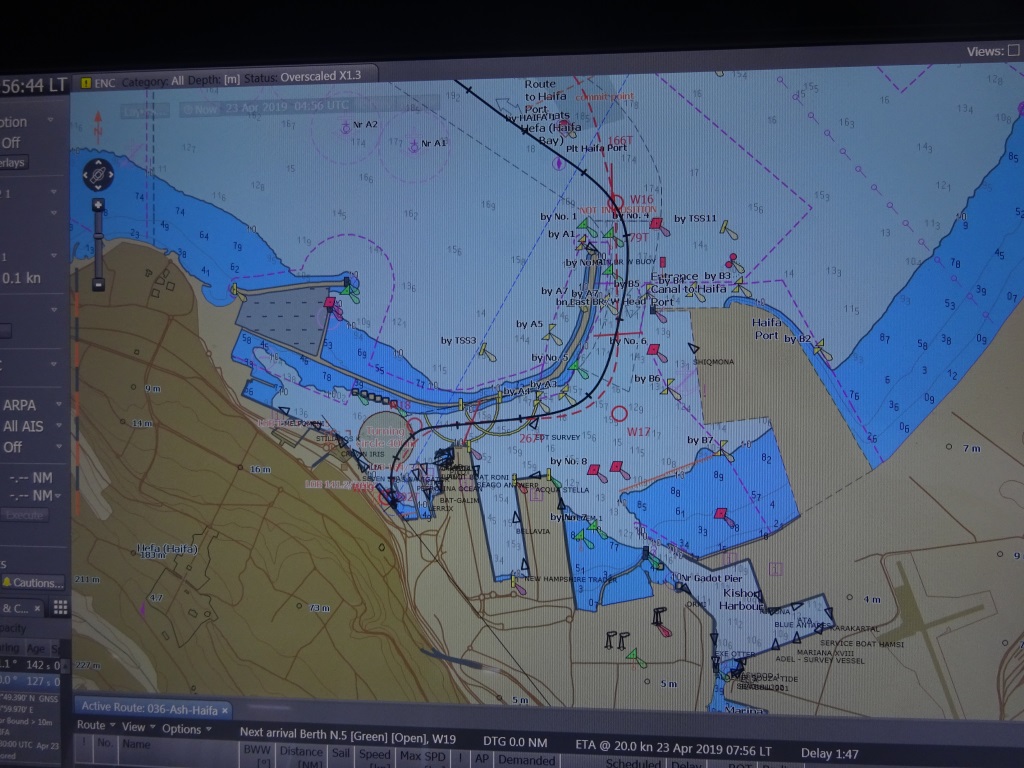 The approach into the port as documented on the electronic chart. All our courses and routes are stored when completed for future reference. The approach is a sort of a zig zag, first to starboard and then to port.

What they also have and that is less pleasant is irritating linesmen. Those who get paid high salaries (and I am not joking) to pull a few lines ashore when a ship comes in. The brethren we had to day had also attended advanced linesmen academy so they used a car to pull the lines ashore instead of just doing it by hand. But even then they were not willing to put the lines where the ship, supported by pilot, wanted to put them to create a safe docking for the coming 48 hrs. Luckily we are not expecting bad weather otherwise the ship would have had to complain to the harbormaster or had to send the sailors ashore to shift the mooring ropes ourselves.  It is a good thing that we do not carry rifles on board the ships anymore as these guys would have been prime contenders for a training session. Now we have some of our ropes, going almost vertical from the mooring deck down to the bollards on the dock. That sort of ropes might regulate the draft (ship going up and down or not) but will do nothing against the wind as there is no horizontal lead to counter act the wind forces. But we are in the shelter of the mountain ridge and not much wind is expected.

With us in port was the Seven Seas Navigator again which is not surprising as most cruise companies have similar schedules once a ship comes out of the canal. You either go left (to Egypt) or straight (to Cyprus) or to the right (to Israel). Once marketing has made the decision that the ship should go right, then it is quite certain that it will visit both Ashdod and Haifa. The only question is for how long.  We are staying two days here and this evening we will find out what the Navigator is going to do as she is docked right behind us, We have a 3rd ship in port and that is the Crown Iris. Israel has its own cruise company called Mano cruises and they sail to nearby Mediterranean ports on 3, 4 and 7 day cruises. This ship is a new ship for them, but it is an old ship built as the Royal Majesty. Then it became the Norwegian Majesty and then the Thomson Majesty and now the Crown Iris. Said to be three star quality but from the outside she looked very well maintained.

I had a question the other day from a guest: what would make us decide not to go to Israel? Well problems most likely and if that would happen, then Holland America / Carnival Corp. would follow the advice from the US State Department, as we have our head office in the USA. Cunard most likely would follow the advice of the British Foreign Office as their head office is in Southampton. Those travel warnings which would then be issued are not always the same. I remember from the world cruise from 1993 that the Rotterdam was following the QE2 out of the Canal and while still in the Canal they blew up a bus stop somewhere in Israel.  The US State department issued a travel warning against Israel and thus we deviated to Alexandria. The British Foreign Office did not do so as they saw the incident as a local incident and considered the rest of the country still safe. Who made the right call, I do not know.   We had on board approx. 400 Jewish guests from New York and they were not happy to say the least. But our beleaguered captain could only tell them, call your Congressman or Senator and complain as this is way above my pay cheque. I think some did but it did not get us out of Alexandria. 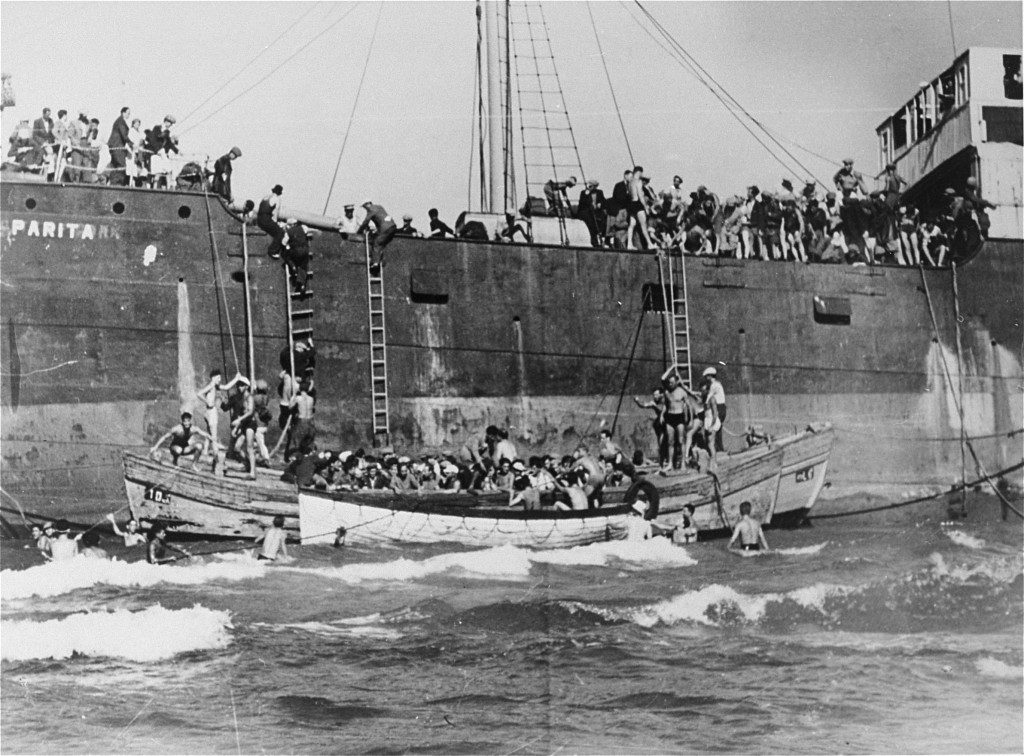 One of the old ships the Hanagah used. They drove the ships onto the beach and then used boats to ferry the “invaders”/ immigrants ashore.

So what do are guests here for the next two days? Well the same tours as yesterday (Now it is a 12 hr. tour to Masada and back) but also tours to the Golan Heights have been added, which are easy to reach from Haifa by coach. Haifa itself has a lot of antiquities to look at in various museums but there is much more. Because of my hobby, I favor the Israeli National Maritime Museum and the Clandestine Immigration and Navy Museum. The latter tells the story of how Jewish immigrants landed by illegal passenger ships before there was a state of Israel and in the period that the British Occupation still tried to keep them out. The Hanagah used old passenger ships for this purpose and tried to sail around or break through the blockade protecting the beaches. Thousands of emigrants reached Palestine that way, and contributed greatly to the formation of the State of Israel. For the rest it shows the evolution of the Israelian Navy since 1948. But there are more museums, quite a few of them the official National Museum for their particular focus point.

So we are going to stay here until tomorrow afternoon. Some guests left the ship yesterday to stay ashore for a 3 day overland tour, and they are also expected back by tomorrow afternoon. Weather will be the same but slightly warmer with 72oF / 22oC. and sunny but with a breeze in the afternoon.