Together with the Seven Seas Navigator we sailed along the coast towards Ashdod with the idea to arrive early as the clearance operations take time here. However the Navigator had to wait and we had to stay behind her and then she got clearance first. So the plan of sending the guests ashore, bright and early, did not exactly work out. We were still docked ahead of time but then we had to wait for the authorities to walk from one ship to the other, and once done they could finally start comparing all our faces with all our passports. (Everybody had to go through, Guests and Crew) Once that was accomplished you received a stamped landing card for going ashore. 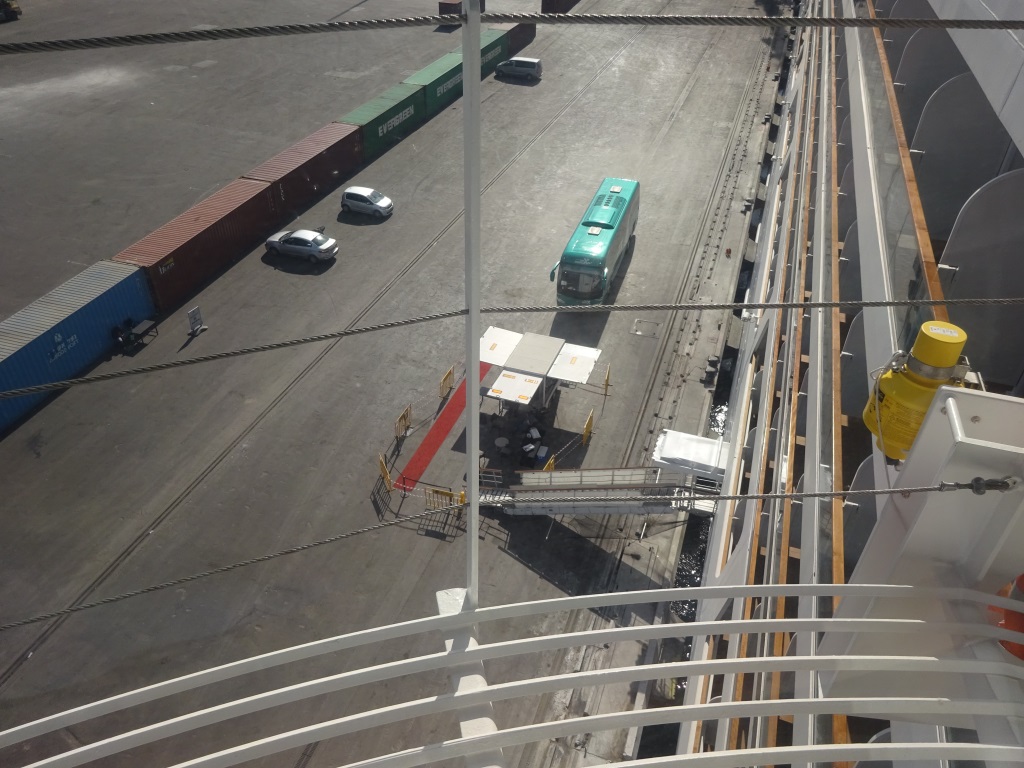 Extra, Extra Security at the gangway. This to complement our own scanning equipment inside.

When going off there was a mobile scanning post set up at the gangway and everybody was subject to a scan and a handbag inspection before they could board the coaches for their tours. Luckily we are staying until 23.00 hrs. tonight so the late departure will not result in a reduction of the tour time. As can be expected security is very tight here in the various ports and both cruise ships are surrounded by a row of containers with only a small entrance / exit for the coaches and the shuttlebuses.

Because it is a large industrial import and export port, we have a shuttlebus which takes the guests to downtown as you cannot walk on the dock. We are surrounded by containers to the portside and cars and agricultural/digging equipment to the starboard side. As there is no space in the port to further expand with more docks, all the docks are constantly full and there are many ships at the entrance waiting for their turn to load or unload. 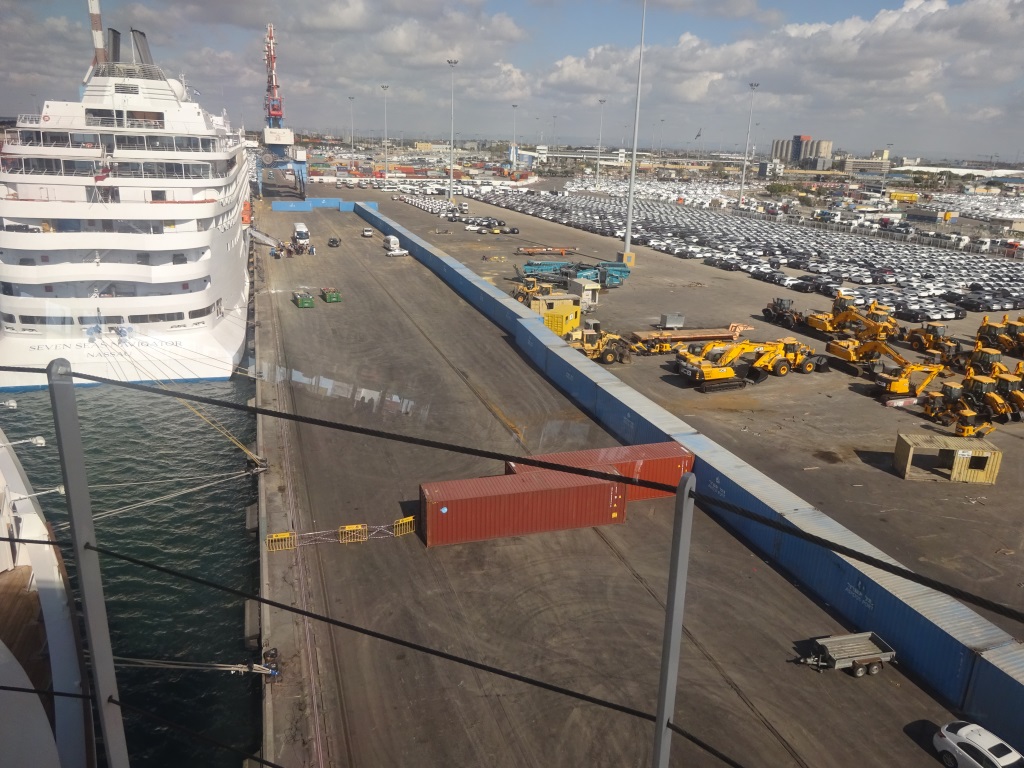 The docks of Ashdod. The two cruise ships separated from the cargo area by a long line of containers. The Seven Seas Navigator who was with us yesterday in the canal is about 2/3rds the size of the Ovation. The hull was originally a Russian Navy ship the Akademik Nikolay Pulygin and they rebuilt the hull for passenger accommodation. That always gives challenges with the stability and hence the ship has a duckfoot sticking out of the stern to improve stability by increasing the water surface area.

So what are we doing here? Short tours and long tours. The longest one is to Masada which takes 2.5 hrs. of travel time each way and thus in 11 hrs. in total; followed by Jerusalem, which has several tour options and the longest one lasts 10 hrs. Then there is Jaffa and Tel Aviv which only takes 5 hrs. and there is a half day Jerusalem which lasts 5 hrs. as well. The latter is the easiest tour as it is mainly sitting in the coach and seeing the sights. The ship is not offering any local tours as Ashdod is a very compact city and the local sights can be easily reached by taking a taxi. Ashdod is I think too small to have a hop on hop off bus system but there is one in Jerusalem and Tel Aviv. Most guests are on a tour, either on the big coaches, or with the mini buses which are more costly but offer a more intimate experience. A mini bus with 10 guests and a driver and a guide will set you back US 1300 for 11 hrs. but then you do get the best tour guides possible. My wife will be pleased to read that I saved myself $ 1300 today by staying on board.

Quite a few of our guests are from a Jewish background and some of them were planning to do the tours, some of them went on their own, and some went for family visits. The latter guests were to a certain point disappointed as they could not invite anybody on board; authorities here are very good in saying NO. Not everybody went off as quite a few had been here before, sometimes many times and they all decided to stay on board. Or they might save their energy for tomorrow when we are having an overnight stay. I think we have about 250 guests left on board, who either did not go ashore at all, or only for a short time.  Quite a few of them spent the day in the Spa and Wellness area on deck 10.

For the size of the ship, the Spa on board the Seabourn Ovation is quite large and well attended. It is run by the Dr. Andrew Weil a concessionaire which is the posh part of Steiner’s beauty which also has the concession on the Holland America Line ships. I know some of the girls from Holland America as they hop between the two sub-brands.  I am not into this beauty and message stuff but otherwise I would have had the chance to take a BIOTEC Super-charger facial for Men, $ 209, — for 50 minutes.  I did not do so, so today’s savings are already up to $ 1500,–  A super charger is and I quote from the booklet in my cabin, Regenerate the skin cells with a combination of 7 highly concentrated active complexes using plant steam cells and absolutes which can penetrate deeply in the skin. The supercharger boosts the skin with a triple hit of ultrasonic peeling and galvanic current to reactivate tired skin’s dynamism.

So I will see tonight how many men are super charged as for them and the rest who stayed on board, the ship will host a dancing under the stars party around the pool area. As the center pool is on all sides surrounded it is nearly wind still there and thus everybody will be sheltered from the cold wind that is blowing from the North West.  Today’s temperatures barely reached the 18oC / 65oF. and tomorrow in Haifa it will go down to 16oC / 61oF. and it will remain cool and breezy for yet another day. 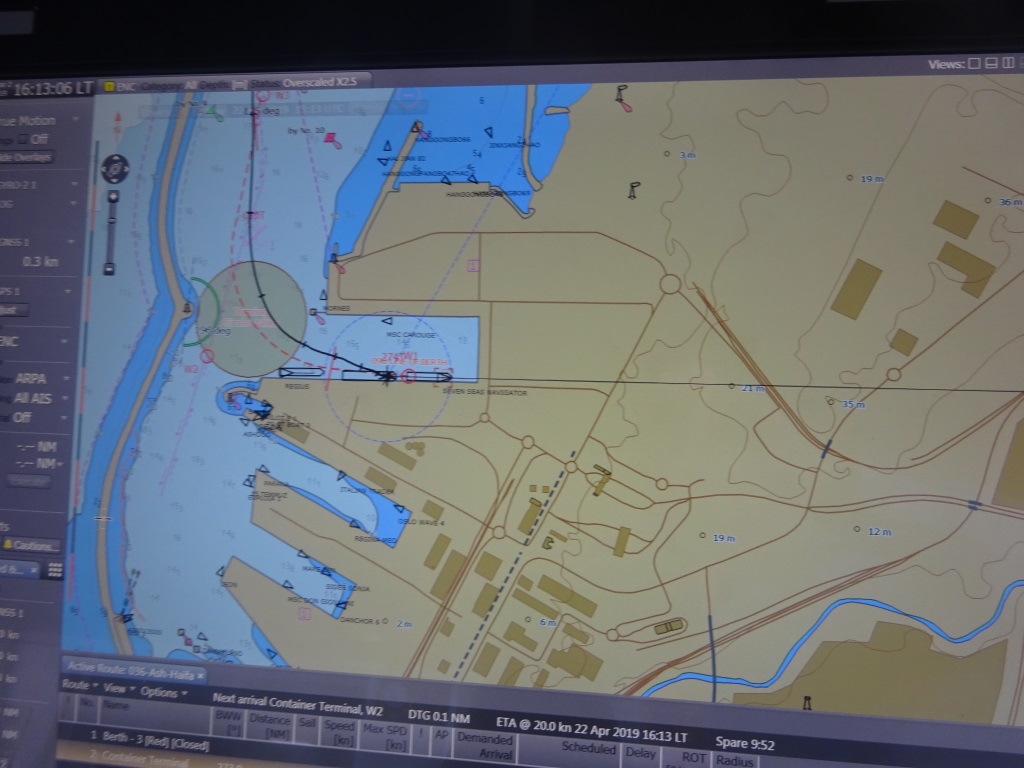 The port of Ashdod as on the electronic chart. Only a few docks and with many ships waiting there is considerable congestion. Luckily cruise ships get preferential treatment and we did not have to wait.  The black dotted line is the course we followed coming in. Ahead of us is the Seven Sea Navigator, behind us a bulk carrier and opposite us a container ship.

We will sail from Ashdod at 23.00 hrs. and even then we almost have to sail backwards as it only 70 Nautical miles to Haifa which is the most northerly port of Israel, almost at the border with Lebanon.  I expect that the captain will set the speed at 10 knots (minimum stabilizer speed) and then the navigators will simply sail in the large curve between the two ports. That will give the Israeli Coast Guard something to think about, but they might be used to it as Ashdod and Haifa are popular cruise ports and cruise ships always do strange things.