We arrived last night at 22.00 hrs. at the anchorage of Suez to make sure that we would be ready for the convoy once it started to line up. That “lining up” can be time consuming with the planned time not always happening. But the SCA (Suez Canal Authority) likes to have its chickens lined up well ahead of time so when the convoy can sail there is no delay. Hence we made sure that we were early, and made sure that we had paid our Suez Canal fee. Otherwise no transit.  The transit fee is calculated via a standard tariff scale which you can find on the internet. You take the Suez Canal Tonnage of the Seabourn Ovation of 44000 as the guideline. I came to a rough price of $ 176,000 as I did not calculate behind the comma so it might have been at little bit more. Suez goes by volume only, Panama has a surcharge for guests on board maybe because so many more cruise ships transit the Panama Canal.  The plan was this morning to raise the anchor at 04.00 hrs. and then to be in the canal by 06.00 hrs.

That did not happen. Yesterday afternoon at 17.30 hrs., a southbound Containership (a big one  of well over 10,000 TEU containers) developed engine issues and ran aground at the mileage marker 133. So while that ship was freed and escorted to the anchorage at Port Tewfik, all the ships behind were delayed.

The Radar Picture while at the anchorage. All anchorages for the convoy of the day traffic are all clustered very close to the entrance to the canal. The orange circle is the safety circle for the ship swinging around the anchor. The navigator can at once see if the swung being made is safe and within the parameters set.

That had a knock on effect for the night convoy and thus we were ordered this morning to be ready at 07.10 hrs. to commence the transit with 27 ships. There is a pecking order in the system with the faster ships (navy, cruise or container ships) going first and then the slower ships follow. We were ship number two in the convoy, with one containership ahead of us and one cruise ship behind us, the Seven Seas Navigator. Then there was a whole slew of big box boats each raising the anchor about 5 minutes apart, so they could sail through the canal at about 1 mile apart. Then there was a short delay for reasons unknown as the pilot for the first ship was delayed but by 07.50 we entered the buoy route from the anchorage leading to the Canal.  For the stretch from anchorage to canal proper there is a separate pilot and he left abeam of Port Tewfik (which is the port of Suez) at the entrance to the Canal. 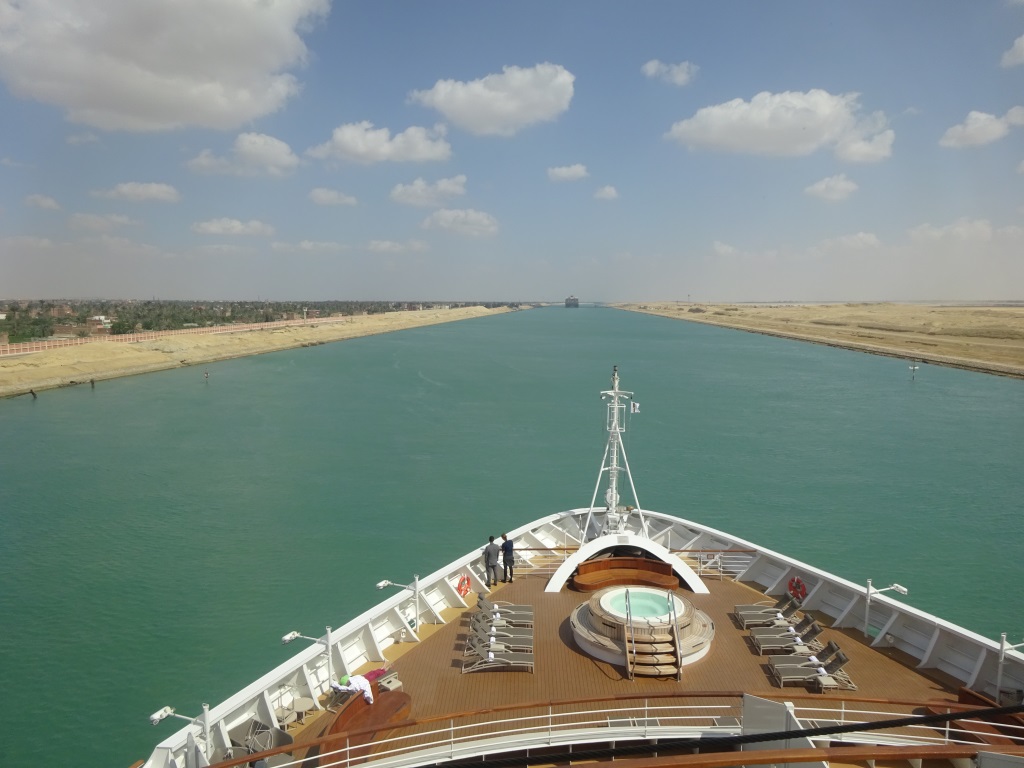 This is the beginging of the Canal from Suez / Port Tewfik. Here is the convoy still operates as it was designed for. One way traffic only.

I mentioned the words mileage marker. Along most of the canal there are signs at every kilometer giving the distance from Port Said to Suez. That is a distance of 164 Kilometers. The whole canal (sea buoy to sea buoy) has a length of 193 km or 120 Nautical miles. And since 2018 when they doubled most of the canal the average depth is 24 meters with it being 205 meters when counting both fairways.  Speed going through should be on average 10 to 12 knots giving an average transit time 10 hrs. again from sea buoy to sea buoy. 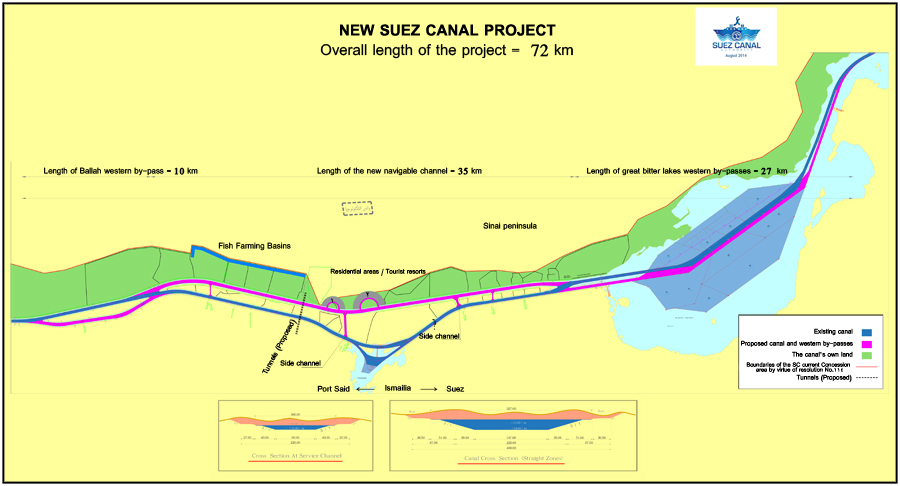 The Canal diagram as produced by the SCA. The pink line indicates the 2104 – 2018 improvements and the creation of a 2nd fairway.

We started out with a speed of 11 knots but that came down already quite quickly to 8 and then 7 knots. According to the pilot there was “something” and so we went not as fast as we had hoped for. I never found out what that “something “ was. Due to this project from 2014 where by 72 KM of Canal was doubled and dredged, the convoy system is only really needed for the part from Suez to the North End of the Bitter Lakes. But you cannot do a convoy for part of the way and then a free for all for the rest so the convoy stays in tact all the way. Because as the pilot said, there is always “something”, it makes sense I suppose. 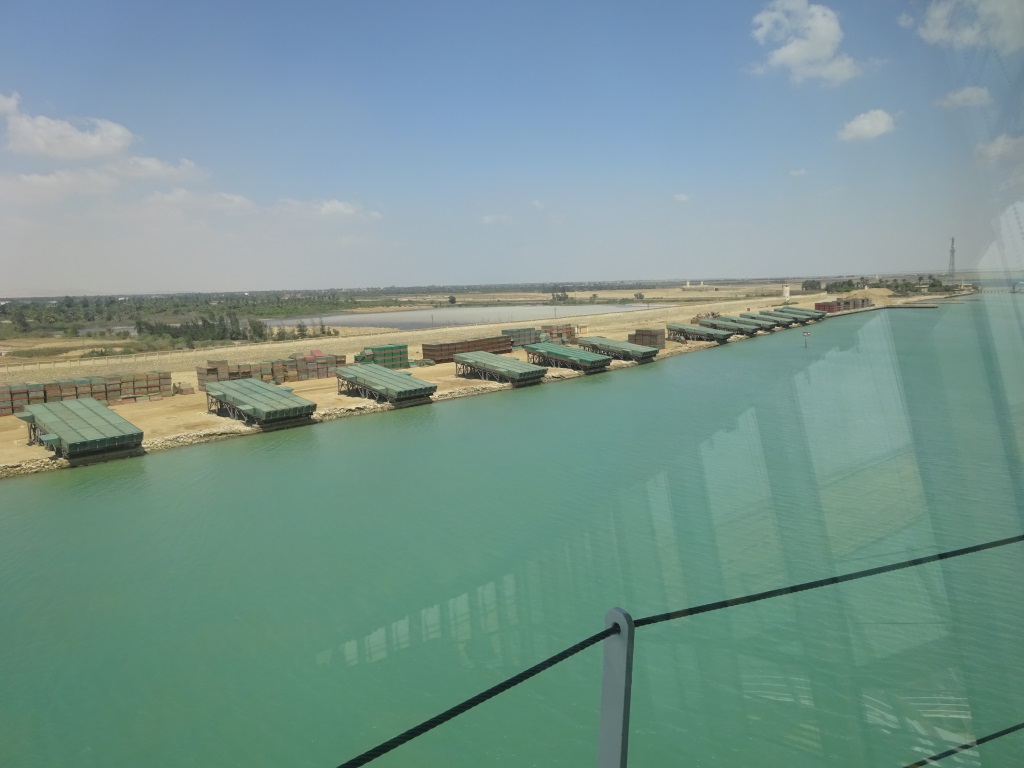 At regular intervals there are these series of pontoons stacked along the West side of the Canal. Just push them in the water and you can quickly create a crossing bridge,

Until the Bitter lakes, one side of the canal is quite green on the African side, while the Sinai side is completely barren. The green vegetation is possible as there is an irrigation/water supply canal next to the Suez Canal which was dug to provide water for the diggers of the canal in the 19th. Century and it is still in use.  What is also very prominent along the whole length of the canal are the stacked pontoons on the shore side. They are a regular re-occurrence and are there to ensure that the military can quickly cross the canal if necessary. 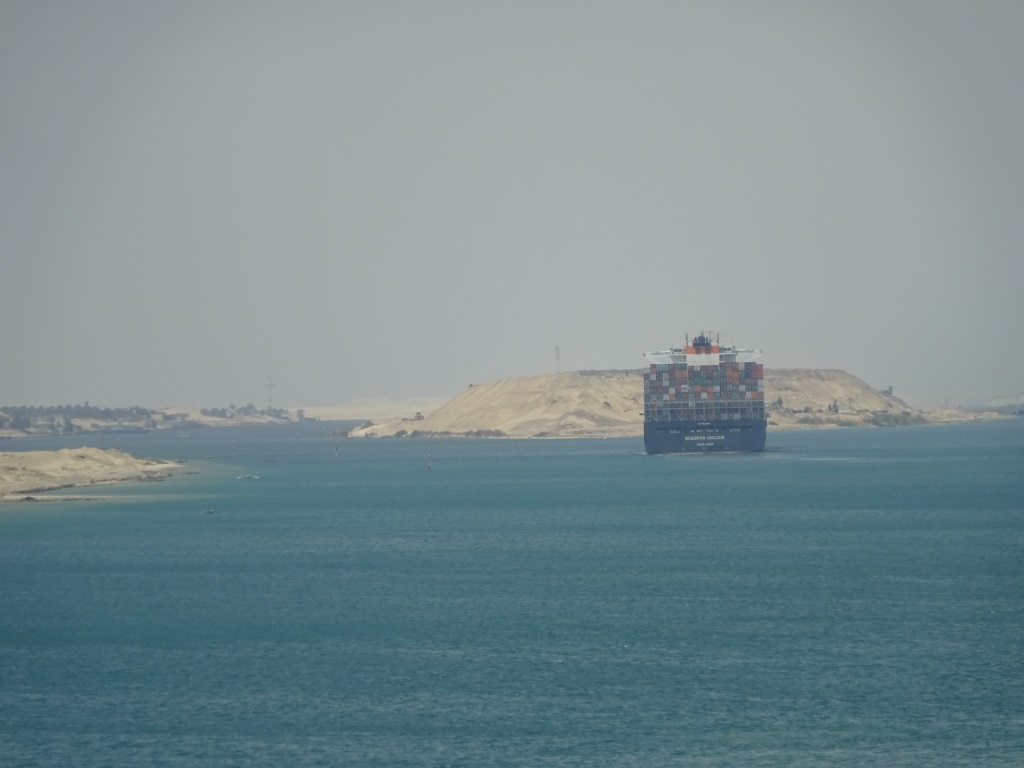 This is were the North side of the Bitter Lakes end and there are two canal fairways split as the Canal starts, Northbound keeps the right lane. The old canal is the left part which now serves the southbound traffic.

The Suez Canal was constructed in the way it is because the route could use three lakes which were already there. Lake Temsah, which was taken in use as a natural harbor for all the equipment of the SCA and the little and Great Bitter Lake which offered the option to create a split fairway where the North and Southbound ships could pass each other. The 2014 extension made it possible to have two way traffic all the way from Port Said to the South side of the small Bitter Like (Al Buhayrah Al Morrah a Sughra). Between 1967 and 1975 when the canal was closed, 15 ships were stuck in the canal and they were all anchored in the Great Bitter Lake. The crew who were marooned on board enjoyed themselves quite well, by organizing games, sports, movie nights and related. In 1968 they even held a mini Olympic Games with a British Newspaper providing real gold medals. 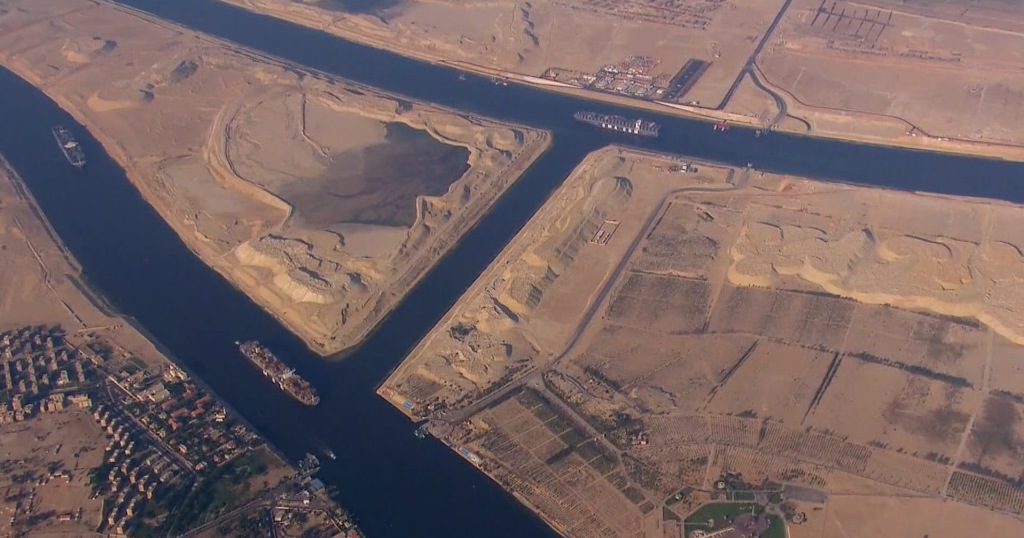 An air photo by the SCA, showing Ismailia. There is a cross channel here to enable pilot boats and other craft to move from one fairway to the other. The top lane is the Northbound lane.

The change of the 2nd pilot is at Ismailia which is the nerve center of the canal. This is also the area where the most intense fighting took place in the various wars and thus there are memorials to the 1918, the 1956, 1967 and the 1973 war. Then there are additional statues for the workers of the canal, the reopening of the canal in 2018 after this doubling of the canal and a really big sign proclaiming the founding of a mega new Ismailia on the East Bank of the Canal. This is a boom town that can handle over a 500.000 peoples and all the apartments are already there. The SCA is expecting to need a lot more labor to maintain the canal but also an economic boom because of the canal expansion. I do not know if that is going to happen as nearly all the traffic for the canal is for transit only, so the ships will not stop. But all the apartments and the mosques (very big ones) are already there, The Egyptian Government has also announced that the new city will take the overflow of Cairo and the related area and they are very busy to put the necessary infrastructure in place which includes 7 new tunnels under the canal. 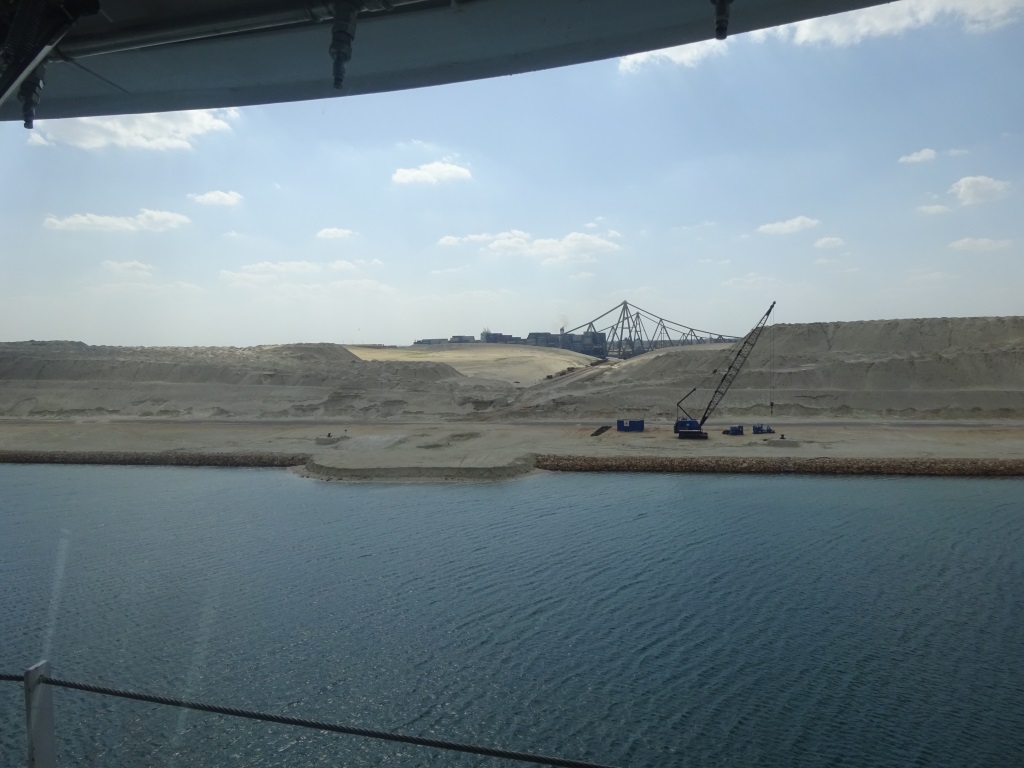 Because the sand is piled so high you can hardly see the ships anymore which are in the South Bound lane. Here a very large containership just peeking through a gap. Next to it is the Ferdan Railroad bridge which is going to be replaced by a train tunnel.

The sand that has been dug out for the widening and creating the new South to North Fairway of the canal has been deposited in the middle of the canal, creating an artificial range of Dunes which will help against the strong winds that can blow over here. Today we had strong winds from the North but these winds were in line with the direction of the Canal (mainly north south).  In the Bitter Lakes, which are aligned NW/SW, there is room to drift and thus the ships did not have many challenges. But when there is a desert storm rolling in the ships have to stop and sometimes go alongside the bank as it is impossible then to stay in the middle of the fairway. For that purpose, each ship carries two mooring boats. We also hoisted this morning two of these mooring boats up with a crew and if needed they would take the ships ropes ashore and then the ship would winch itself against the bank and sit there until the storm was over.  Today our boat friends had an easy day and spent their time sampling the food in the various mess rooms on crew deck. 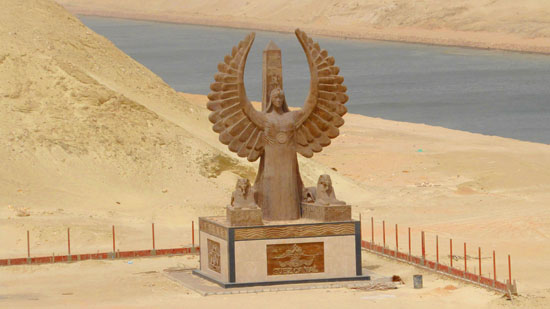 This statue is called the Spirit of the Lake commemorating the Canal itself. 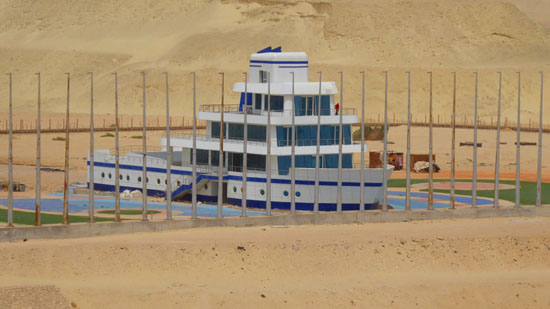 More unusual is the new building of the SCA, the Suez Canal Authority who has built a yacht like structure in the separation zone between the two fairways at Isamilia.

After the pilot change at Ismailia it is 68 kilometers to open sea and the main point of interest is passing under the Friendship Bridge or Al Salaam (Peace) bridge.The bridge was constructed by the Egyptians and the Japanese and thus called the Friendship Bridge. Then it was called the Hosni Mubarak (the previous leader of Egypt) Bridge, but as he is gone, they changed it to the Al Salaam Bridge. The 2nd fairway which runs parallel to the old Suez Canal, and serves the Northbound traffic, ends near Port Said where they had already dug a 2nd exit/ entrance. Port Said did not have room for container ships so a complete new port was built on the Sinai side with its own entrance /exit to the docks. Now with the 2nd fairway, the connection was made and the northbound ships now exit on the east side and do not see much of the old entry to the Suez Canal.

We expect to be out of the Canal at the latest by 18.30 hrs. maybe earlier if the ship can quickly release the mooring boats. Then we will sail north along the coast of the Sinai Desert, the Negev Desert and then Gaza and Israel until we come to our next port of call Ashdod. The Israeli authorities are conducting a full face to face inspection upon arrival so we all have to show up with our passport on arrival and look like our pass photo. This was for me an interesting day, as the captain had asked me to keep up a running narration while going through the Canal for the guests in the Observation Lounge. I Thought that after 40 years at sea, I had seen it all, but this was a new one. Still interesting to do as it had been a while since I had gone through the canal.

Weather for tomorrow:  65oF / 18oC sunny skies and a strong breeze in open waters and somewhat less inside the port. Nice temperatures to go sightseeing but it will be chilly in the mornings until it warms up. 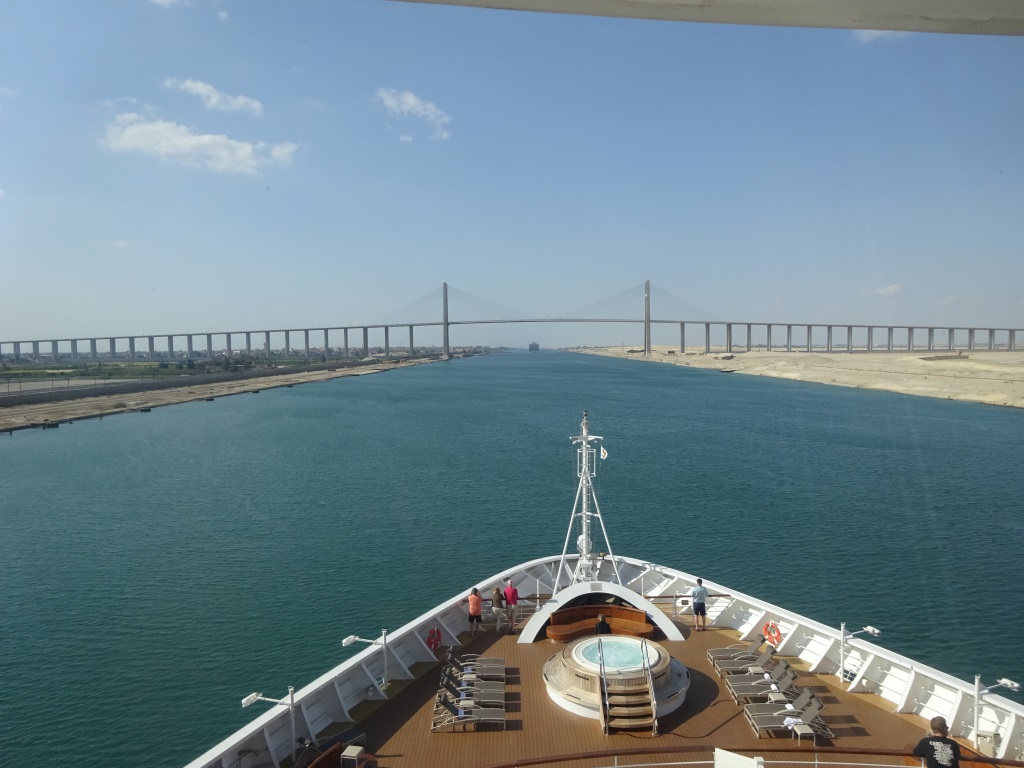 The Peace or Al Salaam Bridge at Quantara. It is not very busy with traffic yet but it will be when the 500000 new inhabitants have moved to New Ismailia.