I normally go for breakfast at 06.00 in the morning as it gives me an hour to review the class material for the day and when I went up to the Lido the weather did not look good. Dark clouds were gathering over the northern part of the island and there was rain in the distance. But it turned out well as shortly after, when the sun arose above the horizon; all the dark bits disappeared overseas. The sun came out and although it was sometimes more cloudy than sunny, it was a perfect day for the beach. We were in port together with the Carnival Dream and once both ships pushed out the gangways a relentless stream of happy guests rolled ashore and a lot of them straight onto the beach. 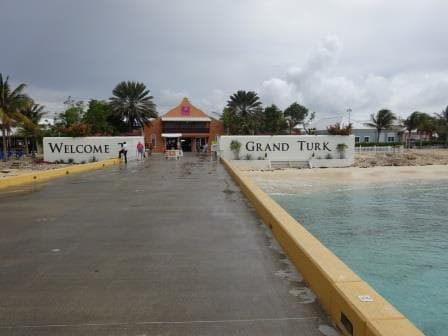 I took this photo last cruise, as today this welcome sign was obstructed permanently by the continuous flow of many guests between ship and shore.

I did not have a camera with me so I missed a priceless opportunity of taking a unique photo.  At about 9 am, while there was still a wave of guests coming out of the ship, an old Gentleman with a Rollator was slowly making his way towards the beginning of the pier with the duty free shops. Because he was going so slowly and the rest was going so fast, the overtaking guests passed him on both sides. It really looked like a stone in the water and seeing a strong current rippling passed it on both sides. It did not deter him in the slightest and he kept his slow but steady pace towards the terminal.

That was about all I saw from the outside world today. I have taken over the Training Room on board and that space is located on A deck which is the highest crew deck and also the deck where the Tenders are leaving from. It has a small porthole but it is always closed as otherwise you cannot see the screen with the power points.

The numbering of the decks on our ships sometimes  gives reason for confusion. In the old days the decks only had names and the crew decks had letters. With the arrival of the more modern cruise ships we also numbered the decks but the names still prevailed. Then it became compulsory (starting with the Rotterdam in 1997) to have the decks numbered and the cabin numbers correspond to it. This resulted in 4 digit cabin numbers.  What was on the S class cabin 103 now became on the R class 7103. Seven being the boat deck and the 7th deck above the lowest crew deck.

With the arrival of the Vista Class, the emphasis came on the number and less on the name. This made sense as most guests could not remember the names of the decks anyway and went up and down in the elevator in the same way as ashore.  Nowadays even the crew members do not always remember the names of the decks. If they live higher up in the ship, they live on deck 7 or deck 8; they will seldom say Rotterdam Deck or Navigation Deck.  Again it is a little thing where modern regulation has pushed company tradition a little bit to the side.

I was bumped up for the coming three weeks from an outside cabin on Main deck – Deck 1 – amidships to an inside cabin on Rotterdam deck – Deck 7- ps. Aft.  I do not mind what sort of cabin I have, as long as it has a good bed, a shower and no singing neighbors. A large cabin is not always an improvement if you are working on board.  I once ended up in the ships Penthouse, which is very large, very luxurious and very impractical if you are working. It already takes you 5 minutes to switch off all the lights before you go to bed. Too many lights, too many options and too many hotel switches. (If you switch off something with one button, it comes back on again with another button)  This time I have a very quiet cabin; to my right is the steward station and to my lift is the emergency staircase. And as long there is no emergency, it is very quiet in that staircase.

The team had engine room familiarization today, courtesy of the Staff Chief Engineer. This consisted of a march through all the spaces with all the safety features being pointed out. In the coming days we will review those systems in theory and then later on they will all get the chance to push buttons.

Tomorrow we are in San Juan, so at 3 pm the Westerdam put the pedal to the metal, swung away from the dock and raced back into the North Atlantic. The Carnival Dream was still trying to get the last stragglers from the beach back on board and missed her planned sailing time.

We expect to be at the San Juan pilot station at 10.30am and to be docked just before our official arrival time of 1200 hrs. Weather: Scattered Thunder storms, 86oF / 30oC. If we send out sufficient positive vibes then those thunder storms might stay over the Rain Forest and not come too much to the North and over the port.