I almost thought we were the biggest ship in port today but it was not the case. When we docked we had the Seabourn Odyssey next to us and an old Seabourn ship, which is now sailing for WindStar, at Pier 1.  But then at 14.30 the Celebrity Silhouette arrived and that ship is with 122,000 tons considerably larger than our Westerdam.  I was working with two sailors and a cadet on deck when I saw an ambulance waiting at the empty dock nbr.3. An Ambulance is normally a clear sign that a cruise ship is coming in and yes shortly after it came around the corner.

This afternoon I spent some time rigging up a wooden wall for a coming damage control drill. The Vista Class is different in layout than the S and R class and it means I cannot use the aft mooring deck but had to create something on a passenger deck. So today I designed a rolling ships bulkhead with holes, which we will roll into position when it is time for the drill on Thursday. You will see the results then on Thursday         ………..probably photos with a lot of very wet engineers.

My class was being indoctrinated at the same time by the Safety, Environmental and Health Officer. Every crew member has to go through basic environmental training about recycling, conserving energy, working safely etc. etc. The higher the ranking is, the more training there is, and the more complicated it becomes.  I make sure my students get the chance to do this during their period with me so it will not conflict with their working or rest hours once they are on their own ship.  After the training course the S.E.H was taking them on a tour of the ship to explain a bit more about the history of all the improvements which we have made in becoming more and more environmentally friendly and what we are still working on. Some of that is software (training the crew in procedures) and some of it is hardware. 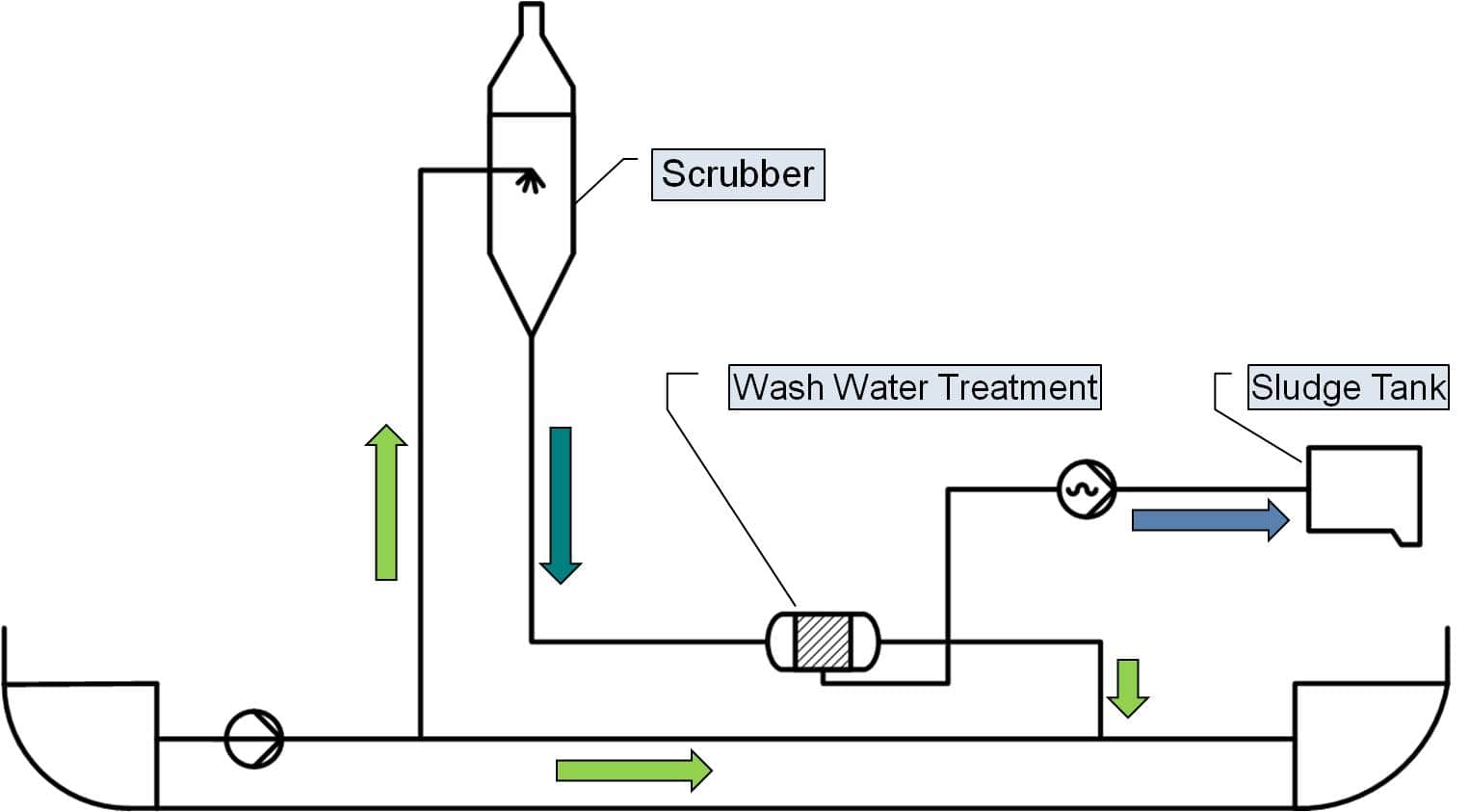 Without going into too much technical detail, the system is simply a washing system working on sea water and nothing goes over board but is collected and stored. (Courtesy www.Motorship.com

The HAL fleet is currently busy with installing scrubbers which reduce the emissions of the ships. A number of years ago we made the change from regular fuel oil to sulfur free fuel oil. This was a big step as all the engines had to be adapted to be able to burn sulfer lean fuel. This made the emissions of a ship a lot better. Now the next step is to clean out what is still left in the exhaust gas. With a simple description we call it “particles”. Most of those particles you see on deck as soot.  As I am not an engineer at all, I describe a scrubber as a sort of washing machine which uses sea water to wash, scrub, and rinse out all the soot particles.

Here on the Westerdam they are in the final testing phase. Installing it on a car (a catalysator) is much easier than doing the same on a ship. A car just drives down the road. A ship bounces and rolls down the road. With the ships movement there is always a little variation in the engine output, the outside temperatures varies greatly from day to day and also the fuel which we bunker is not always exactly the same. Ashore when you tank Shell V- super (I do not know if you have that in the States but it is a premium petrol option) then you get the same quality at every pump, wherever you are. Not so with ships bunker fuel. What you order is in compliance with the standards of the type of fuel requested but as those standards are not that tightly defined you do not get the same in Piraeus as in Amsterdam.

Eventually it will mean that all Holland America Line ships will have solved both the issues of pumping things overboard, and puffing things in the air. For a few years now we have had Zenon which cleans out all the grey and black water and now we will also have nice and clean exhausts. Apart from those ships that run solely on gas turbines (which burn gas oil) we will have the highest standards in the industry.  Next step will be the arrival of more and more ships which run on LNG and that does not have any exhaust at all. The first cruise ships with this system have been ordered and no doubt more will come.  It is an exciting time to be an S.E.H Officer.

Tomorrow we will be in St. Thomas and we might be lucky again. During the day here in San Juan the rain stayed away and the sun caused a nice and warm day, and it looks like  in Charlotte Amalie, St. Thomas that it will be partly cloudy / read partly sunny with temperatures of 84oF / 29oC. That might cause difficult decisions to be made by the guests. Do we take the children to the beach, or do we go shopping??