After a rainy departure the ms Westerdam crossed the Straits of Florida and sailed through the Bahamas into the North Atlantic Ocean.  We are now fully in open waters, the sun is shining and is providing a beautiful day for all on board. The ship is full of happy family’s and the children are all over the place while the Club HAL attendants are trying to keep them occupied at various locations. We have a dedicated area for children behind the funnel on Deck 10 but during a cruise like this the Club HAL area, although quite large, is much too small. Thus the three conference rooms and the Disco have also been taken over. And listening to the amount of noise coming out when I walked by, it seemed that a good time was had by all.

Sometimes we can even be too successful. It is not unusual for children to be reluctant to go there during the first day, then starting to like it so by day 3 you cannot get them out anymore. I have seen small dramas been played out when the parents try to get “little Johnny” to come to the dining room for dinner and the little man is steadfastly refusing to do so. Being among peers, not being told off by parents, and having the choice to eat pizza instead of turkey, does not make for a difficult decision.  These are our future customers so then Holland America is not going to be skimpy on pizza.

The Club HAL program is an integrated part of our operation and each ship has a Club HAL location on the top aft deck.  All ships except the Prinsendam as that is completely designed for different cruises. But there is a Club HAL person on board if and when groups of children are expected and then a regular public room is used. 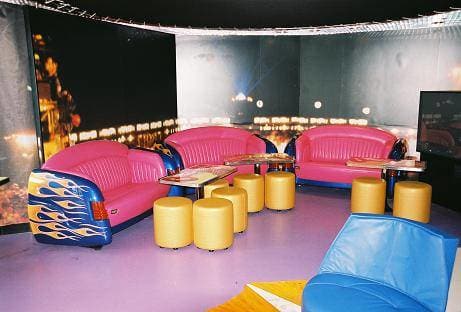 Because they work with children, the selection/vetting of Club HAL staff is very rigorous to ensure we get the best even if they are part timers. Normally there are two or three staff on board but the company norm is at least one for every 20 children and thus we have part timers as well. Quite often students who are studying to become teachers or for other jobs where one is working with children and they come out during the vacation periods. Then we have more children on board and these students have the same vacation time as well. They get a minimum of a free cruise out of it and the ports off while practicing the work which they have chosen to do for the future.   A win, win for everybody.

I expect that the other cruise ships on the 7 day run this week will be as full of families as we are. The Carnival ships might have even more children on board than normal and it will change the make-up of the crowds in the ports considerably. We will be together in Grand Turk with a Carnival ship and I have the vague suspicion that the beach next to the pier will be heaving.  I remember from my young days that we used to stake out sections of beach for the group/gang which you belonged to, we then dug a hole and used the out coming sand to build a wall and then protected it until our last breath from the assaults (normally with buckets of water) of “the others”. Maybe we will see a similar sandpit battle of HAL against Carnival.

In the meantime my 5 new officers have started class and today they went through the first of many of the indoctrination sessions they will have to absorb. This morning was with the rest of all the newly boarded crew and they got a parade of a whole group of persons who needed to speak some wise words.  In a nutshell:

Captain – welcome on board, work as a team and enjoy yourself

Environmental Officer – Do not throw anything overboard and save the planet.

Human Resources Officer – Make sure you complete your paper work and turn it in on time.

This whole parade takes about 45 minutes and then there will be further trainings and explanations in the near future. Only my group will be stuck with this sort of stuff for the next three weeks. But better to digest it slowly than having to absorb it all at once when you start working, and it is an awful lot.

Weather for tomorrow in Grand Turk, real Caribbean weather: partly cloudy, temperatures around  85oF or 29oC and a gentle easterly breeze.