Then suddenly it got warmer around the ship in early evening of last night.  One would expect that it would cool down after dark and it did, but not that much. This sudden change was caused by the fact that the ship left the colder Benguela current and entered the warmer Angola current. We are getting into sub-tropical waters again.

As all the world’s oceans are connected there is a constant movement of water going on. Caused by the rotation of the Earth, by the pull of the Moon and the Sun but also because of constant winds such as the Trade Winds. As a result there is a flow around the continents but also rotating currents that circle between the continents. 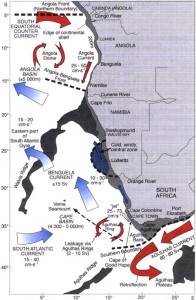 The Benguela current comes from the south, from the Antarctic area and pushes cold water north along the west coast of the southern part of Africa. The winds which blow predominantly from the south along the coast of Namibia (something we witnessed in the past days) help to push this current up towards Angola.  Here it meets a down coming current, the Angola current which is part of this rotating system in the South Atlantic Ocean.  The approximate area where the Benguela current moves away from the coast is near Cape Frio, the cold cape, which makes sense in a way.

So in a couple of hours, the sea water temperature went up with nearly 6 degrees Celsius. Six degrees do not sound that much but taking into consideration how large this body of water is, six degrees is an enormous amount of energy that the sun had to spend to get it that warm.  It also has a direct influence on the outside temperature as the cooling effect of the cold seawater on the air has fallen away. Basically the temperature last night did not drop anymore from lunchtime but remained the same at 77oF or 25oC.

Tomorrow the temperature will vary again during day and night time but then at a higher level as we will remain in warmer waters now. It will not be until we are a long way past the equator before the sea water will get cooler again.

Most of this happened outside the scope of the Trainee’s in our little school class, who tackled today the art of giving training. At least the 8 deck officers. The 5 engineering officers were engrossed in pipes and steam and propulsion systems but the deck group needed to learn how to perform. At least that is the word I prefer to give to it.  If you want to pass on knowledge then the better your performance is in front of a group, the better the chance is that they will absorb at least something of the training/instruction that is been given.

Public speaking is not something everybody knows how to do and not everybody likes to do it but ground rules can be learned and that will then make the experience for audience and trainer already a lot better.  Apart from that the presentation itself is important. Not only the contents but the structure of the presentation. A lot of trainings and presentations do not have the desired effect because there is no structure or –even more important- there is no ending. It suddenly stops as the speaker has run out of material. Then the audience will only remember the “black hole” at the end and not the message that had to be brought across.

So today we spent time on what to train; the topic was lifeboats and life rafts, but also to ensure that each training had a beginning, a middle part, and an ending. And if possible that ending should have a cliff hanger. One wise sentence that the group which has received the training will take with them and remember.

Tomorrow, in two groups of 4 they will have to give a 20 minute training presentation. I will be less interested in the contents than in the way that they will engage the audience to get the message across.  If that all works out, then it will be a half day for them, and they can go ashore and explore Luanda in the afternoon.

We are expecting to dock around 07.00 hrs. The clearance should take about 90 minutes so everybody should be able to go ashore by 08.30. Noon temperatures are expected to reach 84oC or 28oC.